Not so long ago the thought of getting on a plane and actually travelling seemed like a pipe dream, but in November 2021 things were looking up. Borders were opening, planes were flying, rapid antigen tests were... available, it seemed like it was time to plan the next adventure. Ever since our Tasmania Overland trip, we had been itching to get back to Derby, so Nick, Naomi, Matt and I met at the pub for some beers and a vague discussion of what else we want to do in our next trip, Tasmania: The Sequel. Of course, this night at the pub just happened to end up being a close contact to a covid case so we all had an annoying period of isolation, but thankfully didn't catch it. Little did we know, this was only the first of many curve balls which fate had in store for us. 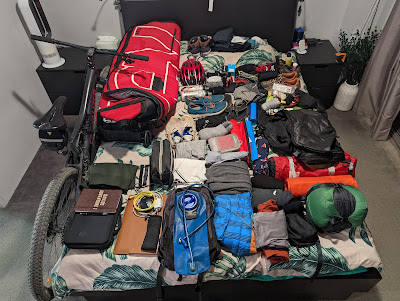 Fast forward to January, when the situation worsens, PCR tests are impossible to get and mandatory RAT testing comes into effect. I also unfortunately catch covid at my NYE party and spend most of the first fortnight of 2022 in bed. Thankfully I recover, and read negative on a RAT in time for our flight and we all get on the train to the airport, P2 masks donned ready for the short hop down to Launceston. It's a miserable rainy morning in Sydney as we drag our bikes and hiking packs around, and we're on the train with plenty of time... until there is a signal failure at Central. The trains crawl and we reach the airport well after the official luggage check in time has expired, but thanks to some actually helpful air crew staff we manage to get our bikes and ourselves onto the plane. 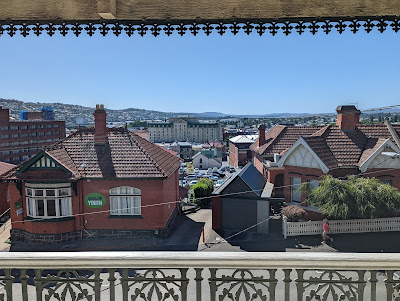 Upon arrival at Launceston the weather is sunny and beautiful as we collect our bikes and head for the city. It's still early in the morning and we can't check in to our airbnb until after 2pm so we leave our bags at the house and wander the city, sampling some of the local art exhibitions on display as part of MONA FOMA. Now I like to think I can appreciate art, but some of these things are just a little... odd. After visiting MONA in Hobart on our last trip I should have expected the 3 large screens showing variations of a CGI rag doll drinking whiskey and sticking their nose through a small circular hole in the wall, however I wasn't quite ready for when they stuck a different appendage through said hole. (Spoiler: It was not at all glorious) 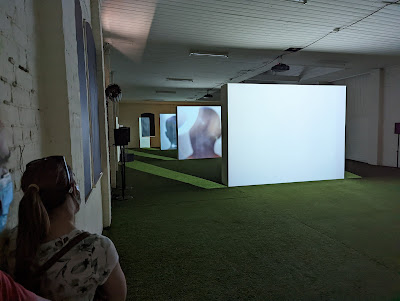 By the time we could check in to the airbnb we were all exhausted and went to our respective rooms for a quick nap before heading immediately back out for the "MOFO Sessions" outdoor concert. 3 of the 4 acts were quite good, but there's always one slightly too weird one in these kind of sessions, however it was fantastic just to be sitting outside on a picnic blanket enjoying live music with friends. For a fleeting moment we could almost have forgotten about the whole covid thing, until of course, the next morning. 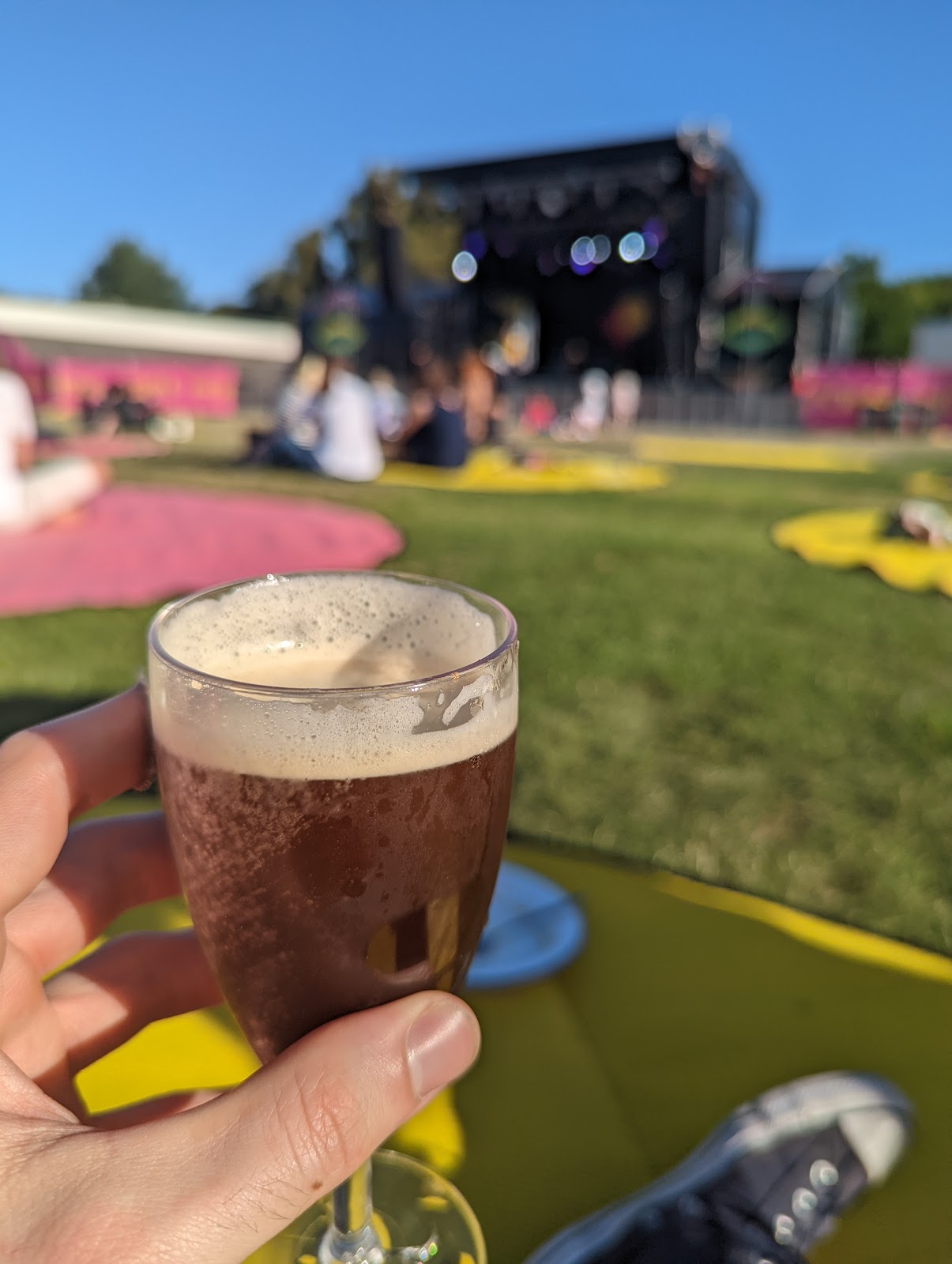 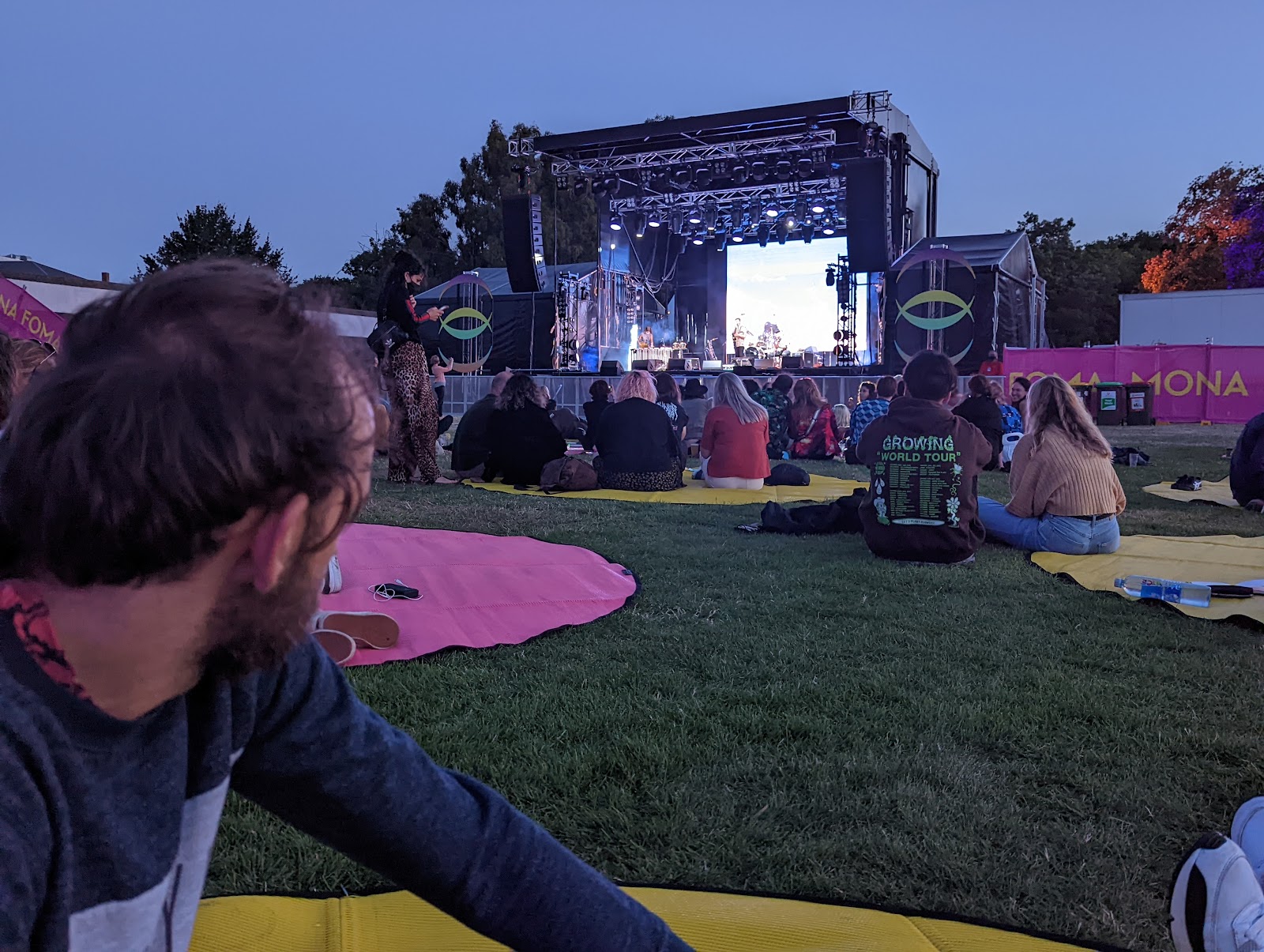 Matt wasn't feeling 100% so had gone straight to bed after the concert, and when he still didn't feel well in the morning he did a RAT test. "Naomi, I'm positive" he yells through a closed door as we start figuring out exactly how many minutes we all spent together indoors/outdoors/with masks the previous day. Thankfully due to a number of lucky happenstances, none of us had actually been with Matt for more than 4hrs so we got him the supplies he needed and (nicely) locked him in his room for the next 7 days. 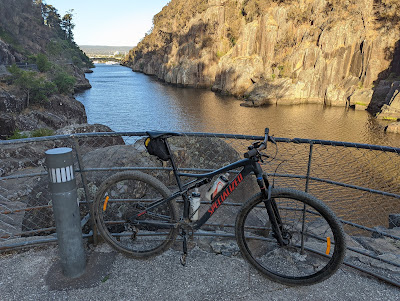 We spent the next 3 days in Launceston, taking RATs every morning to ensure we stayed negative but then were able to continue on our trip one member short. To be honest, we were very lucky that the trip didn't completely end for all of us at this point, but between my previous covid infection and Nick & Naomi's booster shots we got through it! Matt also recovered quickly and was able to catch a bus to Derby and meet up with us after his isolation. 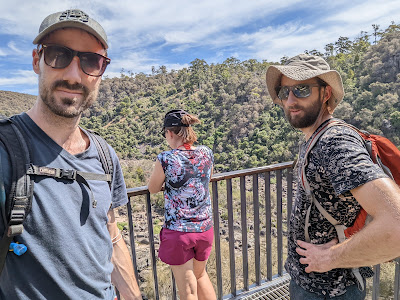 Having been to Launceston before, we took those 3 days fairly easy, constantly doing things or eating things like it might be our last day of freedom based on the roll of the RAT. We went swimming in Cataract Gorge, did a bit of mountain biking in the Trevallyn hills above, and explored the Tamar Island wetlands with a short bus trip north. The wildlife in the wetlands was amazing, and mostly experienced from a boardwalk above the swamp and mud. We saw swans, blue fairy wrens, and even a couple of plovers (aka Jeffreys). 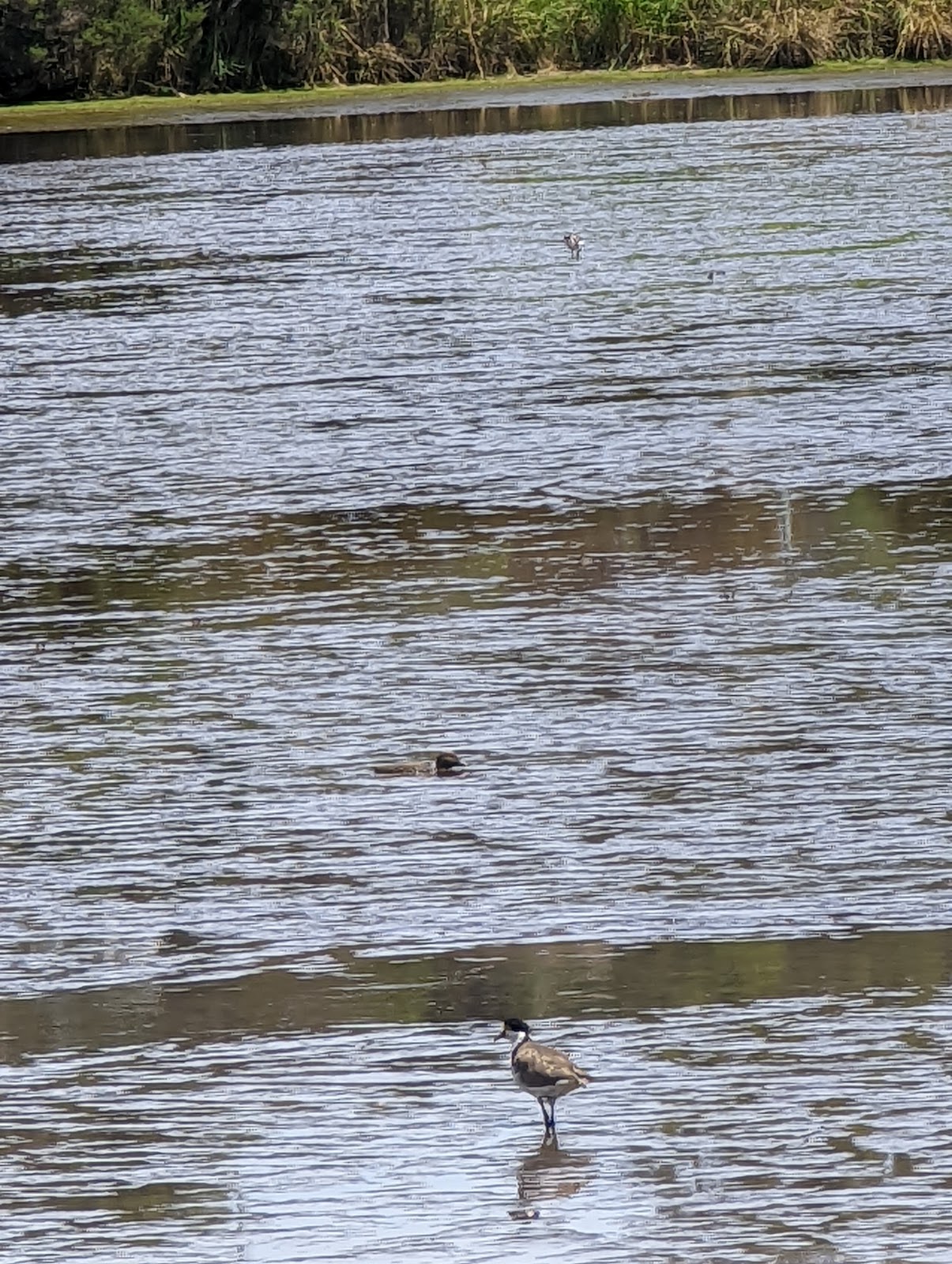 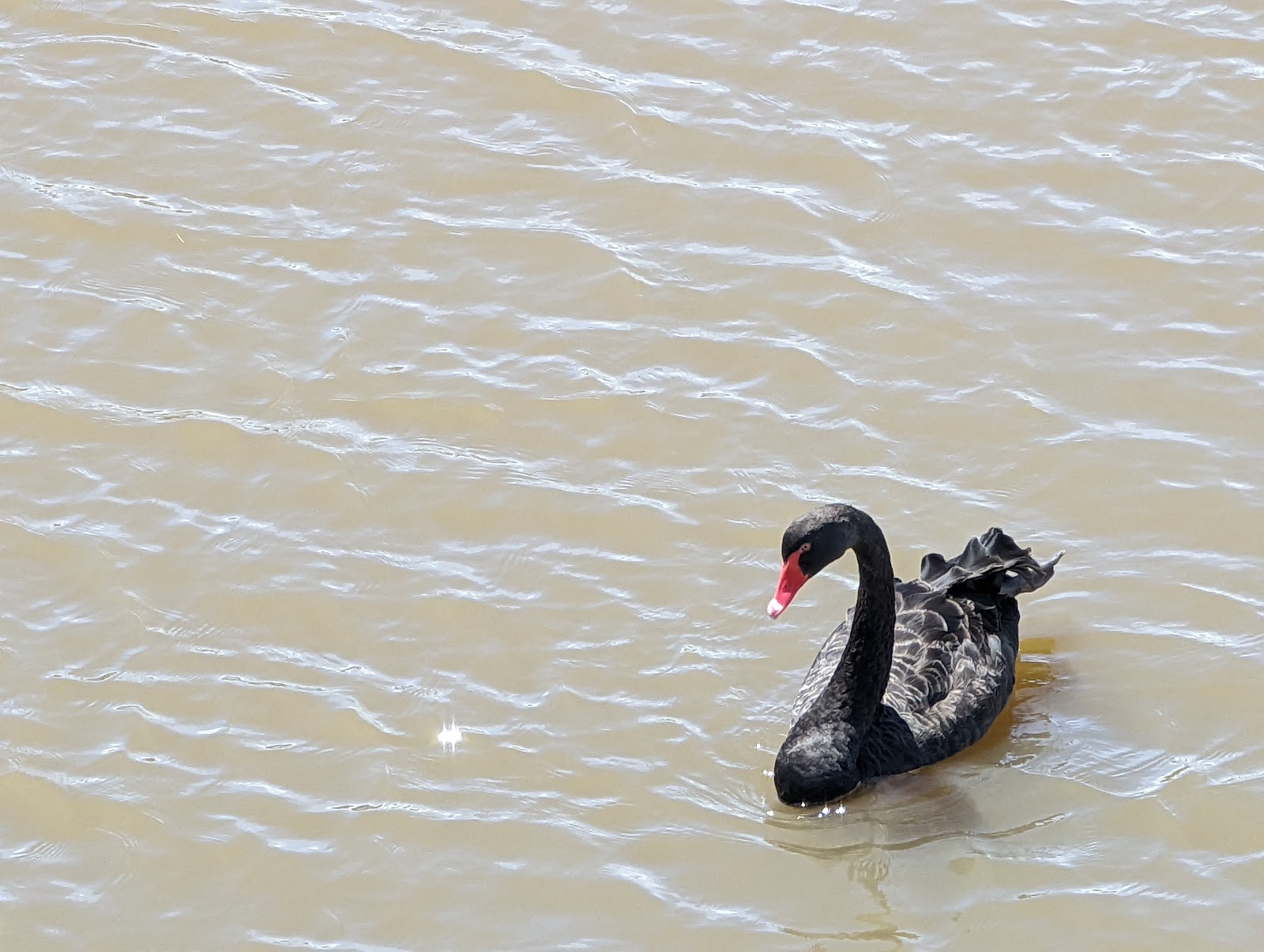 One of the highlights of MONA FOMA was "Thaw", where they suspended a large block of ice from a crane over the gorge and had a performer dancing on it for 8 hours. Clearly this is a message about climate change, but the dancing was more like lying on the ice and occasionally getting up to scream like a crazy person at anyone who made eye contact. It was medium level confronting, and not in the good way. 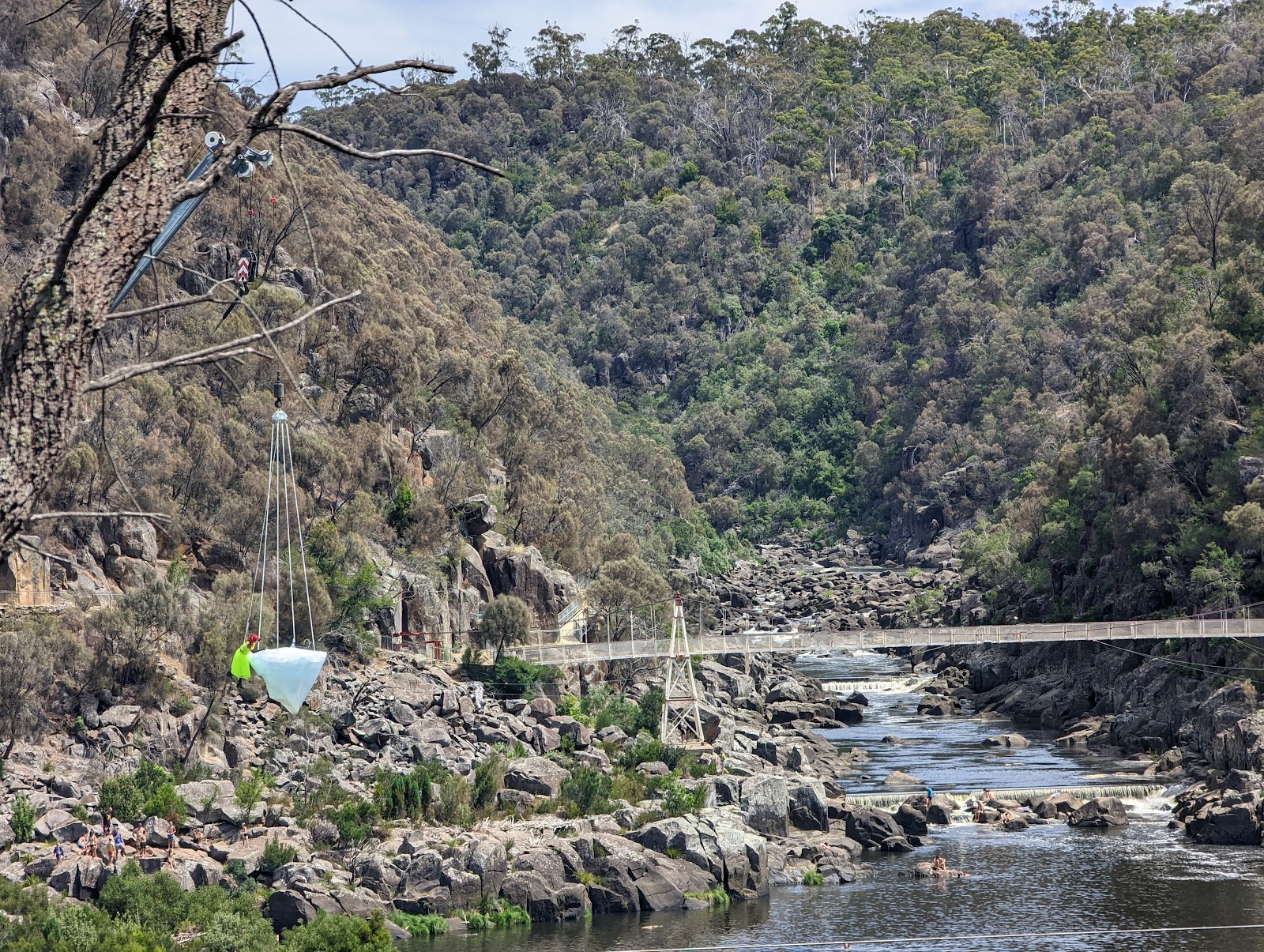 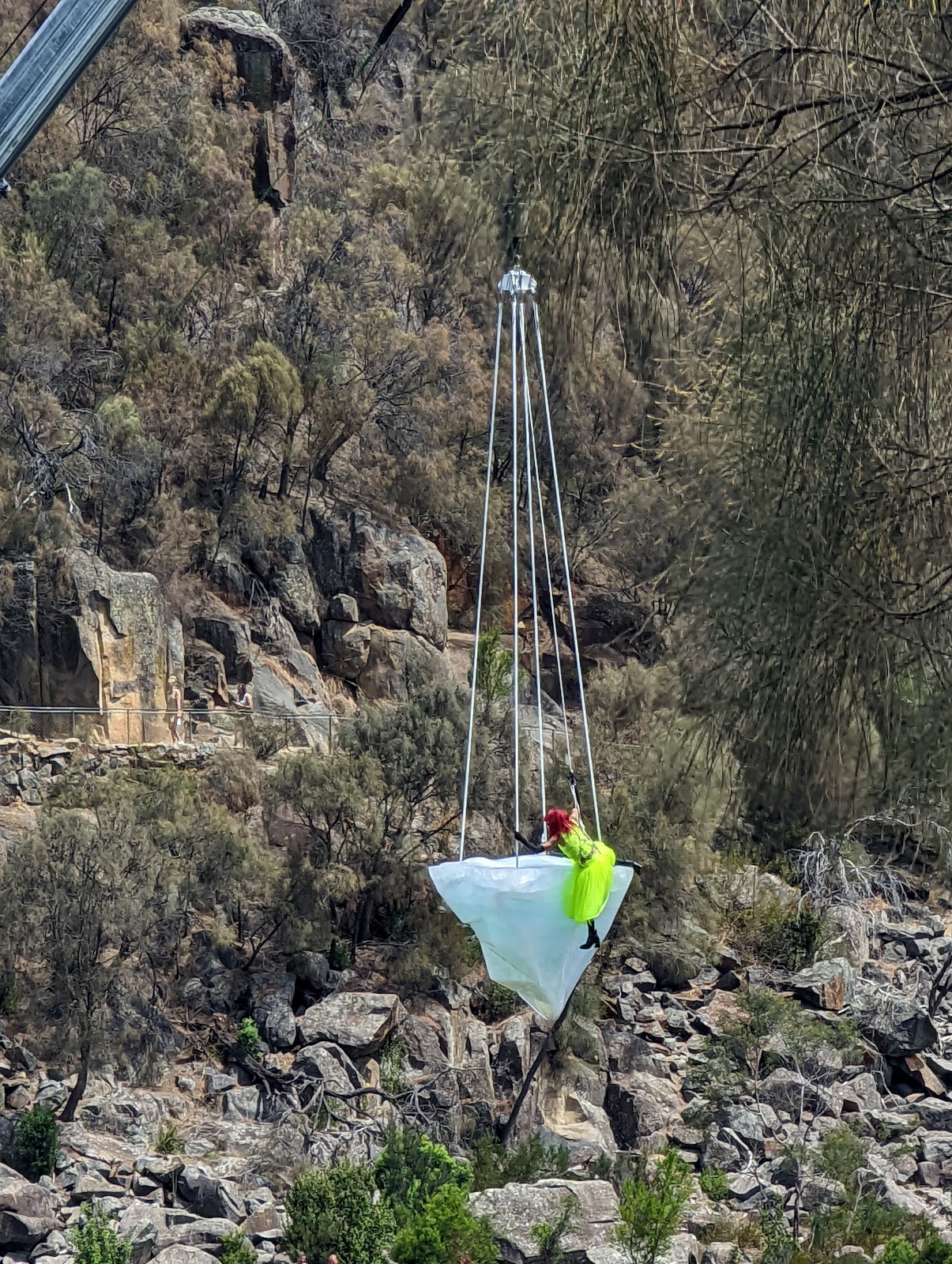 The other highlight was the Midnight Oil concert. Now I'm no devout Midnight Oil fan, but I do like many of their songs (or at least recognised them once they started playing) so it was another great night enjoying live music, except the music was not the highlight. Peter Garratt was. Is he a weird fellow? Yes. Is he entertaining as hell? Also yes. Did he do the Peter Garratt dance? Yes yes and more yes. It was great music and great laughs and a great time had by all... especially Peter.

The trip continues with Canyons & Caves.