Derby to Bay of Fires

The next stop on our Tasmania sequel trip is Derby, the small town turned mountain biking mecca in Tasmania's north east. Our previous trip to Derby, apart from being too short, seemed to be cursed with mechanical issues of all sorts, but this time we came prepared with every spare you can think of.

On our way to Derby, we stopped in Deloraine to visit the Red Brick Cidery, which had more types of cider and ginger beer than we could taste (and drive) so we opted for some takeaways. Before getting back in the car we decided it might be nice to stretch our legs and walk around town, following the Deloraine Art Walk. 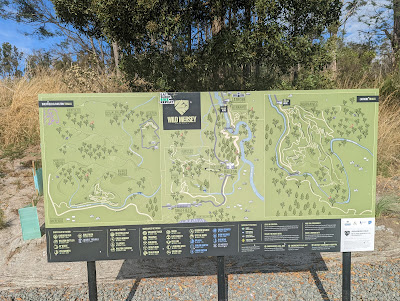 While in the area we also stopped in at the Wild Mersey MTB trails in Latrobe. After climbing up Bee Line and Tramway, we took the Big Bend following around the River before descending back down High Voltage. Nick ended up with the first mechanical of the trip, nothing more than a slightly flat tyre, but it was a short and fun side trip, leaving us keen for what Derby had in store. 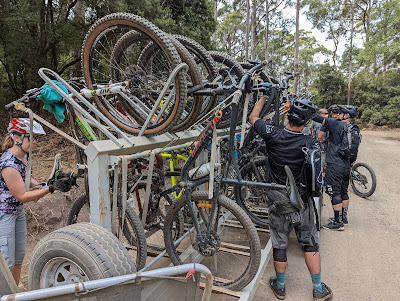 Once in Derby, and with Nick's tyre repaired, we started the day with a warm up lap around Axehead/Sawtooth and the lake, revisiting our tried and tested favourites from last time, Berms and Ferns, and Wotchya Upta. After lunch we took the shuttle bus up to Black Stump, enjoying the epic downhill trails of Flickety Sticks, Howler, Rattler and Deadly Bugga.

Unfortunately before we reached the end of Deadly Bugga, Nick's tyre had gone properly flat as he narrowly escaped a bad stack. So like the good friend that I am, I ditched him and rushed to make the next shuttle bus. (To be fair, we did try to fix it first, and I left him with my spare tube and pump, but it makes a better story this way!)

Once again from the top of Black Stump, Naomi and I (no Nick) decided to take Return to Sender back down the mountain to make it in time for the final shuttle of the day...or so we thought. It turns out the track was a little more technical than I remembered (possibly a bit more washed away) and Naomi had an intimate moment with a rock...or three. While trying to push the envelope, she managed to send it off one rock, sticking her front wheel into a slight ditch hitting a different rock, which caused her to go over the handlebars and stamp her face into the side of another rock. Thankfully she escaped with only a few bruises and a broken pair of sunglasses, and we (somehow) managed to get back down in time for the last shuttle, though we were an awful lot closer to the cut-off time that we had planned to be!

Meanwhile, Nick has been doing laps of Derby between bike shops and our accommodation to find parts, tools, and time to repair his tyre. With all systems go the 3 of us embark on the last run from Black Stump, taking Snig Track into the infamous Kings Wall where 3 out of 3 riders ended up with only 1 working brake last time. Thankfully this time we all end up completing the run as we ride into the sunset and back to our accommodation for some hard earned beers and a good night's sleep.

The following day we take a different shuttle bus up to the Blue Teir trailhead where we take the Blue Teir trail back to the Weldborough Pub for lunch, before continuing down Atlas into Derby. I have no doubt that this would be a fantastic day trip, but unfortunately today the weather was not in our favour. Shortly after taking the Blue Teir turn off towards "The Pub", it turned from overcast to medium level rain and I learnt something I didn't know before today: My rain jacket is no longer waterproof. 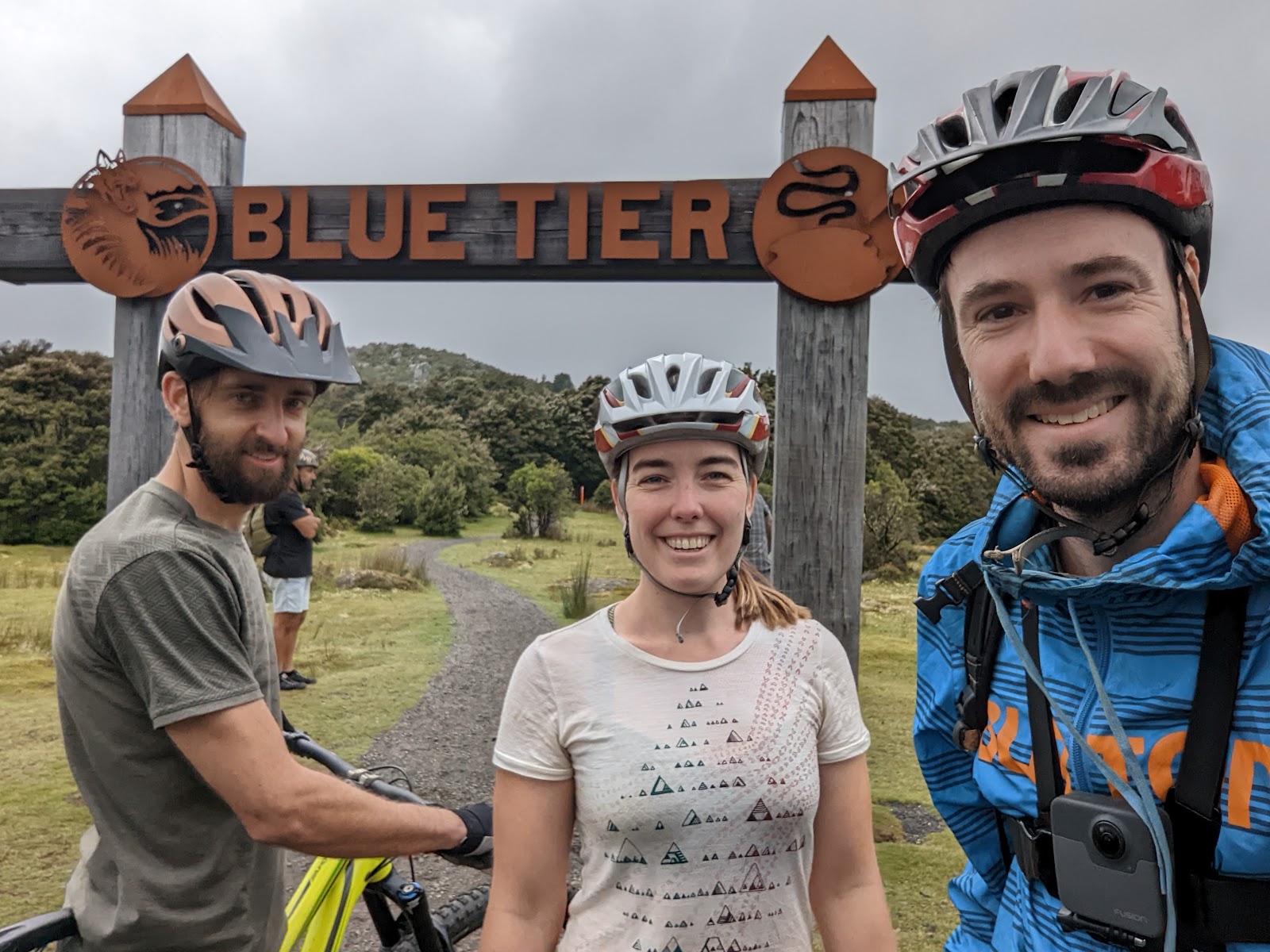 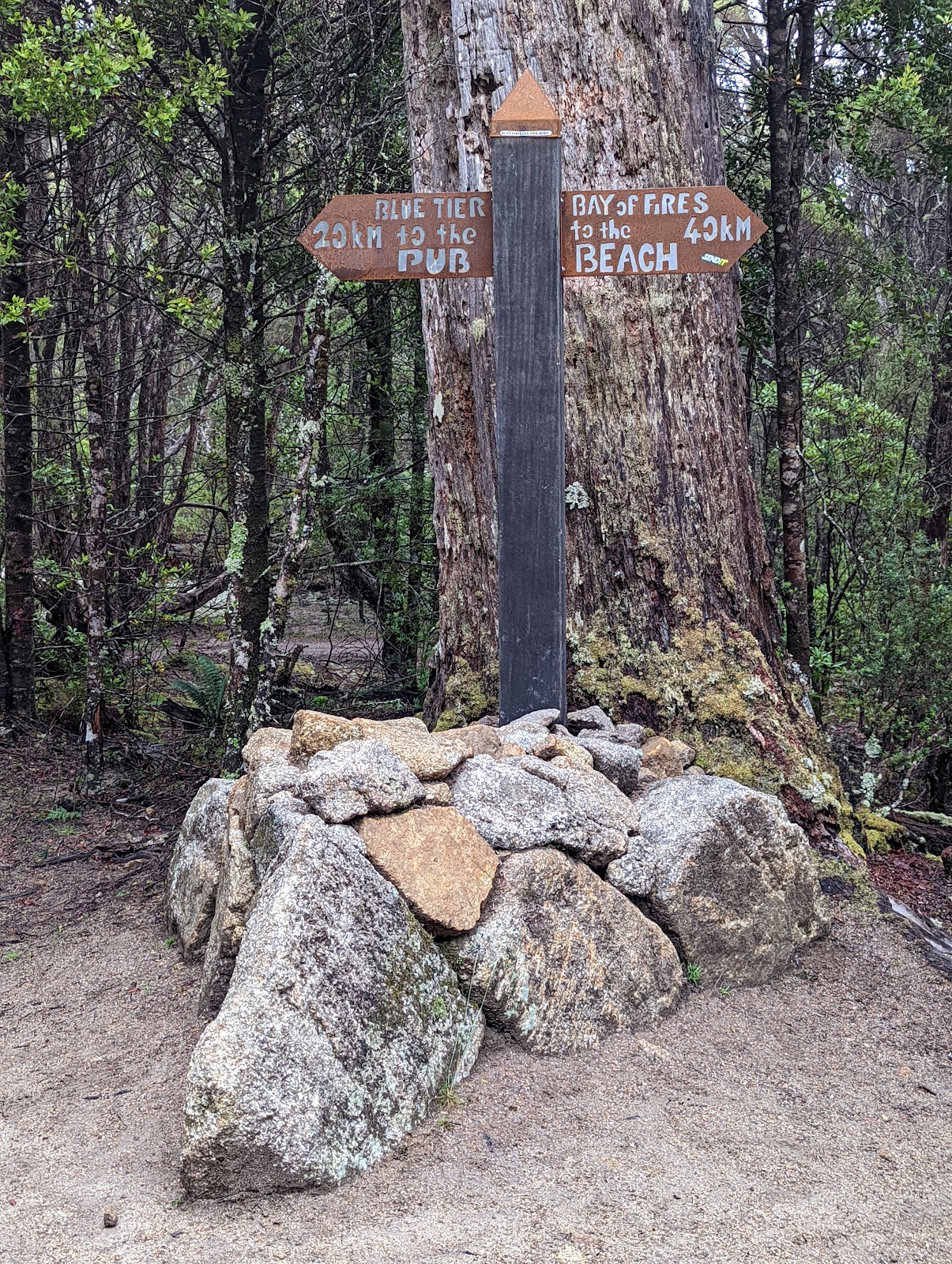 By the time we reach the pub, we are all wet but I'm soaked through, and despite staying for a longer than usual lunch I fail to get warm again and decide to skip the second half. Thankfully I had done the Atlas trail last time, so I still had a good day knowing I got to ride the section which I hadn't done before.

The last day in the Derby area was a 43km one way trip from the Blue Teir trailhead to the Bay of Fires on the east coast of Tasmania. In order for our gear (and car) to be waiting at the other end, we have an early start to drive up to Blue Teir, where Naomi drops Nick, Matt (who has now joined us after his extended stay in Launceston) and myself while she drives to the Bay of Fires and gets a shuttle bus back to meet us. Although we had planned to ride the Wellington Circuit while we wait, it quickly became evident that the trail was mostly underwater from the recent rain, so we decide to catch up on some sleep instead- enjoying the sunshine while it lasts. 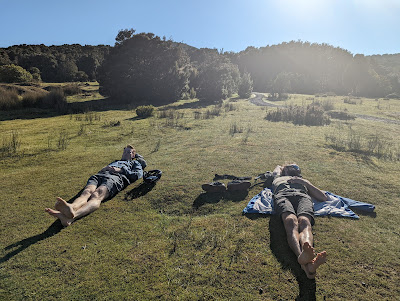 The start of this ride follows the same path as the Blue Teir trail, until we take the turn off for "The Beach" instead of the pub which we took yesterday. Today the sun is out and the view down the valley is spectacular. After managing to leave my sunglasses on a rock, I went back for them and couldn't help but take a panorama now that everyone else had ridden past.

The rest of the ride was a great mix of berms, flow track and the occasional uphill, but was predominantly downhill overall. The weather held out for a while but it did start raining again, thankfully today I knew my rain jacket wouldn't cut it and was wearing an extra layer so I might have been wet but at least I wasn't cold. When the storm reached us we took brief shelter behind a rock before continuing our way down to the beach.

All in all, a fantastic but tiring few days- exactly what we've come to expect from the Derby region of Tasmania.