Fresh from our escape out of Launceston, we've hired a car and driven to Cradle Mountain National Park ready to go canyoning at Dove Canyon. This canyon is frequented by tour groups, but given we'd rather do it at our own pace (and not pay $300 each) we just hire the gear from the tour company and do it ourselves. 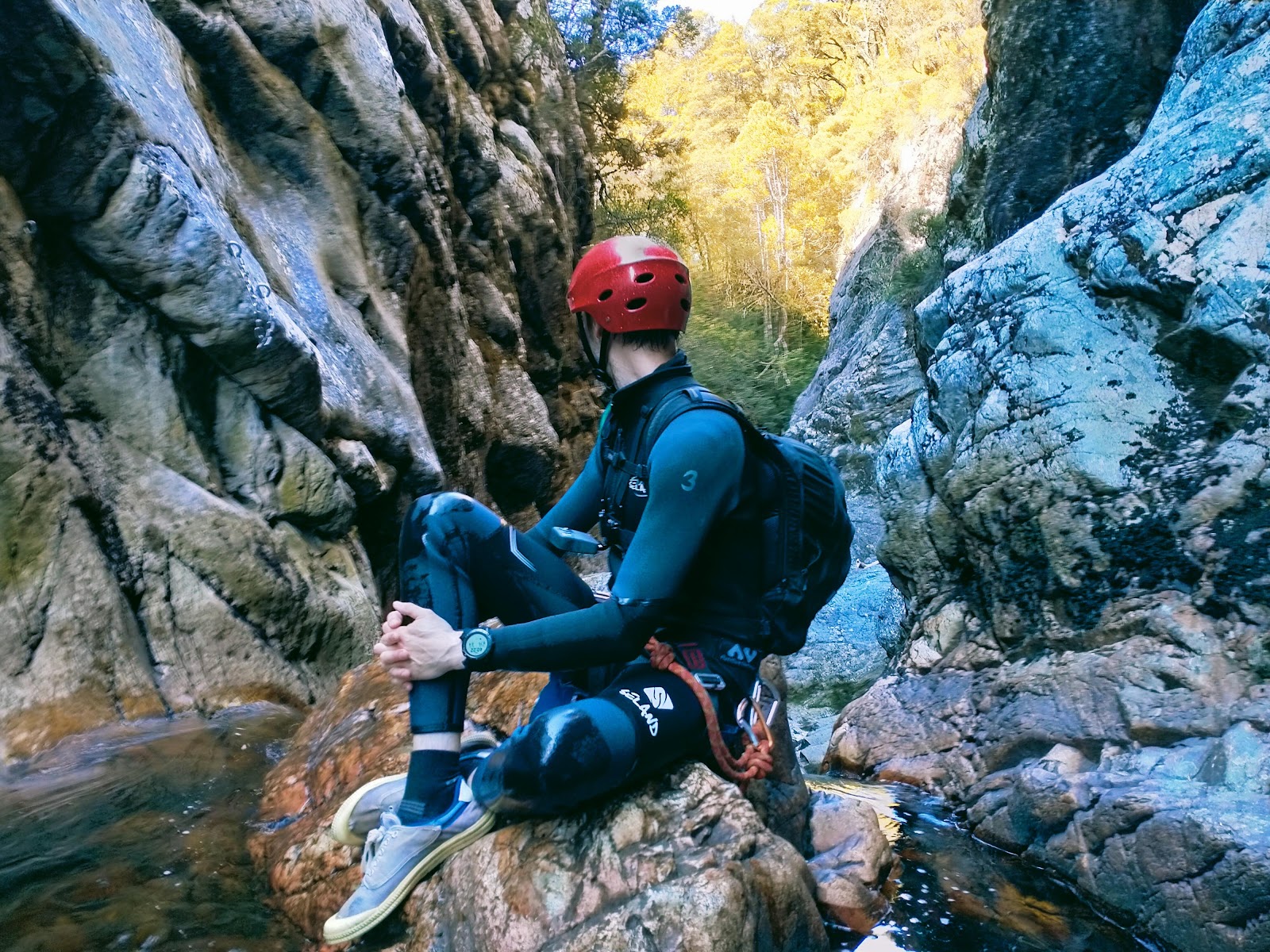 The walk in to the canyon gives us all a strong hit of nostalgia, and maybe even a little de ja vu, from hiking the Overland track 3 years ago. It's only a short 2.5km walk in to the canyon, and 3.5km walk out, with lots of fun slides and jumps, so it's a short but action packed afternoon. 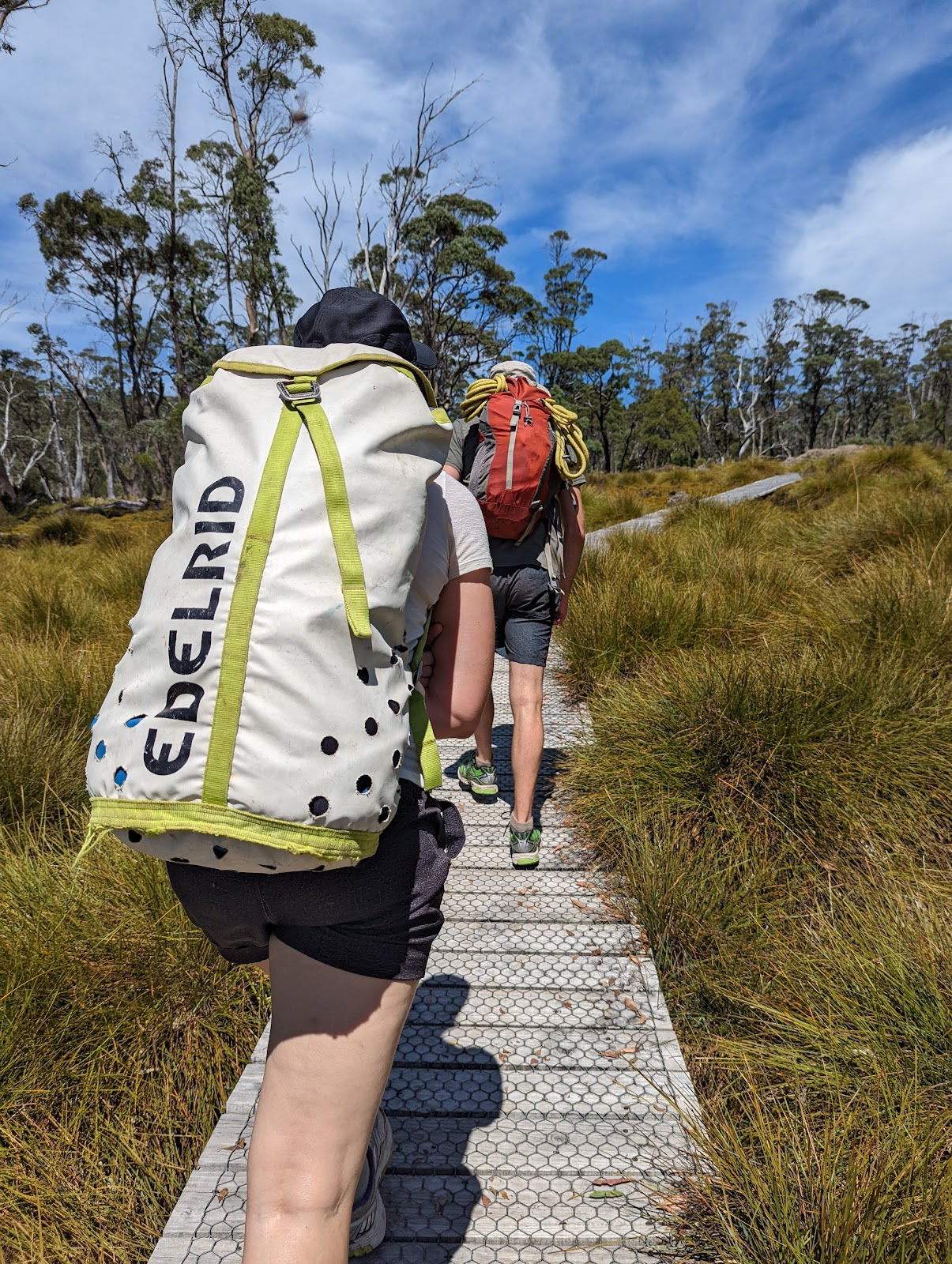 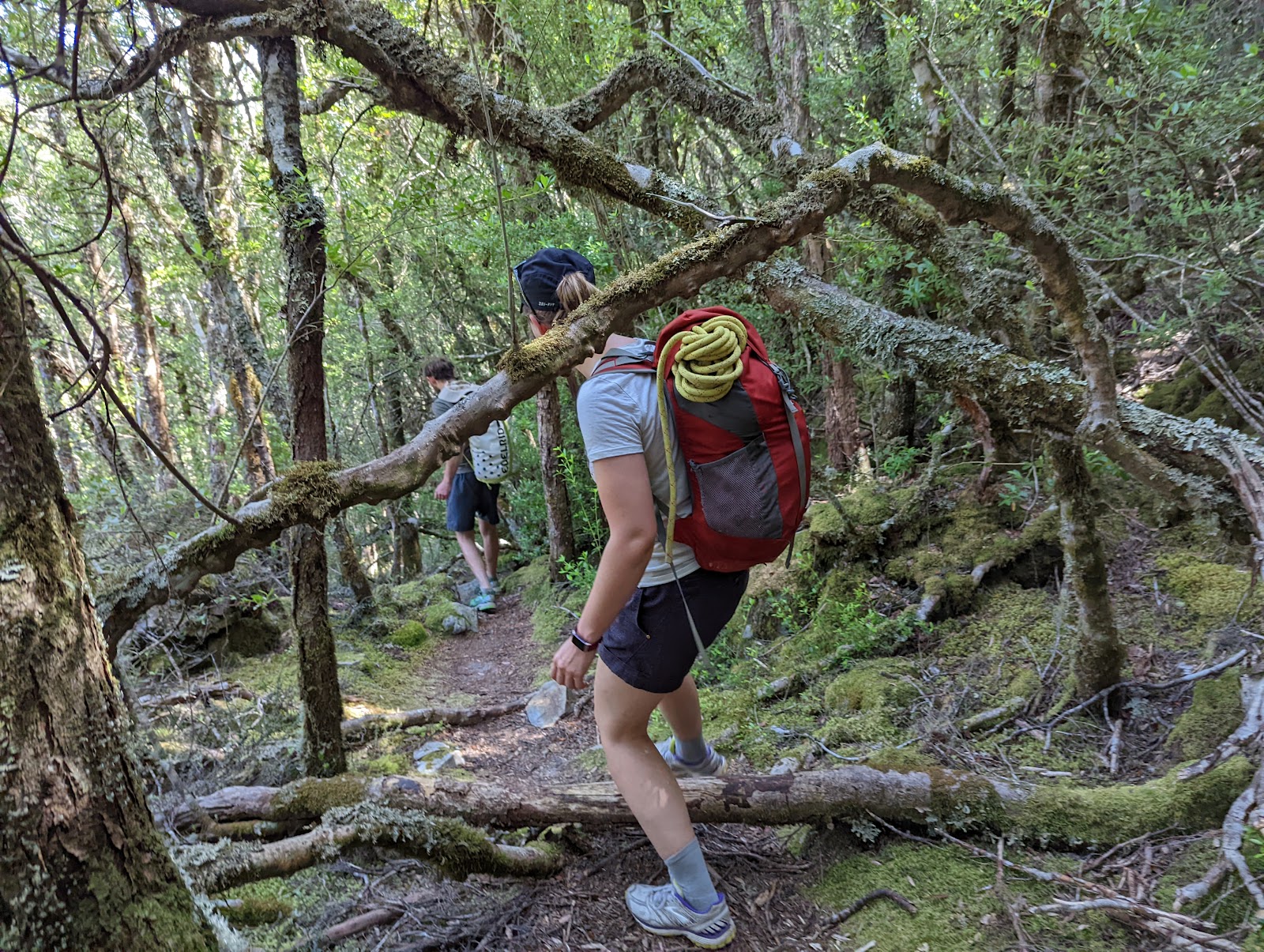 The track notes and discussion with the tour operators gave us plenty of information, in particular about a feature called the tea pot, which is described as being "easily recognisable due to its rounded amphitheatre shape". This feature was important to find as the next obstacle is the last and marks the end of the canyon, but the only problem was that it was so easily recognisable that we recognised it 3 or maybe 4 times throughout the canyon, each time thinking "oh this must be the tea pot"... We did eventually correctly identify it, and found the exit track. As for all the other features, I think the 360 video speaks for itself.

After drying off from the canyon, we stay overnight at the Wandering Trout in Mole Creek, a small hotel run in conjunction with the local Wandering Trout brewery. We booked this place out of convenience, and the possibility of trying a few new beers, but it turned out to be genuinely lovely and the owner extremely accommodating, going out of their way to help us store our bikes during our 2 days in the area. Would highly recommend for the service, the food, and of course the beers if you're ever near Mole Creek! 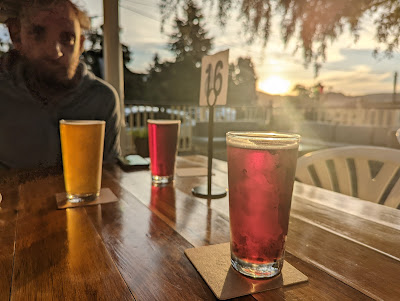 The next morning we head a few minutes out of town to Mole Creek Karst National Park, where Wet Cave and Honeycomb Cave are well known as easily accessible caves in the area. While in Launceston, Nick did some research at the library to get some cave maps, but could only find Wet Cave, and not a single reference to Honeycomb Cave except as a POI on Google Maps. Once we get to the carpark, we find an open cavern to the right which doesn't go anywhere and a path leading upstream to the Wet Cave entrance. This leads us to assume that either Honeycomb Cave is just that cavern near the carpark, or that Honeycomb and Wet Cave are in fact the same cave. 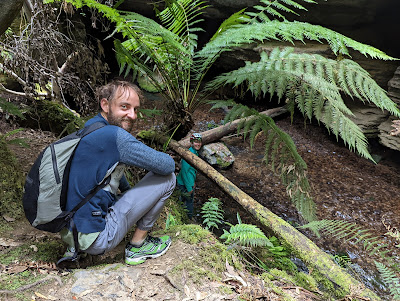 Once we're sure of the entrance, we don our gear only to find out that one of our 3 headtorches isn't working, so from here on Naomi is stuck being between Nick and I to rely on our light. We also all have phones though, so worst case that's a backup torch each. 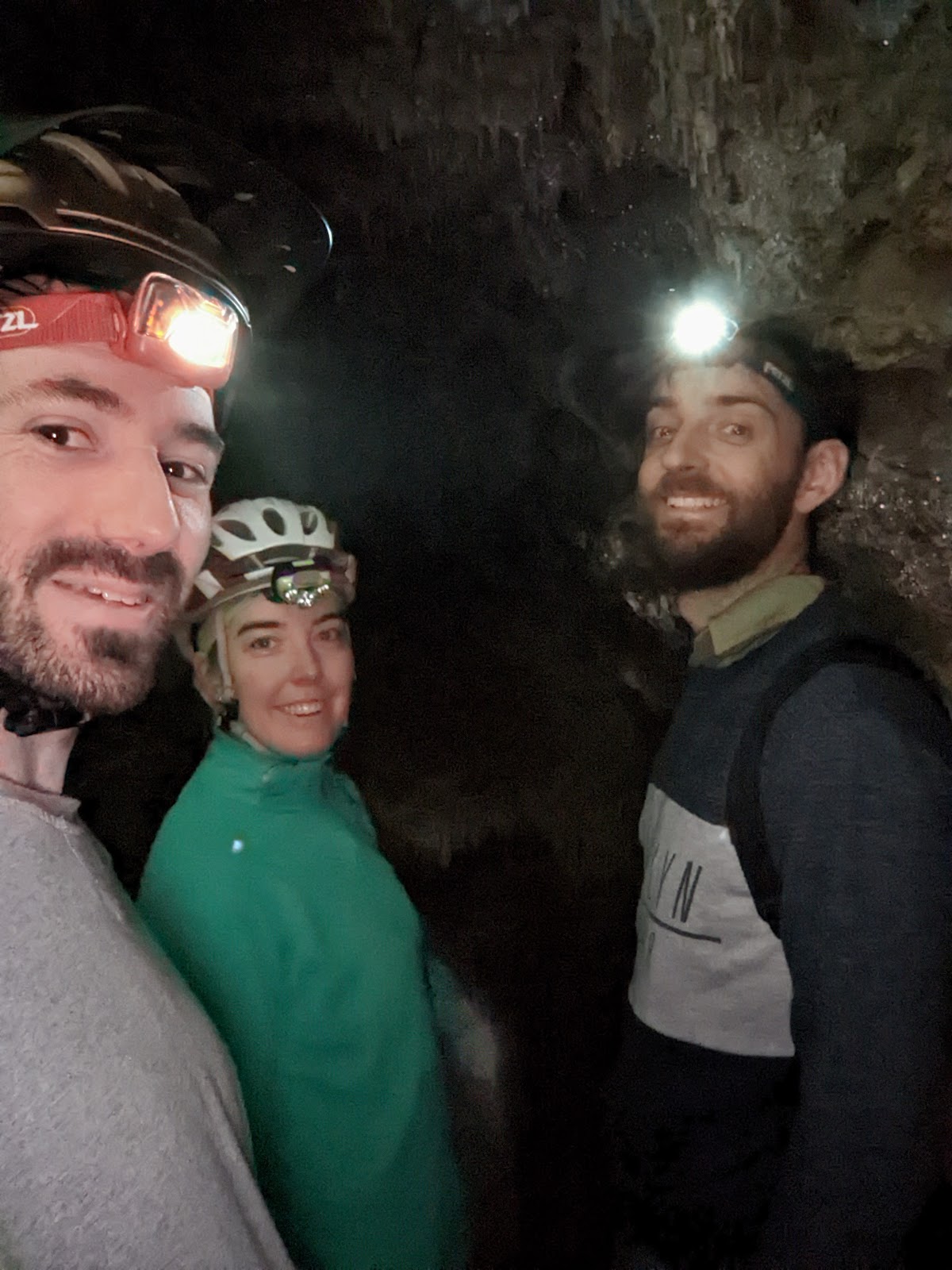 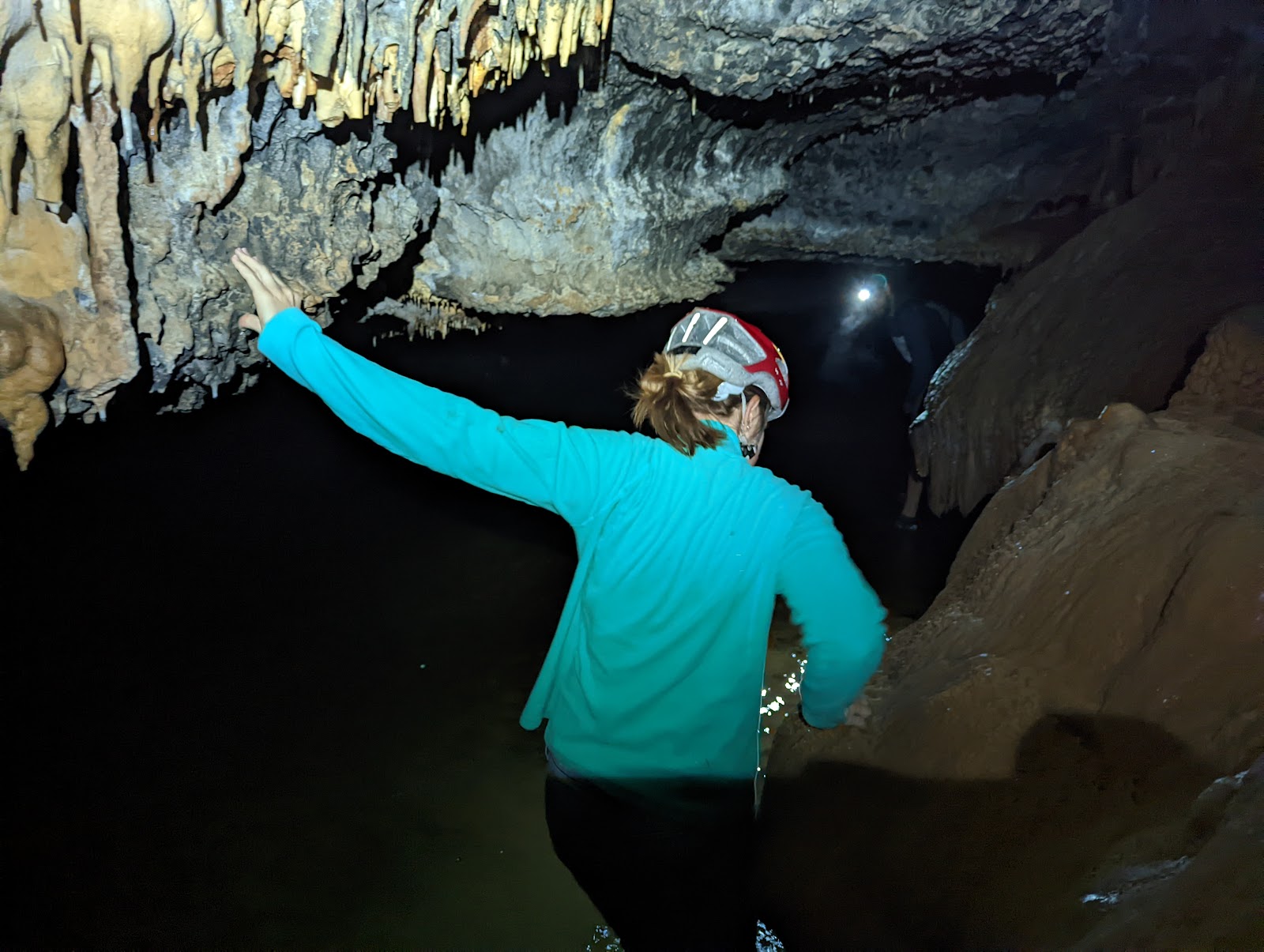 The cave follows mole creek upstream, with only minimal wading required- usually below knee deep (assuming you step in the right places). The water was cold but not hard to deal with for short periods. The map Nick found was easy to follow and with a few side entrances and obvious bends in the river we were able to keep track of exactly where we were pretty much the entire time. 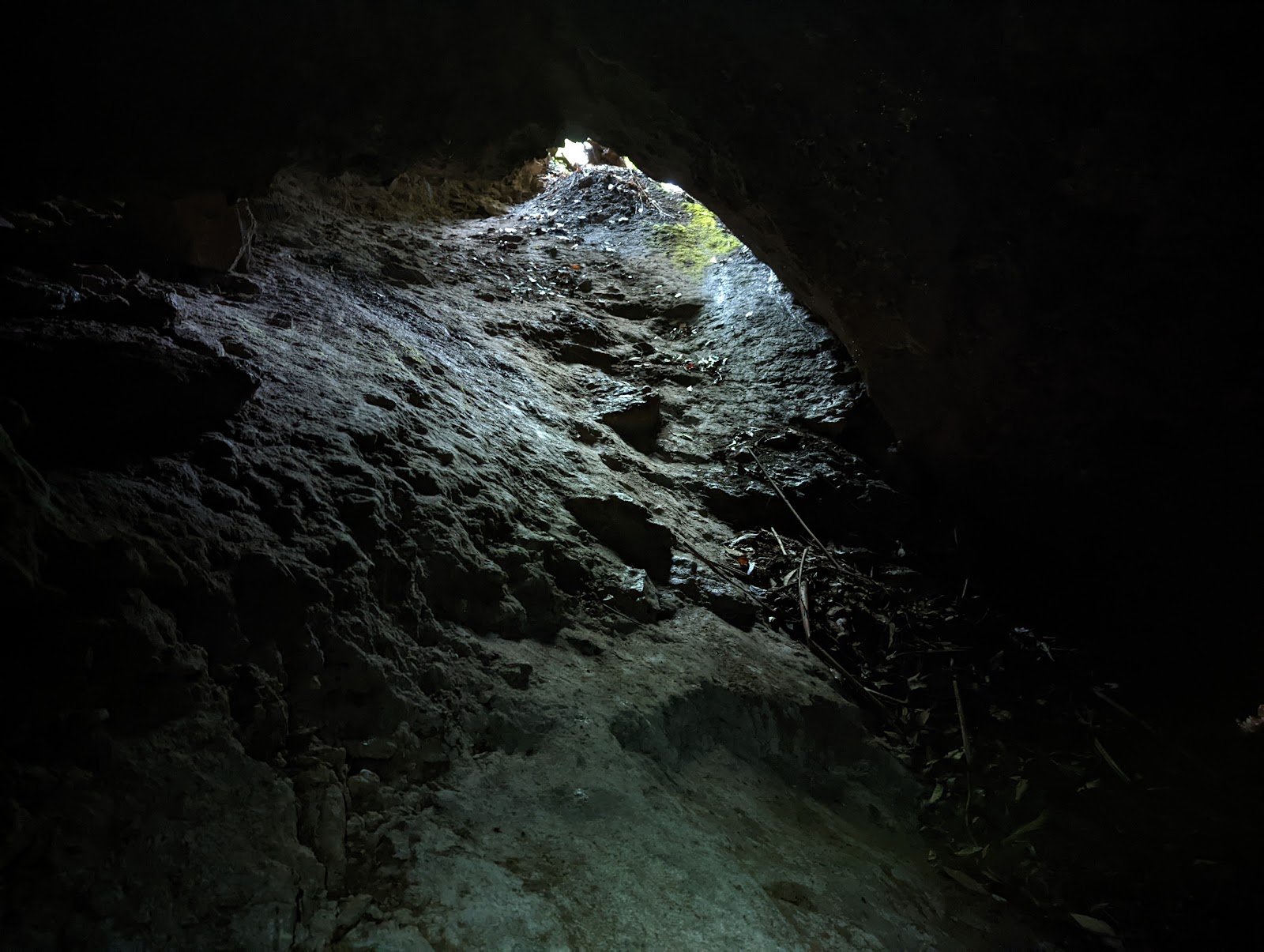 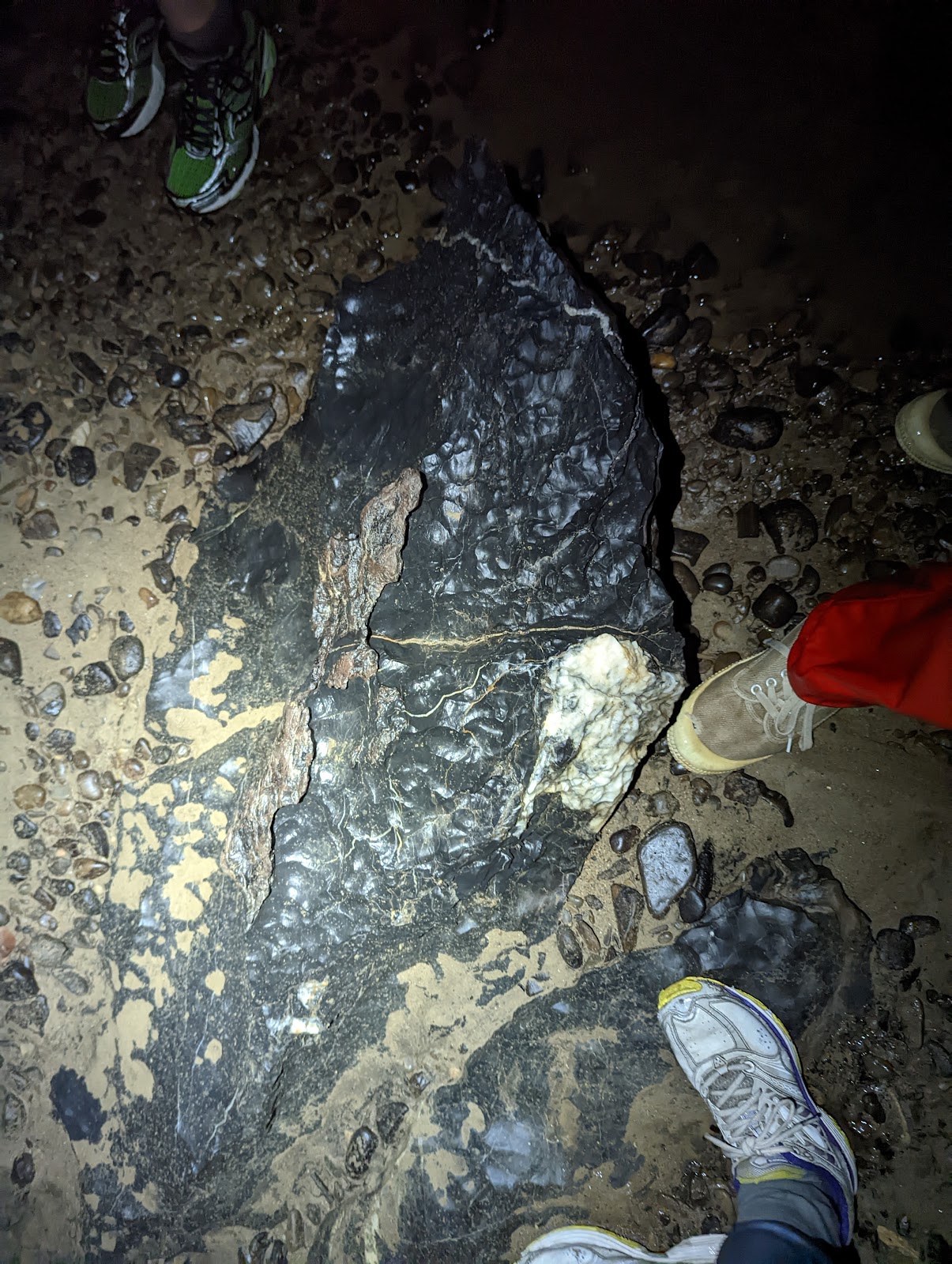 We explored some side tunnels along the way, which were easy to navigate. Only one attempted side path got too narrow for our liking, though we did explore it from both sides and it appeared to have been quite achievable if we had to. 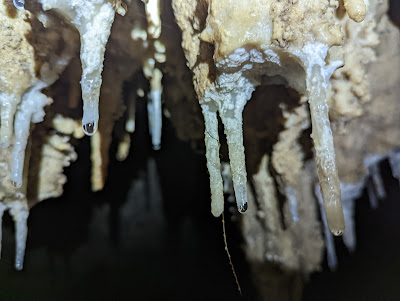 There were some interesting stalactite formations towards the end, such as "The Root" pictured below. 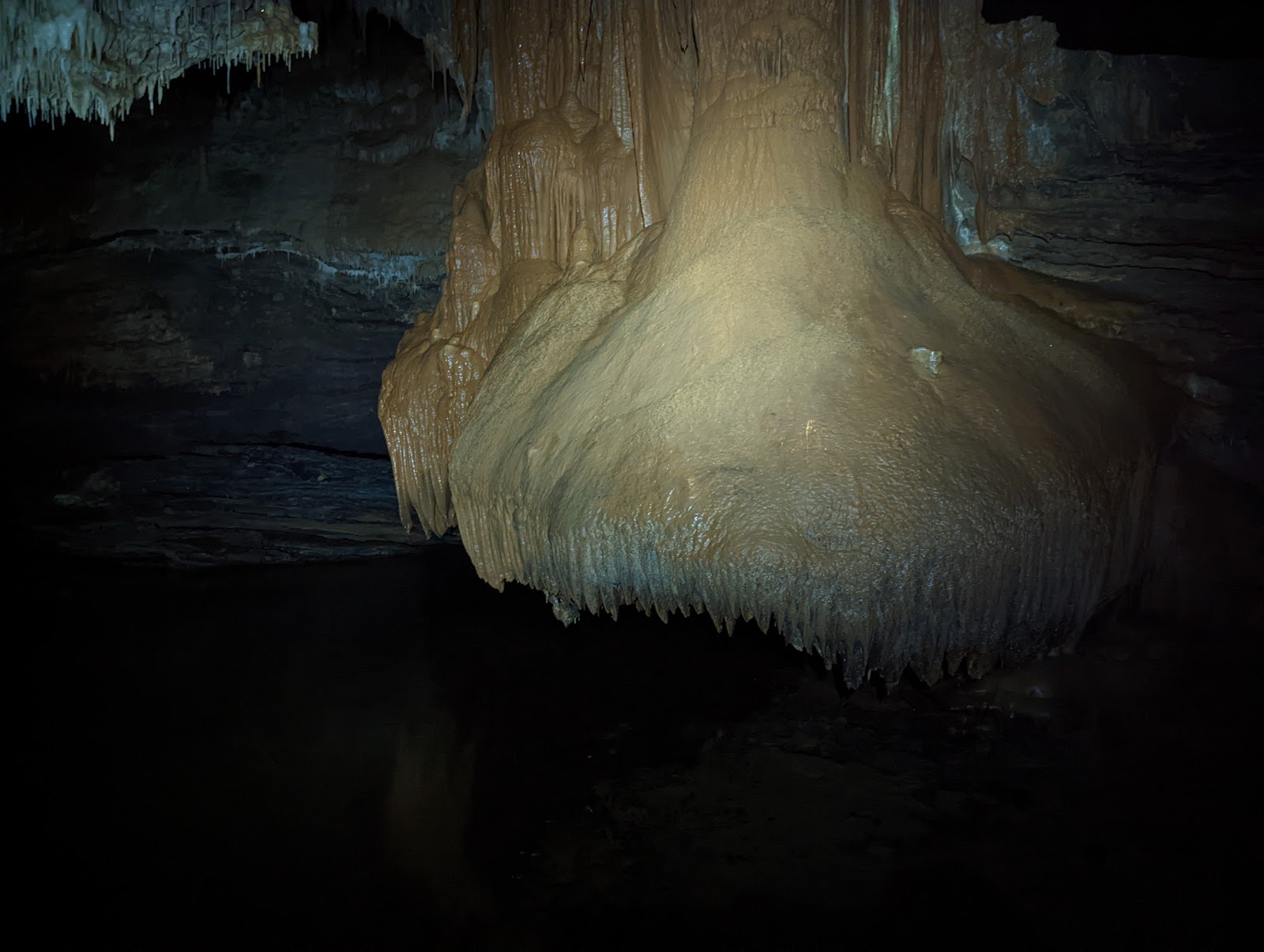 We estimate we got about 290m into the cave, after finding the first and second rockfalls marked on the map. At this point we could see the water continued further and got much deeper, with a lower ceiling, so we assume this is the upstream sump which marks the end of the cave. 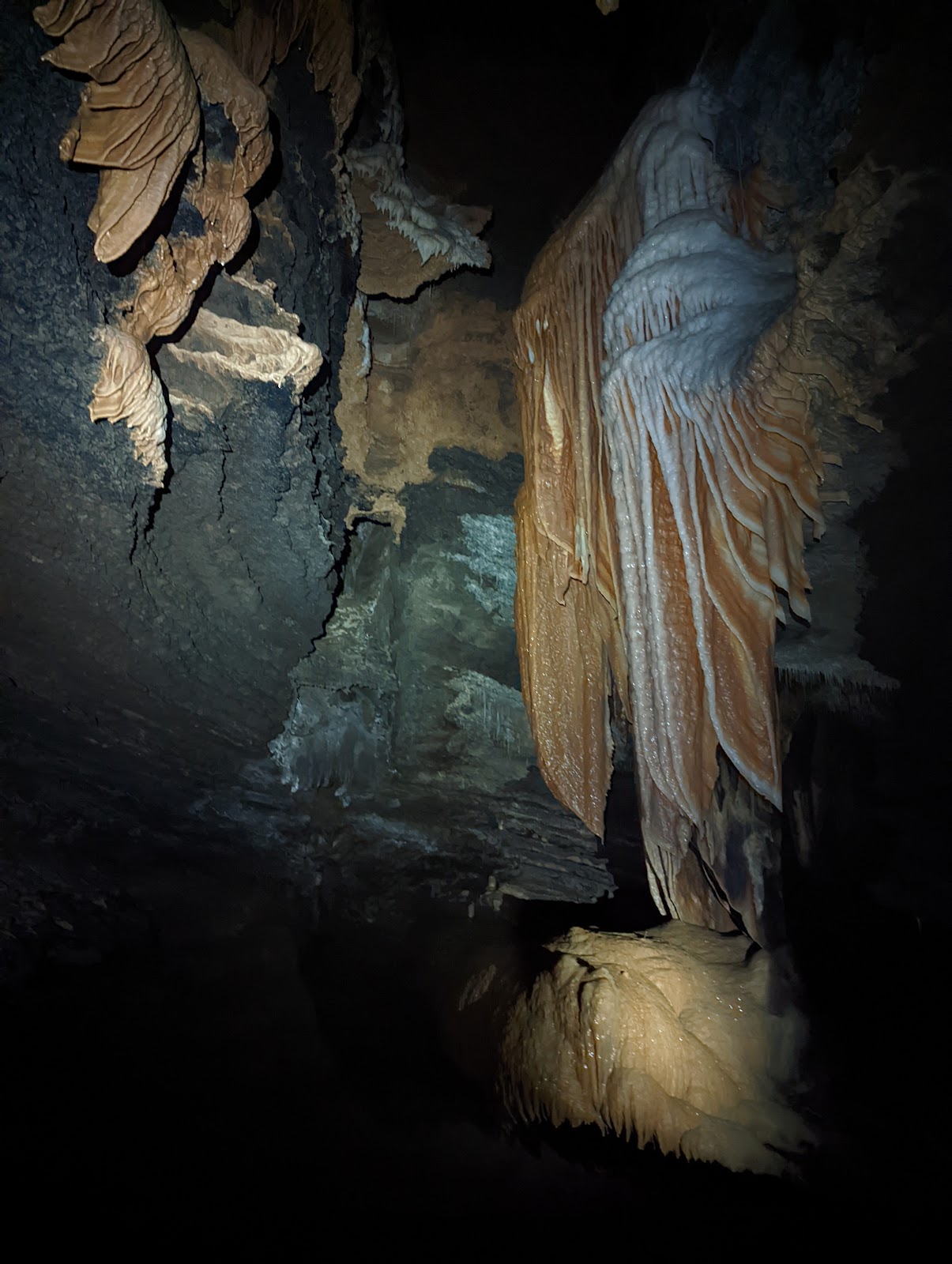 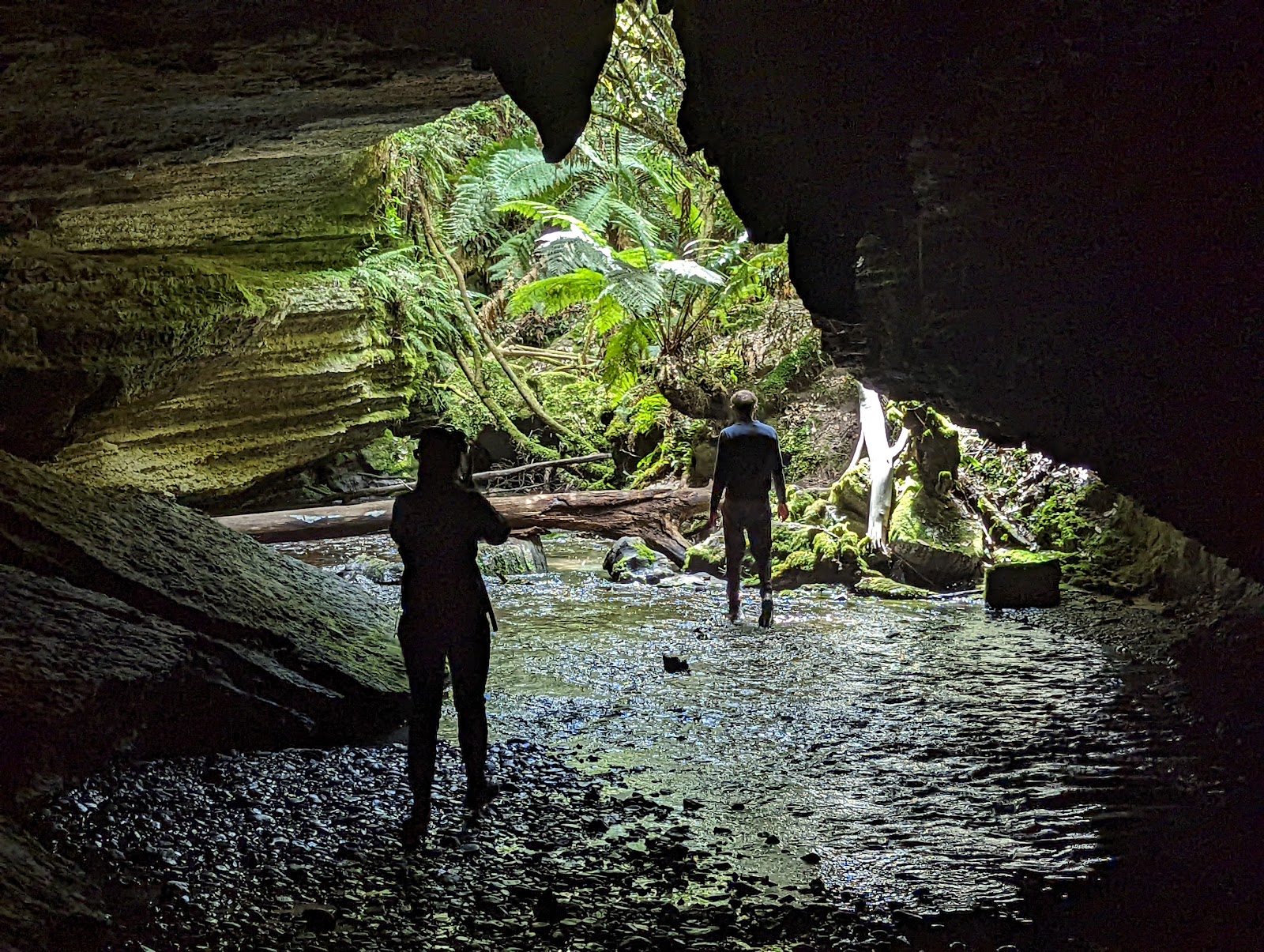 All in all a nice easy beginner cave with no abseils required, so a good one to do when you've travelled by plane and wouldn't have wanted to bring all the heavier gear with you!