October 04, 2018
This morning’s early start is bittersweet. On one hand I am leaving bellissimo Italia, but on the other hand this afternoon will bring the second major adventure day of the trip, Paragliding in Austria!

We drive for what feels like an eternity, but once we hit Tyrol-Austria it’s GO GO GO. There is a small group of us who desperately wanted to fit in both Paragliding and Canyoning, so we get dropped first at a car park where we get straight into a black SUV bound for the paragliding base. From there we squeeze 8 people and 4 parachutes into a 7 seater and drive up the mountain road. We’re already running late because of the traffic, and these guys drive this road every day, so we go pretty fast. Lets just say it’s a good thing the van is packed so full that we can’t move very far.

We get to the top, at 1600m elevation and prepare to paraglide down to the village base at 600m, so with 1000m of descent we should get about 10 minutes in the air. Obviously this is a tandem glide, and my instructor from the Mountain High Adventure Center is great value. He lets me swap his GoPro for my 360 GoPro and tethers it to us and we are off. Words cannot describe this experience. Once you run a few steps and the wind picks you up it feels so free. You are literally flying, not falling, and the view is spectacular in every direction. Austria has some beautiful mountains and although they are not yet snow covered, the location is stunning. I would not trade this feeling for anything in the world. For 10 minutes I have literally no cares in the world. I am free.

While still on the adrenaline rush from paragliding, we are ushered into a taxi heading straight to the canyoning base. Here we get into some thick wetsuits and jump in yet another van. We drive to the first location which is a small waterfall with rocks we can jump off, this is our training ground. After teaching us a couple of safety things and the correct technique for jumping off 9m high rocks, we move to the real canyon just out of town. The walk in is short but steep so by the time we get in the water for the first abseil, the freezing temperature is almost nice… almost.

I’ve done canyoning before, and have a lot of abseil experience, so I’ll admit I was slightly disappointed to find that the “abseil” is actually them lowering you down on a rope rather than you abseiling yourself, but oh well. The canyoning was a lot of fun anyway, and the gorge we were in was great with continuous jumps, abseils, slides and clambering around rock walls, all with very little walking between them. What a great way to finish the afternoon! 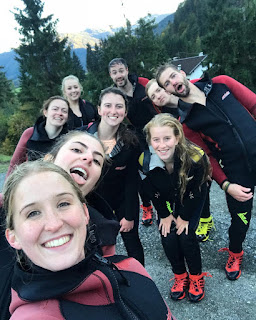 So with the adventure part of Austria complete, we stay in a beautiful little cottage bed and breakfast with some real Austrians and real Austrian cuisine. We drink a local beer (at 3euro for 0.5L) and have an organised games night. I end up in a team with 4 girls, so we settle on a team name which I can’t publish here. The censored version is “Four {Female Anatomy}’s and a {Male Anatomy}”. It’s all a bit of fun, including trivia about our tour guides, team challenges and music identification, but lets just say that a lot of people got moderately competitive… especially me… and the rest of my team…

For the last challenge we were given a set of numbers from 1 to 9 which we had to place in a triangle so that all sides add to the same number. Three of our team saw numbers and went “maths? no thanks, I’m out”, so it was down to 2 of us. My other team member used her phone as a calculator and assisted with the arithmetic ability which I misplaced about 3 beers ago. Thankfully competitive-Dave woke up logic-Dave and he figured it out, bringing team “4{F}’s and a {M}” to victory! Good times.
Canyoning Paragliding Trip:Europe2018
Location: Tyrol, Austria