Although today hits us early (but not so bright) with a 6.30am start, it is bound to be worth it as we drive the Icefields Parkway between Jasper and Banff. For the next 280km we get to take in the natural beauty of two of Alberta's best national parks, stopping at many lakes and lookouts, including Lake Louise where we take *that* selfie. 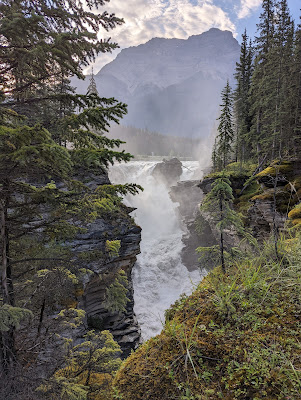 Our first stop is at Athabasca Falls, which are running at full force and once again remind us the raw power of these glacier-fed rivers. At this point it is still quite early in the morning, so we are lucky enough to have the sunrise add to the ambience of this beautiful spot. 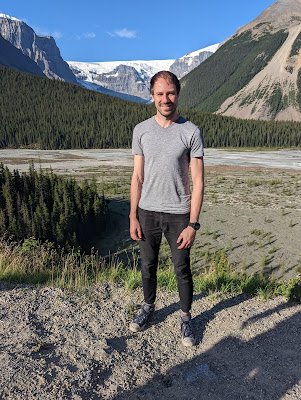 The next stop looks out over Stutfield Glacier as we climb up into the ice-filled mountains. Its a strange feeling to see mountain peaks still covered in snow and ice despite it being the middle of summer, because thats just not something I have at home in Australia, but here it is common as we pass the many glaciers fed by the Columbia Icefield. 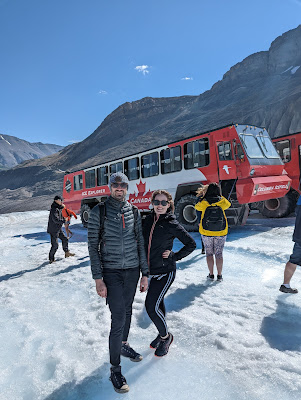 Further up the road we trade the Contiki bus for a different kind of bus called the Ice Explorer, which takes us onto the Athabasca Glacier. The Ice Explorer is a custom built 6 wheel drive truck worth over a million dollars each. Even a single new tyre is in the order of $6000, but to be fair these things are massive. When presented with the opportunity of these tyres I couldn't help but climb on them... to show you the scale of course, purely for science. (and because nobody had a banana) 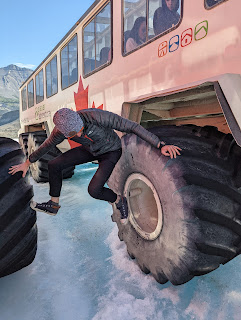 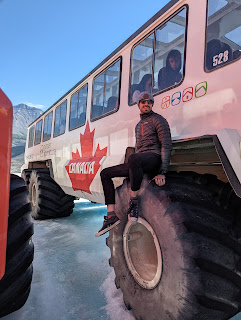 For most people in my group this was their first time standing on a glacier, in fact for one of my fellow Aussie's this was even her first time seeing snow! I've been on a glacier at least once before, in New Zealand when I was much younger, but the experience was still incredible and definitely gives you a better sense of scale than from seeing it in the distance from a lookout. 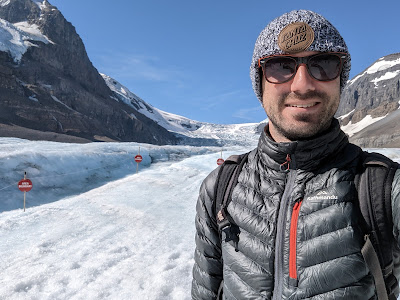 From here it's onto a slightly less frozen body of water, Lake Peyto. I say less frozen because although it is in fact a lake, the water temperature sits at approximately 3-4 degrees C all year round, except for the top 1m or so which is slightly warmed by the sun. 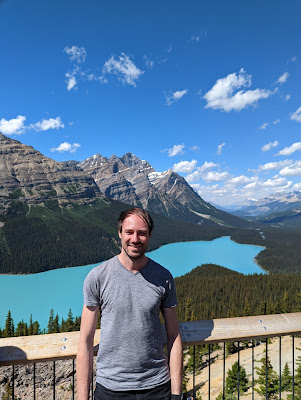 The next lake is the Instagram famous Lake Louise, where I take the obligatory selfie, or 10. Although it is packed with people and the photos are a bit overdone, it is truly a spectacular place and well worth the short walk around the edge to get a slightly more unique photo and avoid most of the crowds. 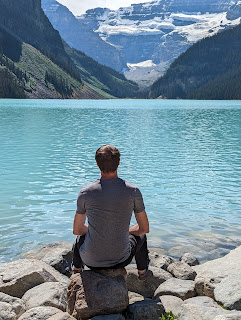 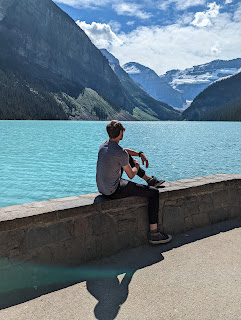 Just around the corner is Moraine Lake, which I actually found to be much more interesting than the much more famous Lake Louise. This fits in with my theory that for every world famous location or thing, there is an equally good if not better similar thing nearby, which often ends up being much more interesting simply because it hasn't been done/photographed a billion times. 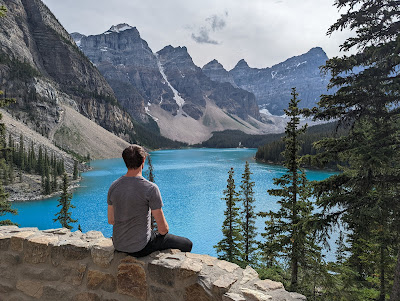 After a short walk to the lookout, I find a well placed rock to stand on to get the best view, but after taking a few photos I quickly notice the rock itself would be perfect to do some bouldering on. Its a good chance to find my climbing feet before catching up with Doug next week, though I will admit my converse shoes were not quite the best for this, especially when my real climbing shoes are ironically only a few hundred meters away on the bus.

After a truly epic day we arrive in Banff and do a quick grocery shop to prepare for a group BBQ back at our hotel halfway up Tunnel Mountain. Most of my meals in Jasper ended up being off with my little Contiki Fam, so it was nice to eat together as one big crew and get to relax and chat for a chill night in. 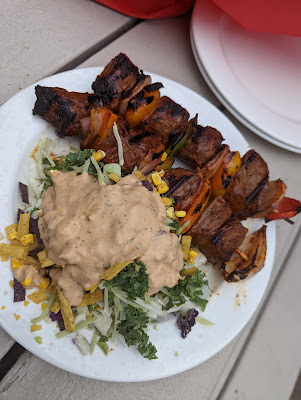 Its here at the BBQ that I get talking to most people about my blog as everyone is keen to see the zipline and rafting videos I've already posted, and Rachel (in her very pommie accent) asked why she hasn't had a shout-out in the blog yet. We've got a lot of characters on this bus, so I'm more than happy to retort back by asking why she hasn't learnt my name yet, as she's been calling me Scuba Steve since day 2 when she learnt that I scuba dive. So here you go Rachel, and Nina, and Aaron, here's your shout-out in the form of a joke: An Englishwoman, an Irishwoman and an Australian walk into a bar... You'd think one of them would have seen it.