So here we are in Banff, a small town nestled between huge mountains in the centre of a national park. In winter, this is a ski town but given that it is currently summer we have just about every other outdoor activity. The town itself is very quaint but not actually that small, with a vibe very much similar to Queenstown in NZ. As a side-note, one of my roommates, Sai, has decided to buy 3 loaves of banana bread planning to eat it for every meal or trade it, so this town will forever be known to us as Banana Banff. 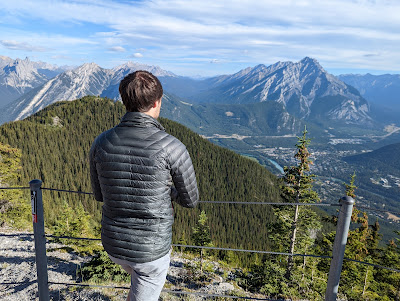 But first thing's first- with all these mountains around, it would be wrong of me not to climb ALLLL the things, so I'm headed up the chairlift on Mt Norquay to climb the Via Ferrata, which roughly translates to "iron road". The Via Ferrata is basically a climbing route with metal pegs installed in the rock as foot and hand holds making it accessible to anyone with a reasonable level of fitness.

There are static lines fixed permanently in place all year round, but this is only climbable in summer as it would otherwise be covered in snow and be part of the Mt Norquay ski resort area. Given the foot holds are solid metal, climbing shoes are not required and instead replaced by just hiking boots, so although this is not a technical climb, it is a hell of a lot of fun. 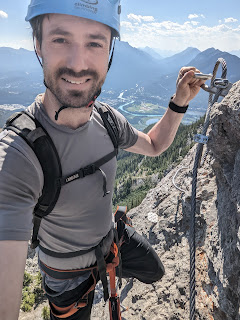 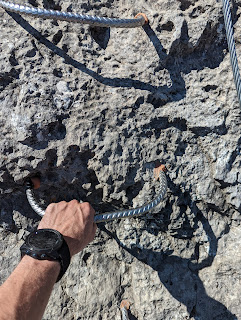 The view along the way is spectacular so as well as the 360 video we take some absolutely amazing photos as we hang out over the edge on top of the world (almost). 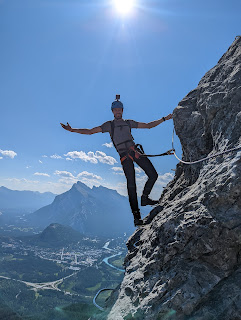 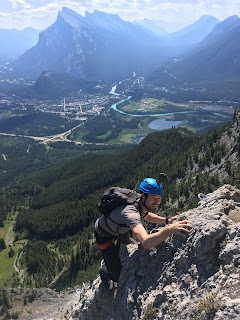 Once we do summit the mountain the scale of these mountains becomes clear and we all just stand in awe for a moment to take it all in. After this moment, we suddenly realise the perfect way to capture this in a photo. Up until now on the trip, Jason has suggested we make a human pyramid on at least 3 occasions in random places, most recently the middle of town, but he hasn't managed to convince us yet. So here we are Jason, here's to you, and even our guide Aaron admits he's never taken *that* group photo up here before. 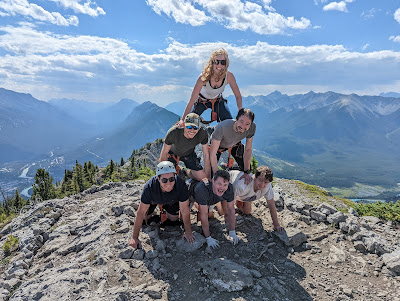 Back down on flat ground we head out to Warner Stables where we take an afternoon horseback ride on the Sundance Trail along the Bow River. Now I've ridden a horse at least a handful of times before but I'm no expert, however as it turns out, Eden is, as she used to ride dressage in another life, so I figure why not put the GoPro on the more experienced rider.

As it turned out, this was actually a great thing as halfway through the ride her horse decided it was about as happy with the slow pace as she was and thought that rearing up and making for a light run might be a bit of fun. You can find this in the video above at about the 25 minute 30 seconds mark. Thanks Eden for being guest videographer on my blog, and for the entertaining commentary along the way! 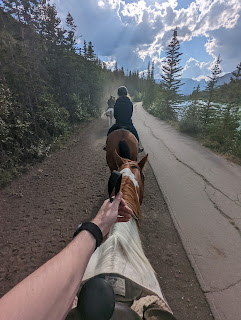 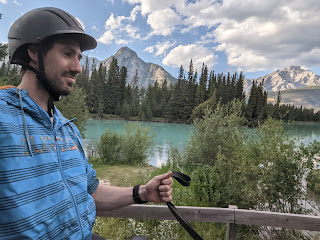 As we finish the ride and have an authentic Albertan steak experience, we all reflect on the various parts of our bodies which are now sore, and head back to the hotel. Tonight is karaoke night at the hostel bar so I quickly shower off today's dusty activities and get straight there. I know from the start this is going to be fun, because a few of us had already been singing on the bus and Eden in particular has an amazing voice (and similarly bad taste in music as yours truly). To help things along, the drinks at this bar are very cheap so after a couple of drinks and a bit of encouragement, we get most of the group to take the stage at one point or another, though I will admit I spent a fair amount of time up there myself.

The highlight of the night though has to go out to our trip leader Alex, who after repeated attempts by me and others to get him on the stage nek-nominated himself and came out of the blue with an incredible rendition of Piano Man, bar stool and all.

Now its at this end of the night where things get a little hazy. I sang my final Disney duet with Eden, made my way back to the hotel room, made myself some toast and put myself to bed... well, almost. I went to sit on the bed to take my shoes off and kind of... missed. Next thing I know I'm sitting on the floor next to the bed and not exactly able to get up. Cheers to Anthony, Sai, Aaron, Lois and Jimmy for the assist. All in all a fantastic night with all my new friends, even if I did have one too many "songs" 😅 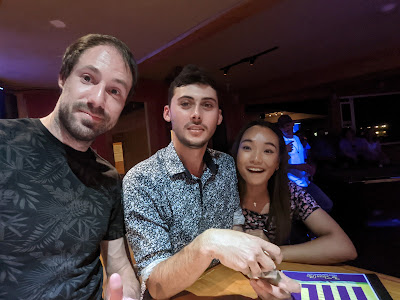