Lets face it, I have no idea how YVR stands for Vancouver, but here I am landing in Canada for part two of my Triple Adventure. After checking into my hostel and taking care of basic life admin like getting a local SIM card, I head out for a few beers at the local Yaletown Brewing Company and enjoy the sights, sounds and smells of downtown Vancouver. 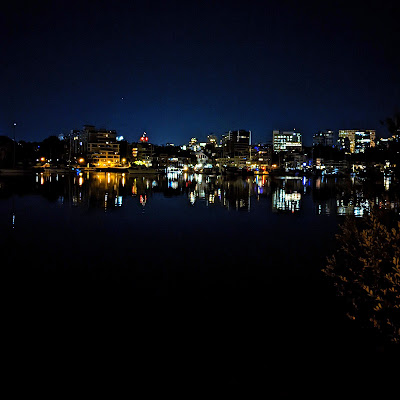 The next morning its onto the Contiki bus where I meet my tour guide Alex and 30 new friends (none of whose name I remember at this point). As we head out of Vancouver city up towards our first stop tonight in Whistler, we pass Squamish where Alex tells us how a rock face here cracked and fell while people were climbing on it. Meanwhile I'm telling my new friend Eden about my Canadian friend Doug who is currently out climbing... in Squamish... 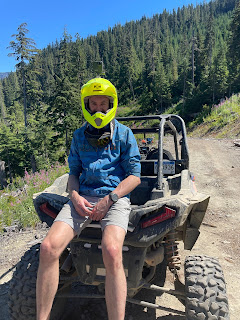 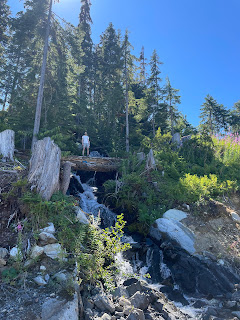 Our first stop in Whistler is at The Adventure Group where we take a tour of the forest in an RZR off-road buggy. I've opted to take the first turn driving and although we're not allowed to take them all that fast, it is certainly an interesting way to see the forest and enjoy the beauty of the mountains. Despite being initially insistent that she wasn't driving, I eventually convince Eden to have a go and after a little bit of off-road driving coaching she absolutely nails it. Needless to say she took this opportunity to get payback for every mud puddle I hit on her side while I was driving 💦

Back in Whistler we check into the Pangea Pod Hotel, which I can only describe as the most upmarket hostel you've ever stayed in, then its out to dinner and drinks to get to know those 30 randoms a little better as we discuss where we've been and what we're planning to do with our full day in Whistler tomorrow. 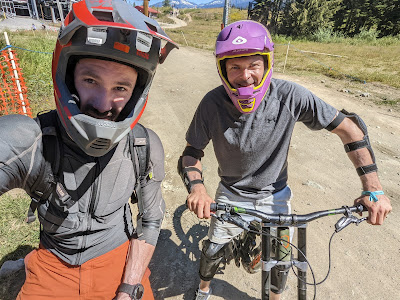 It's at this point I make friends with Jason, another mountain biker who can't pass up the chance to hit the downhill trails. Come tomorrow we hire some beasts of bikes head up the chairlift.

Whistler in summer is like Thredbo on speed, everything is bigger, faster and sketchier. There's also 1000 times more people... and I love it. We do the sensible thing and start with the green run Ez Does It to find out feet but then its blue runs of increasing difficulty all day until lifts close at 8pm. All the runs today were pretty epic, but my run of the day was definitely Funshine Rolly Drops... which is exactly what it sounds like.

When Jason takes a short break for lunch, I head out to another group activity- the Sasquatch Zipline, which at just over 2km is the longest zipline in North America. It lasts a massive 2 minutes of flying time, and I measured my top speed at 129.9km/h. Although Eden was initially scared (terrified) to be doing this, as soon as we started flying above the valley floor that all disappeared and she went upside down in our (thankfully 6 point) harnesses to make herself into a human cannonball. At this point she accelerated to at least 20-30km/h faster than me and there was no way I was catching up.

Once the sun finally goes down (at about 9pm) we head back to The Adventure Group where Cirque du Soleil has created a light show in the forest called Vallea Lumina. However in true Cirque du Soleil style, this is so much more than a light show, with a full story, multimedia projections and both ambient and featured sounds and music. 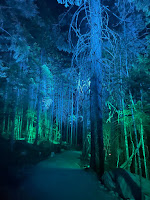 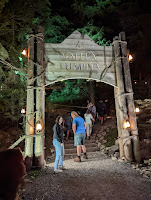 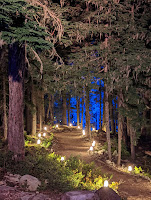 This is another lovely way to see the forest and appreciate the differences in natural landscape between Canada and what I'm used to in Australia. We quickly form a little group of Aaron, Georgia, Eden, Lauren and myself as we equally enjoy the sensory overload and quiet reflection which this unique show provides us. 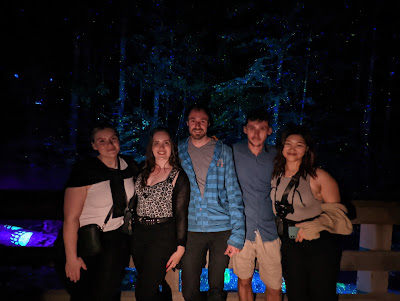 But I guess no Whistler adventure can be over without some classic sight-seeing, so on our final morning we head up to the Peak to Peak Gondola, between Blackcomb and Whistler mountains.

The view down this valley is absolutely spectacular and I can't help but send a few quick snaps to my aussie friends at home. Although the view was technically the same, I will admit the 11 minute journey did give us a little more time to properly absorb the wonder of this mountain... rather than from the zipline yesterday. 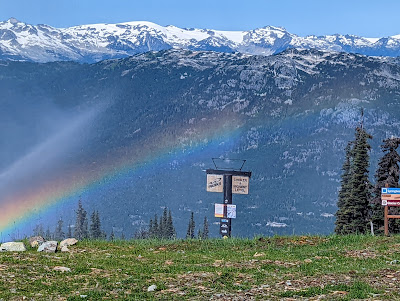