This morning starts the first of my Triple Adventures, and as with all good adventures I'm up at the crack of dawn to meet the shuttle bus out the front of my hostel. Cairns this time of the morning is oddly calm and serene, quite the opposite of the flurry of activity from the night before. 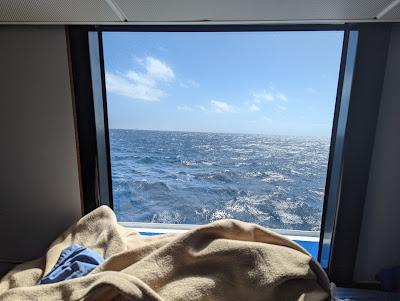 Given I knew I had to be up at 5.30am, I tried to get an early night by going to bed at 10.30pm, but my body had other ideas. After a week of 8hrs sleep per night and a day of doing not much, my body decided it was done sleeping after just 2 hours. It wasn't until 3.30am I got back to sleep and managed another 2 hours before leaving for the bus, dive shop, then boat to head out onto the reef. 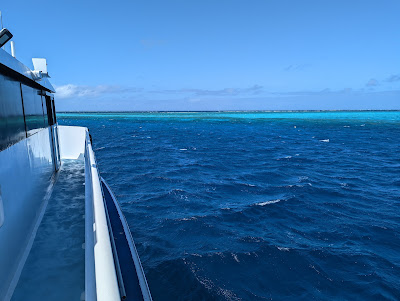 With 4 hours sleep and 2 coffees under my belt we're on the ScubaPro3 liveaboard boat with ProDive Cairns as we head out to the Ribbon Reefs with the hope of seeing dwarf minke whales. The trip lasts 4 days/3 nights with up to 10 scuba dives, depending on whale sightings, as this is the season for them. If we do see them we are allowed to get in the water and let them swim up to us, but don't let the name dwarf fool you, these whales are still 6-7m long and weigh 5-6 tonnes, so my fingers are definitely crossed to swim with these gentle giants. However, either way it's going to be a fantastic trip for scuba diving further north than I've ever been on the Great Barrier Reef before. 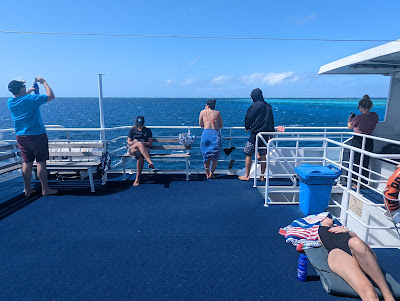 Most of the first day is spent steaming out to Agincourt Reef, where we make our first dive at Phil's. The dive site itself is pretty straightforward as we swim along a wall and back the same way, but we manage to see quite a few interesting fish and brightly coloured coral including clownfish and nudibranch.

Unfortunately the 5mm 3/4 length wetsuit provided was not quite enough insulation for me and by 15 minutes in I start feeling cold and by 25 minutes I'm shivering so much that my air consumption goes through the roof. My new dive buddy Marcus and I make it to 40 minutes back on the boat but he would have had enough air for another 20 minutes to be sure. 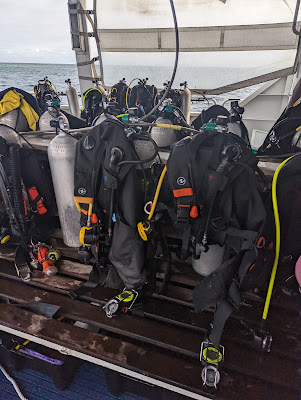 The second dive is a night dive at the same location, so with my torch in hand we head back down to the wall and go the right. This time I've paired up with Steve, Marcus and Katrina, with the plan of Steve and I splitting off at 100bar air remaining to leave Marcus and Katrina to continue the dive. Steve and I have similar air consumption so we turn around when he has 100bar and I have 110. The other 2 end up being last back on the boat with 60 and 80 bar respectively after nearly a full hour. By far the highlight of this night dive was seeing a turtle swim directly underneath us and playing with a sleeping dogfaced pufferfish.

The next day we wake up as the sun rises at a new dive site- Lighthouse Bommie on Ribbon Reef #10. This turned out to be my favourite dive site of the week, with a lighthouse shaped spire from 5m to 14m in depth with many varieties of fish and coral at the different levels. Adjacent to the base of the spire is a dome which we circumnavigate at 25m before coming back to the spire and spiralling up to a 5m safety stop at the top. My buddies for this dive were Steve and his partner Jan, and we had a great dive seeing lionfish, clownfish and everything in between.

Dive 2 of day 2 is at Monolith, a different site on the same reef where we followed a wall to the right until we reach a rock structure called the Monolith. On this dive I'm buddied with Steve and at the tip of the monolith we saw a plethora of marine life including a globe fish and white tip reef shark.

The last 2 dives today were at Challenger Bay, just to the left of Monolith, where Chris, Gabs and I saw smooth flutemouth, clownfish, spinecheek anenomefish, barramundi cod, spotted sweetlips and many giant trevally. During the night dive we also saw moray eels, a white spotted eagle ray, a hermit crab and tiny shrimp. 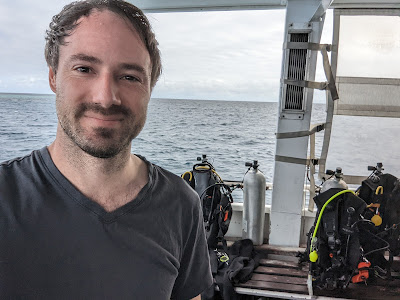 Apart from the diving, the liveaboard is a fantastic experience from a social aspect. Everyone on the boat has their own unique stories about how they got into diving, and of the experiences they've had along the way, but we end up talking about much more than diving. It turns out with a common interest in diving and the outdoors, we all have a lot more in common as we discuss life, the universe and everything from past relationships to upcoming travel plans. We also do talk a lot about diving 😅

The final day started with an early morning dive before breakfast, where I was buddied with Steve, Jan and Bence on Steve's Bommie at Ribbon Reef #3. Unfortunately my roommate Marcus only managed to get a 7 minute dive this time as his tank failed shortly after the start of the dive. Good thing Katrina was there to save the day by turning off his tank and letting him breath from her tank while they ascend. But after replacing the o-ring, they successfully joined us for the second dive on Steve's Bommie where we saw scorpion fish, frogfish, and many more fish I don't know the names of.

The last 2 dives are spent at Dreamtime, a dive site which ProDive hadn't been to before. It's a fairly shallow dive site at only 16m or so, but we get to see a lot of action on the wall to the left and the bommies to the right, including giant cuttlefish, an octopus and even a tiny jelly fish.

After a busy 3 days with a total of 10 dives, we clean the gear, pack up the boat and settle in for our last dinner together with all our new friends. As the stories of our diving subside we have a quiet game of ocean related trivia under the team name of The Pinkie Minkies (as we are all fairly sunburnt by this point). We might not have actually seen the dwarf minke whales on this trip, but it was still a week well spent under the sea. 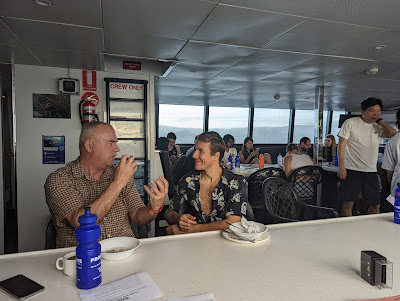 As we arrive back in Cairns the next morning, we say fond farewells to our new friends and exchange various forms of digital communication- I've now got a handful more dive buddies between Sydney, Melbourne and even across the Tasman in NZ. And as for the minkes... I'll definitely be back to visit them again!