August 09, 2018
It's 4am and today is the day of my first ever multi-stage mountain bike race. Up until now I’ve done single track timed enduros and XC marathons, the longest being the Convict 100. I’m up at 4am to fly at 6am, to be in Cairns at 9.30am, to be at the event centre by 11am and be race ready at 12pm. This involves reassembling my beloved mountain bike from the various pieces it packs as, in a specially designed bike-bag for checked luggage. By midday, the bike is reassembled and this goes off without a hitch. I’m race ready. 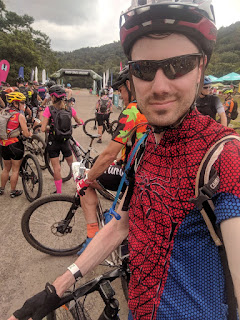 Unfortunately I didn’t read the race schedule very carefully and the “teams” of 2 riders start staggered from 12.30pm, but the “solo” racers (Cue: I’m riding solo) don’t get their turn until 1.30pm. By the time my staggered start is up its fair to say I’m quite eager and rearing to go… perhaps a little too much. In the excitement, I self-seed myself a bit low and spend the first 10min trying to overtake as many people as possible on the fire trail before I hit the single track where overtakes will be much harder and more effort intensive. Alas, in true 29yr-old-invincible-male-who-can-do-anything style, I quickly tire from the initial gunning it and start to think that perhaps I didn’t underseed myself to begin with.

This race is the Reef to Reef, a 4 day multi-stage mountain bike event based in the Cairns area of Far North Queensland. Stage 1, starting at lunchtime to enable arriving Thursday morning, is held at the Smithfield MTB Park adjacent to James Cook University. It’s a short drive from Cairns airport in my hired Mitsubishi ASX and judging from the comment of “The rush continues” by the hire car agent upon seeing my bike bag, I don’t think I’m the first person to arrive today. But back to the race. 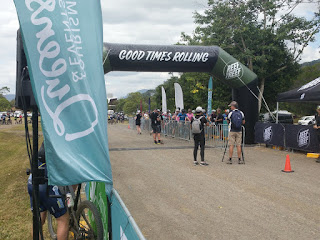 The single track at Smithfield is epic. Today’s stage is only short in distance, at 20km, however with a large climb of 800m. It is 90% single track, with just 5% fire trail and 5% sealed road. After the initial epic-fail of tiring myself out, which of course I’ll blame on not being used to the tropical climate, I hit the single track. I have a smile on my face from ear to ear which I can’t wipe off, even as some substantially older gentlemen and ladies pass me, cutting my ego down to the size it probably should be anyway.

I take the remainder of the stage at a moderate pace, slow enough that I don’t need to stop to catch my breath but fast enough that I maintain momentum and reduce total effort per km travelled. The first major climb sees me get a stitch half way up, but a quick break and it’s like it never happened. There are 2 more major climbs, the first of which is winding switchbacks of single track. It was a long slow slog up the hill but very rideable and dare I say enjoyable… better word: satisfying. The down hills were fun in parts but some steep loose gravel did get the better of me. Despite my low speed I may or may not have gotten rather intimate with a tree…. Which was still a better choice than down the embankment (cliff face) next to it.

The final climb is so steep that the fire trail has been paved. It’s the kind of angle you’d watch a 4wd crawl up and think “Wow that’s impressive that it doesn’t slip!”. Needless to say I didn’t spend a lot of time mounted in this climb, preferring to walk as I could use the bike a leaning post, exert less effort, and travel the same speed anyway.

The final run in was fantastic, a flow track with overall downhill, requiring only the occasional push to keep the momentum if ridden correctly. It ends with a series of rollers and berms which would rival Mt Stromlo and we are close enough back to the event centre that I can hear the music and there is a small crowd at the rollers cheering the riders on. I nail the first 3 of the last 4 linked berms to rapturous applause (not sure if because I rode them well or because in my knicks I’m dressed as Spiderman, but  I’ll assume the former). On the last berm, which is hit with the momentum from the first 3 and the enthusiasm of my initial I’m-a-29-yr-old-male attitude, I feel my rear tyre slide out sideways. Thankfully I unclip and grab the correct brake in time, so I don’t stack it and I manage to keep riding, thinking “few, that was a close one!”. Unfortunately even at my now slow speed the rear wheel slides again on the next turn and I realise something is very wrong. 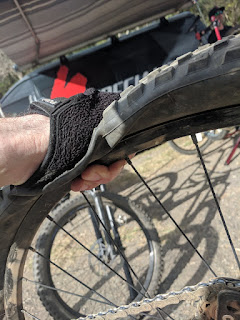 I stop the bike, look at my rear tyre and the rim is on the ground. I’ve got a flat. I panic for a second thinking I’ve rolled the tyre right off the rim, but it’s just the inner tube. My guess is that I pinched it on the last berm. The event centre is so close now that I can hear the music playing and I immediately decide “Nope, no way. There is no way I’m stopping this bike to replace the tube when I’m this close”. I ride another 100m so slowly that 3 riders pass me but I can’t keep the bike in control properly, even at low speed, and I worry about what damage I might be doing to the rim of my bike. The rim of the bike which I have to ride another 170km in the next 3 days… THE NEXT THREE DAYS. I realise how important it is that I don’t damage this bike any further and instinct cuts in- I run.

I literally get off my bike, hold it by the seat and jog. Yes I’m wearing cleated shoes, yes I’m running on gravel, but I can see the finish line and I just bolt. The crowd goes wild (literally, however with laughter) as Spiderman runs towards the finish line of a bike race… But with fresh legs from the last downhill I manage quite the pace and am only passed by 1 more team as I jog across the finish line, leading the bike with 1 hand on the seat. Thankfully the commentator realises it must be a mechanical malfunction and justifies my decision “whatever the problem is, Spiderman is going to make it”. I cross the line and feel both the success and failure of the situation concurrently. I head straight to the bike first aid tent and replace the tube ready for whatever tomorrow’s second stage will bring, but mostly I just want to sit down, have a beer, and laugh at myself for the most ridiculous finish to a MTB race I’ve ever done. Whatever happens tomorrow, it’s gotta be better than this… Right? 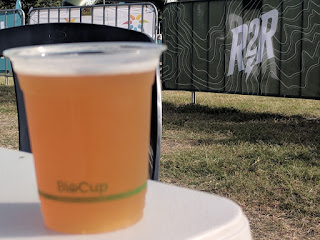 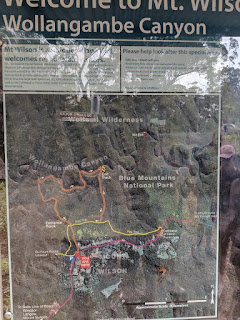 After getting up at 6am on a Sunday, it’s safe to say that by the time I reach Mount Wilson, I am keen and ready to go! Today’s adventure sport of choice is Canyoning and with a week of continuous heat behind us, lets just say that the idea of jumping into the freezing water of the Wollangambe River sounds amazing.    Having gathered our motley crew of friends, friends of friends, siblings of friends and friends of siblings of friends, we start the walk in from Mount Wilson fire station, where it’s just a short 3km to the start point. Although I’ve done some more serious canyoning in the past, today’s canyon (Wollangambe 1) is a nice relaxing lilo ride. While there is plenty of rock scrambling and jumping into deep water, it’s nothing technical like abseiling and no ropes are required. A hop, step and a climb down some rock faces and we’re at the start point, it’s time to pull out our inflatables of choice. Between us we have 2 lilos, 2 donut tubes, a giant sea turtle and a p