August 10, 2018
After the fleeting success of stage 1, I roll into the start chute for stage 2 of the inaugural Reef to Reef mountain bike race quietly optimistic. This stage is held at Davies Creek National Park, up in the tablelands, about 45min from Cairns CBD. Having learnt my lesson from stage 1, I don’t gun it off the start line. The race starts with a nice flat farm track to spread the riders out and I pretty much sit with the pack where I started. This stage should be easier than yesterday, I think, as I recall reading that it's 50km, more than twice the distance of stage 1, but with a similar total climb of only 600m. 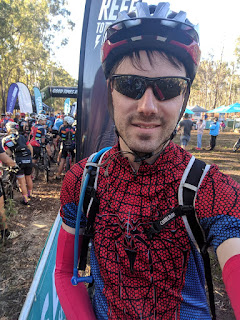 The initial flat section lulls me into a very false sense of security. There are 3 major climbs at roughly the 10km, 20km, and 30km marks, however in between that there are a lot of fire trail climbs, often after short steep descents which make it anything but easy (or safe) to keep the momentum going. I work hard, and start to feel my legs relatively quickly, around the 20km mark, and I’m not even halfway yet!

I was not expecting a lot of the single track today. Stage 2 was sold as less than 50% single track, mostly flat, and really more about the fire trails, but I’ve got to say I was impressed and not only how much single track they have managed to link together here, but also the quality of it. It might not be as steep or as technical as yesterday’s single track at Smithfield, but there were a lot of fast flow sections which were easy to keep the speed up and very fun to ride. There were also numerous creek crossings to keep things interesting. Some chose to walk, some chose to attempt to ride, but I think everyone enjoyed the cool off one way or another.

I set my goal today at finishing between 3h and 3h30m, but I was thinking it was likely to be 3h square because “it’s only 50km” and that would be an average speed of 16km, “surely I can go that fast”, but I could not have been more wrong. After the first hour it became apparent that 3h was impossible from here and even 3h30m would require me to maintain the current pace continuously without stopping for the remainder of the track. Around the halfway mark I did some quik-mafs and realised there was a distinct possibility that I could come in at over 4h! It was at this point that I understood what it meant to be in a multi-stage race.

It’s more than just completing the longest day, or the consistency to do well across various terrains. Although I often feel fine with no noticeable sore legs after a long 1-day race, let’s face it, I never get on the bike the day after, do I? Now that I’m doing just that- following one race with the next, that’s where the muscle fatigue is real. The other effect is mental. You can’t justify to yourself to “just push through it” when you’ve still got 3 days to go. You can’t be “nearly there” or “on the home stretch” when you know that the hardest is yet to come the following day. Similarly you have to ride more carefully, you can’t risk an injury, or worse- a mechanical, when you’ve only got the one body and one bike to keep using tomorrow.

I reach the last water station, and I know I’ve only got 15km to go with no major climbs, which helps. Unfortunately I start to tire, mentally and physically, which causes me to have less than perfect form, and not always great line choice. This in turn makes me ride slower, exert more effort to get back on the right line, and waste a lot of momentum… which then causes me to tire more quickly. 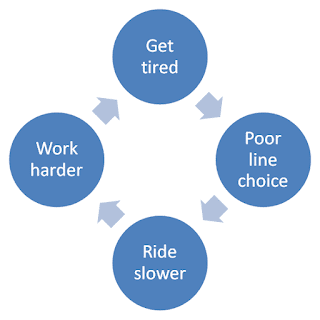 It’s a vicious cycle, but fortunate that it’s only really got me at the end. I take a short break, and after 5 minutes of being asked “You okay Spiderman?” by every passing rider, I decide the legs are less painful than having to say “Yep, I’m fine, thanks” one…more…time…

With my new found second wind, I thoroughly enjoy the last of the single track, and I’m on the home stretch. It was a more challenging day than I expected, which is backed up by my Strava activity, measuring the climb at 996m rather than 600m. I race along the flat straight where we started and clock in at 3h32m, just 2 minutes over my initial goal, and I’m happy with that.
Event:Reef to Reef 2018 Mountain Biking Race
Location: Davies Ck Mountain Bike Park, LOT 607 Davies Creek Rd, Mareeba QLD 4880, Australia