The Scariest Thing I've Ever Climbed

One does not simply walk into Perth, and not climb things. Especially when that thing is quite unique, and the tallest of its kind in the country. This week I'm in Perth for the Cape to Cape MTB race, but that's another story. Before I get to the mountain biking, I have a few spare hours to drive a little further and see the Dave Evans Bicentennial Tree!

Now, many of you may be wondering- what the hell Dave? It's a tree. You've been to California and seen MUCH bigger trees. Is this just a big Dear Evan Hansen reference about forest expertise? Well the answer is... no. Tall trees have long been used as fire lookouts, especially in Western Australia where many were pegged* for this very purpose. (*it's not what you think) 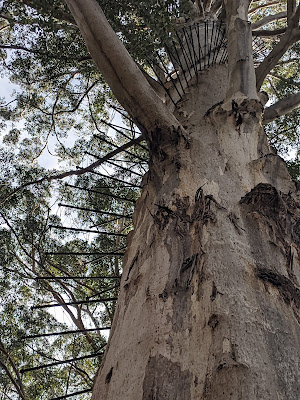 There are exactly 2 of these fire lookout trees remaining in climbable condition and both are within a 15 minute drive of each other in the Pemberton area of Western Australia. The best (and worst) part is that they just let you climb them! They are in national parks, and with nothing more than paying the day entry fee to the park you can walk up and climb the metal spikes in these trees up to the platform at the top. 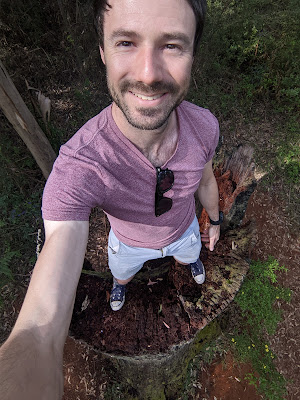 Arriving at the Dave Evans Bicentennial Tree, the scale of these climbs becomes apparent. At 65m high, it's a very significant climb. Fear and spiral aside, climbing a straight ladder this high would be enough of a physical feat on its own. Now to be perfectly honest, I thought it would be a fun and random thing to do as a side-trip on my Perth mountain biking adventure, and in no way did I think it would scare me. I'm used to climbing ALLLL the things, and spend a fair bit of my free time dangling at great heights above things either climbing, abseiling or canyoning, so given that this is literally open to the public for anyone to do, it couldn't possibly that bad... could it? 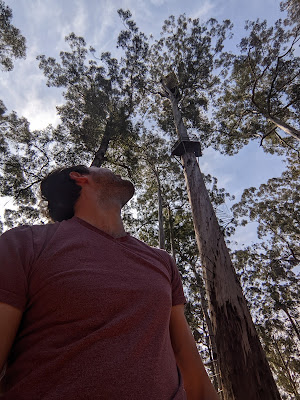 I initially walked up to the tree with my 360 degree GoPro in hand, figuring that I could adequately use my hand to hold something while still holding the selfie stick and could have climbed a ladder using 3 limbs anyway, but as soon as I saw this thing in person that was 100% definitely not an option and I've suddenly realised why only a photo from the bottom existed for this climb on the website I found. Back to the car, and out for take 2 with the GoPro securely mounted in my chest harness where it requires no interaction what-so-ever while I climb, but even with 4 good points of contact this is a non-trivial proposition. Just before starting the climb I saw 2 youngish (my age) guys stopped at the first platform, which is only about 1/3 of the way up. Frankly I couldn't understand why you'd even bother stopping, as I was thinking that with all 4 limbs working this couldn't possibly be scary... boy was I wrong. 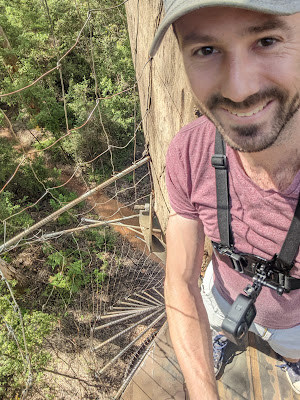 A few meters before I reached that first viewing platform, I made the mistake of properly looking down and I realised that this was in fact every bit as dangerous as it looks. Normally, that's not the case- you look down and heights are scary, but you're attached with ropes where 2 separate things would have to break in tandem, and you'd have to let go, before you could actually fall... but in this case, there's no ropes. You could literally just let go and fall to your death. I could feel my heart start to race, along with physical weakness in my legs and my palms getting sweaty (mom's spaghetti). This was it, I was actually scared, and that's not really something that has happened to me in the past decade, certainly not to this level! 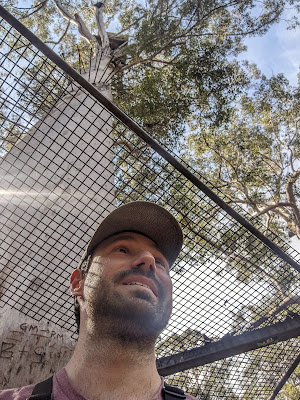 By the time I reached the viewing platform (only one third of the way up) I was sure I wasn't going to go any further. But I had all afternoon so there was no hurry, and after I caught my breath and let the physical symptoms of fear dissipate, I knew I could do it, and I was here just for this so why the hell not! The next third was probably the worst, as the spirally ladder narrowed and you were a lot further from the ground. It was probably easier and safer as the ladder was more vertical and less like you were leaning out over nothingness, but I certainly wasn't looking down at this point. 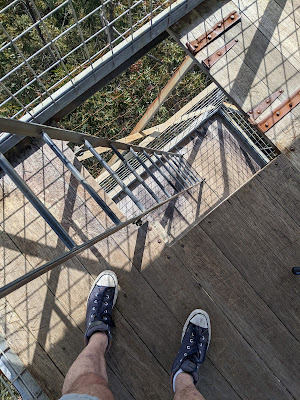 The last third was entirely fine as by this point you had entered the bottom of the "treehouse" section at the top, by which I mean it was a series of platforms (each ~2m square) stacked vertically 4m or so apart with normal straight ladders between them. Even though you were very much safe at this point, at this height the tree was starting to sway, so it wasn't without its own challenges.

The view from the top was amazing, but for me that was only half the point. It was a very enjoyable and humbling experience to find a height-related personal limit I didn't think I could push through, and then push through it- and I'm glad I did because the 2nd climbable tree (Gloucester Tree) ended up being closed for maintenance. 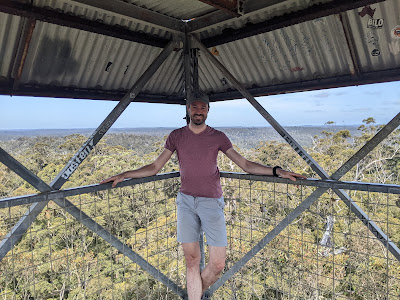 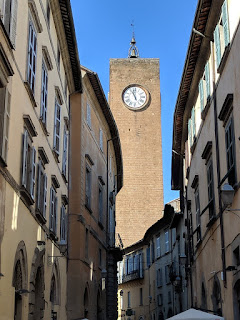