No trip to Canada would be complete without a bit of rock climbing, so on my last day in Vancouver Doug takes me to one of his local crags called Sully's Hangout in the Lynn Headwaters Regional Park. 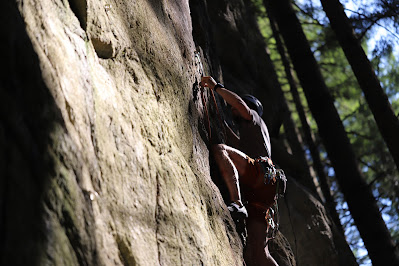 When I met Doug, we quickly discovered we had a lot of adventurous activities in common, which included rock climbing, but for me it was more the occasional indoor climbing session rather than taking it at all seriously as a sport. However since then I made a career change and as it turns out Software Engineers seems to universally love bouldering, likely due to the problem solving aspect and the bite size endorphin hit which comes with completing a climb, somewhat akin to moving that next JIRA ticket to done. So after a few years of weekly bouldering and starting to outdoor rock climb with Nick during lockdown, I'm a much better climber now than I was when he last saw me! 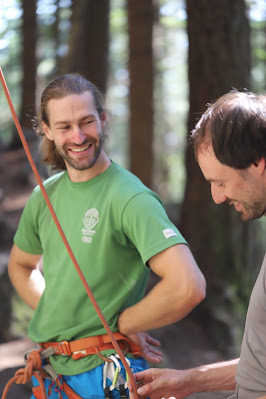 Sully's Hangout has 28 sport routes with grades ranging from 5.6 to 5.12b and is split into North, Centre and South walls. After the short (but steep) 30 min walk in from the carpark I start by warming up on a few 5.9's on the North wall called "Your Other Left", "Lefty" and "A Bunch of BS", which I on-sight, top and flash respectively.

Climbing with Doug is certainly going to improve my technique substantially, but in terms of the actual sport I more or less know what I'm doing already. However I will admit a fair bit of the terminology he uses is new to me, so I'll explain what each type of completion means to add some context to these random words. To "top" or "complete" a climb means exactly what it says, you made it to the top. It becomes a "send", or you have "sent" it if you top a climb without falling or hanging, that is the rope was only there as a safety feature but not engaged during the climb. If this is the first time you have climbed this particular route and you send it, then you have "flashed" it, and if you flash it without seeing someone else do it, or get specific advice from someone, then you are said to have done it "on-sight". 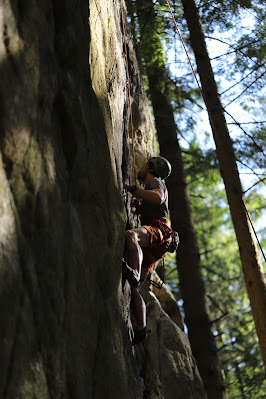 For the next climb we move onto the Centre wall and Doug leads on "3M" which I then also lead and top. It's graded at 5.10a, which is equivalent to 18 on the Australian scale, making it the hardest outdoor lead climb I've done to date, so I'm quite happy to have done it with no falls. This would have been a send except that I decided it would be fun to take a break in the middle to show a banana for scale, and have a snack of course, before finishing the climb.

From here we moved onto a few things that were a bit more challenging, starting with "Shake Your Lettuce" (5.10c) which I attempted lead climbing and took my first real whip (a fall from above your last anchor point). I eventually topped this climb on top belay after Doug showed me how it was done. 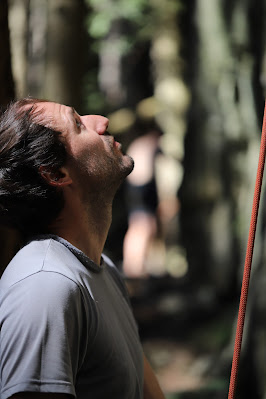 Throughout the day more of Doug's local climbing friends started arriving including Meghan, Andrew, Jack, and Matt. As they arrived we got into some harder climbs which were more at their level, and Doug worked on his current project called "My One Muscle" (5.11a), which I later gave a small attempt on (and failed of course). 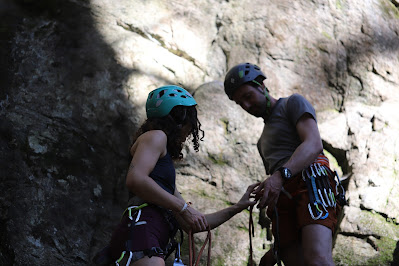 After watching a few other climbs and giving my arms a rest, there was one last climb which I was keen to try today called "Speed Dial #8", graded at 5.10d. I had a good run on my first attempt leading this, but the crux was fairly high and I struggled to find the correct placement, so after a few falls decided to give it up. Special thanks to Andrew and Jack for the commentary- by far my most professional blog video to date, thanking sponsors and all!

With a full day of climbing on top of 5 days of kayaking, I was really starting to feel it in my arms by this point, but I decided to give Speed Dial #8 one more try. With a bit of advice from Andrew, and watching him lead it, I ended my day by successfully topping this 5.10d on top belay so I could go home happy and suitably worn out.

All in a day's work for Doug, my Canadian stunt double, hospitable host, party planner, and all around top bloke, but for me this was the special day of climbing I'd been waiting for ever since I started planning my trip to Canada, and had been thinking about every time I opened my pack and saw the climbing shoes and harness I'd lugged all the way from down under.

As we head to the airport and stop for one last craft beer together, the sun sets (literally) on my Canadian adventure and it starts to hit home that I'm leaving. I'm going to miss this guy, and the new friends I made on Contiki and in Vancouver, but then I realise its not actually that bad. The world has mostly reopened now and I'm quickly accumulating more and more places in the world in which I have a friend's couch to sleep on, so its not so much a matter of "goodbye" as it is "until next time". After meeting Doug in Europe in 2018, seeing him in Australia in 2020, and now visiting Canada in 2022, we stand at the departure gates where I skip that stupid goodbye, and leave it with "See you in 2024" instead. Now we just have to figure out *where*...