Today's adventure is about 100m off the coast between Maroubra and Malabar, at a dive site called Magic Point. After getting on the boat at Rose Bay we gear up while the Sea Life V makes it way out of the harbour on a beautiful clear Sunday morning. 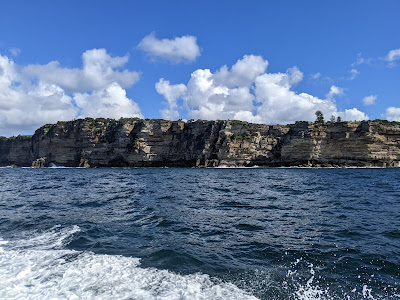 The conditions on the water are calm, with a surface temperature of 23 degrees and average water temperature of 21 degrees. The visibility is also substantially better than my last dive, at about 5-6m. Once at the dive site we descend to around 14m where we watch a group of grey nurse sharks chilling under an overhang. This is my first time seeing a shark bigger than a reef shark, so it was great to catch them on the GoPro, though I can't say I was scared- given that the scuba divers in the water at that moment outnumbered them 2 to 1!

The first dive went fairly well for me, but unfortunately my dive buddy Chris has ended up a bit underweight and had trouble controlling his buoyancy, causing him to work harder, breath more, and eventually be the first to signal low air. With him sharing my air we approached the dive guide but between trying to keep him down and the extra set of lungs we quickly brought my tank to low air as well. After a quick swap of Chris onto the guide's spare occy and me onto Lauren's, we started out ascent and finished the dive. Not quite the way I may have intended that to dive go, and although I wouldn't say I was panicking, I will admit I felt a little less comfortable than usual. In fact you can pretty much tell the moment where Chris started sharing my air based on my heart rate. 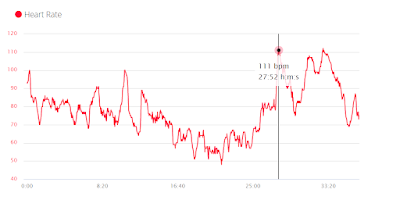 The second dive progressed better for Chris and I, who had taken down extra weights, but unfortunately not for Lauren who took on some water while initially descending and called it a day. After watching the sharks for a while longer, our guide came across an interesting blue fish under a rock as we swam slightly deeper down to 18 meters.

Of course I can't recall the name of said stripy blue fish, but my guide assured me it was rare and I was lucky to see it. Shortly after that I was the first one to reach 70 bar so Chris and I ascended to the surface. All in all a good day on the water, even if not everything quite went as planned. 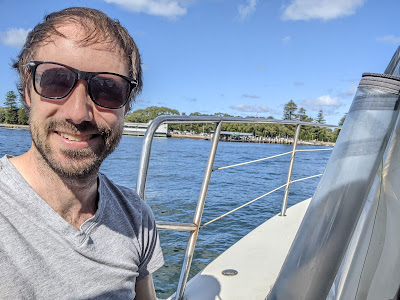