And here we are in April, ready for a relaxing Easter long weekend of sleep-ins, family lunches, and chocolate-induced and stomach aches... right? Wrong. It's Good Friday and having already gotten up early to pack my bags, I treat myself to a coffee and hot-cross bun as I walk through the gardens at The Grounds of Alexandria. One peaceful moment of self-reflection later and it's on with the adventure- next stop the airport! 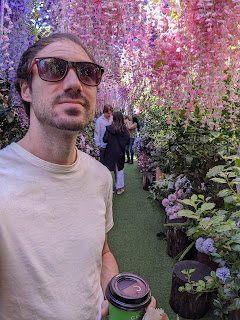 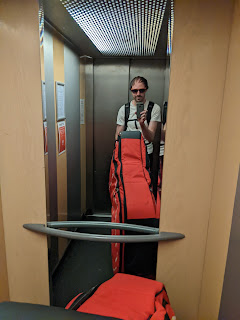 I'll be spending the Easter long weekend this year in Brisbane with Nick, Naomi, her uncle Howard, aunt Julie and cousin Katie as we tackle 160km of gravel and dirt, the Brisbane Valley Rail Trail. I arrive to a warm welcome, a comfy bed, and as many beers as I can (though probably shouldn't) drink. Go team #halpals! 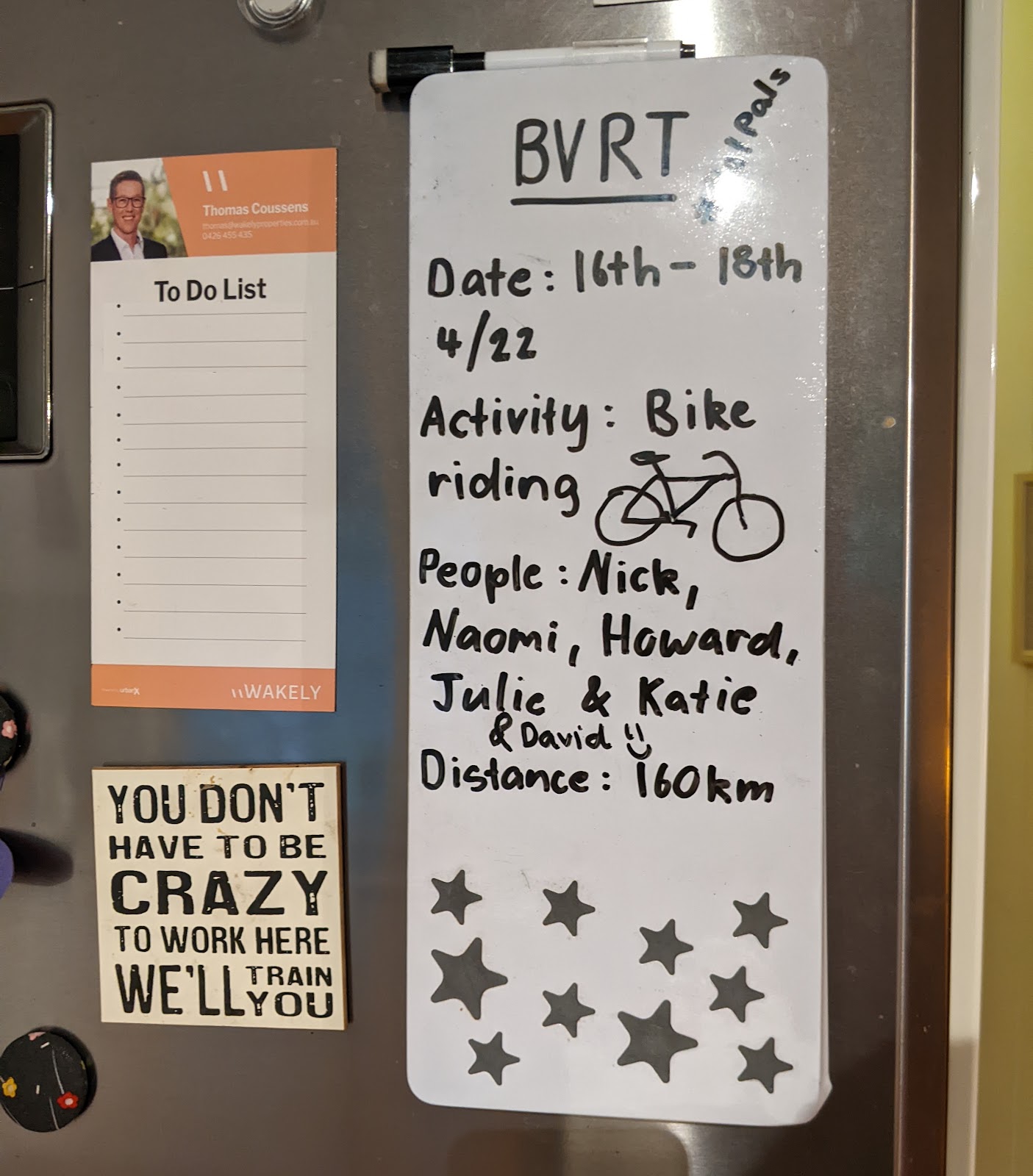 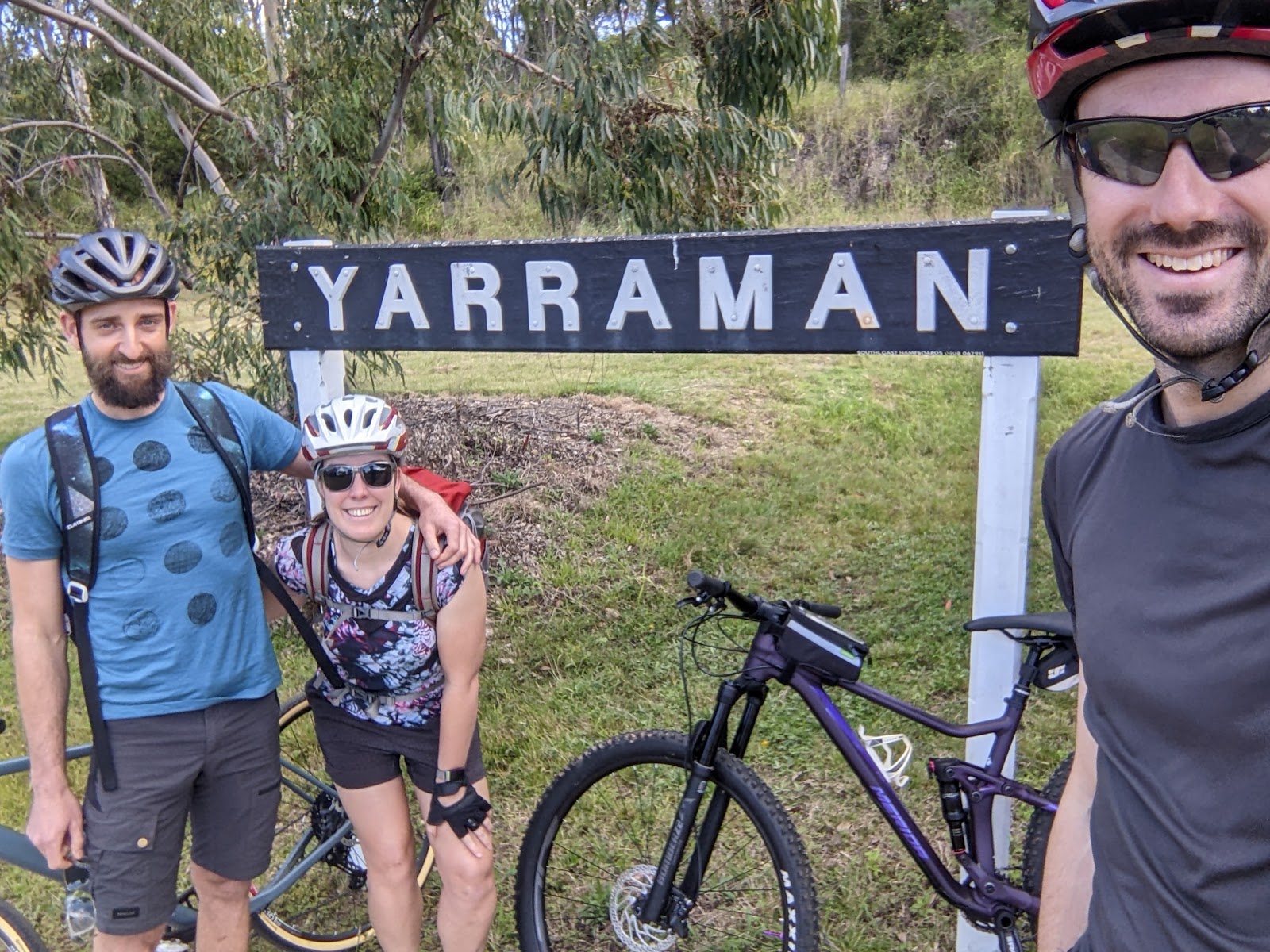 We start Saturday with the ultimate car-shuffle, leaving one in Ipswitch, one in Linville and taking the shuttle bus to get 6 people and bikes to Yarraman, where the trail begins. As the name suggests, the Brisbane Valley Rail Trail follows what used to be a rail line, decommissioned in 1989, so throughout the trip we pass disused stations or at least signs marking where the station used to be. The trip is downhill overall, with shallow gradients for the uphills, which is a good thing as I've opted to carry all my gear on the bike between hotels each day. 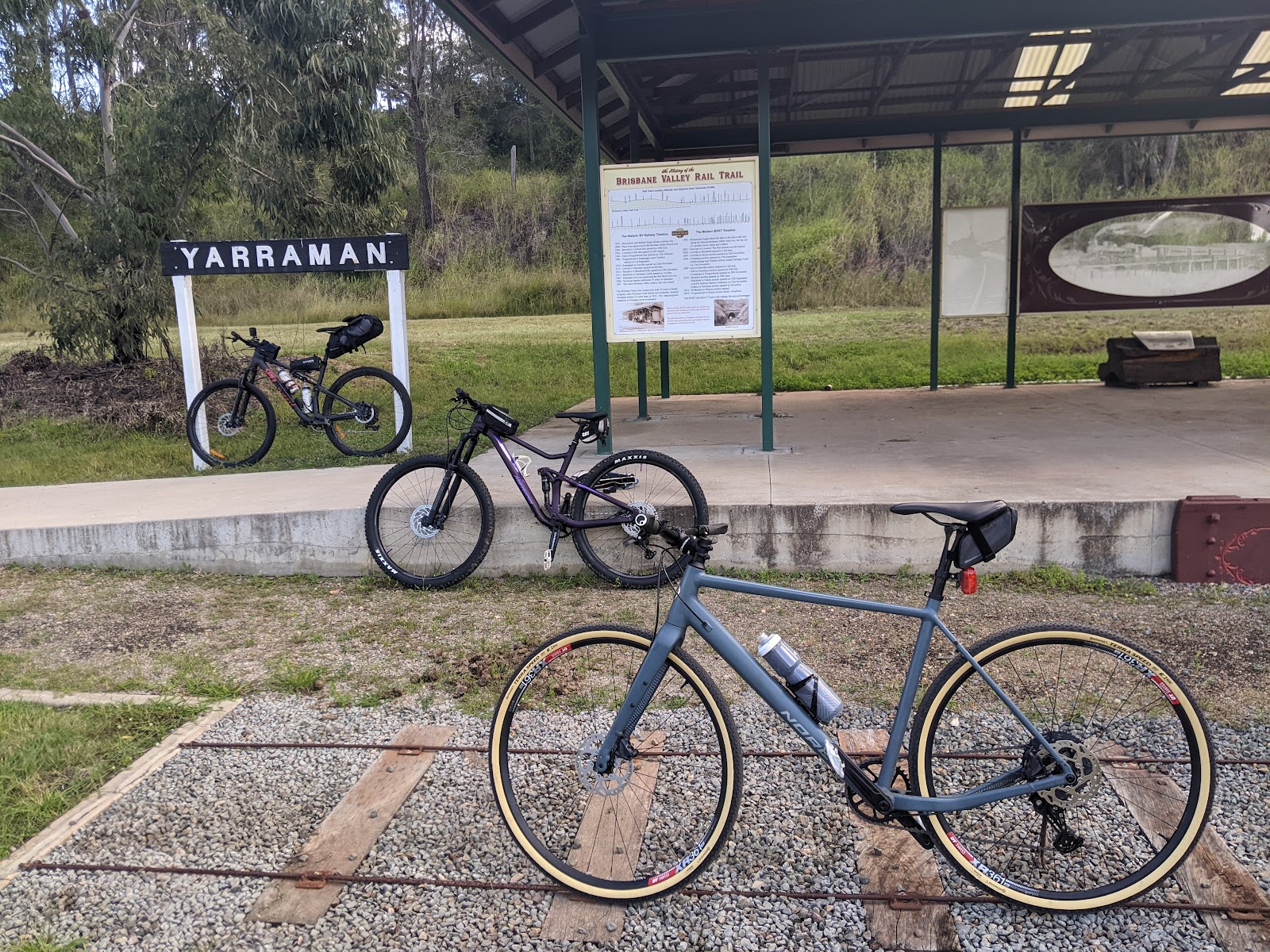 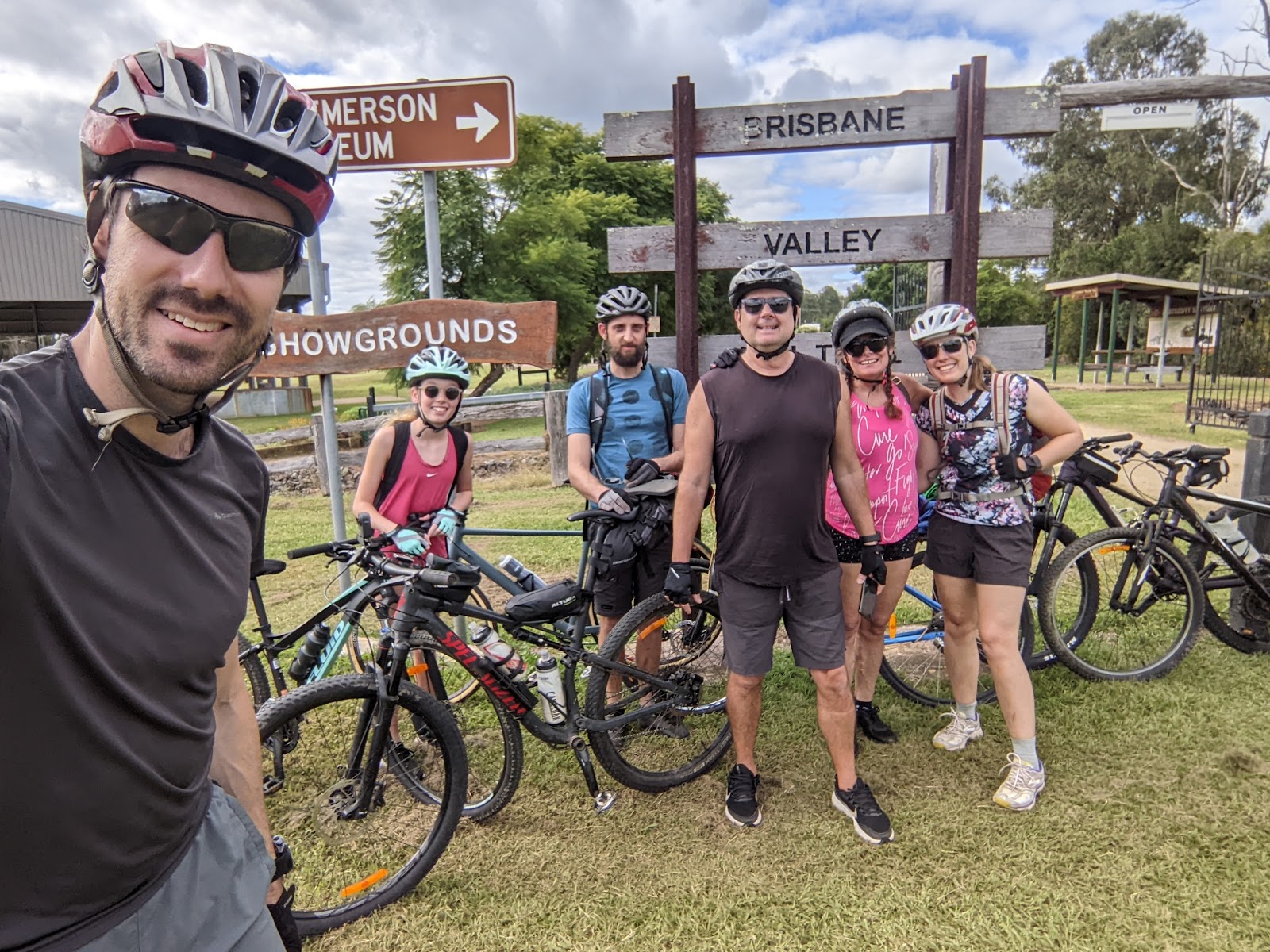 Having left Yarraman about midday, our first stop is lunch at Blackbutt care of the local bakery, then we take the obligatory photo at the BVRT sign and start the long downhill into Esk.

The first day is by far the most spectacular in terms of views as we arrive at our airbnb in Linville just in time to enjoy a sunset beer at the Linville Hotel... along with every other person and their bike. 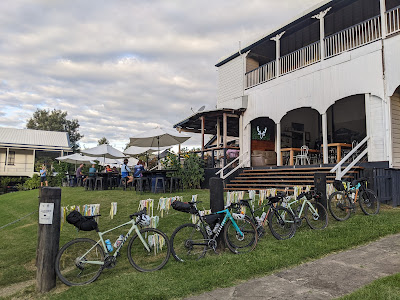 With 43km under out belt we felt moderately invincible starting the second day, however it turned out to be a little harder than the first with a few undulating sections, one reasonable climb and a lot less downhill. 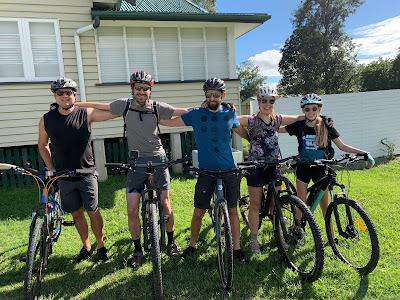 Despite taking a little longer to get there than expected, we enjoyed breakfast at the Kai Lounge in Moore before continuing onto Toogoolawah for lunch, passing a few interesting murals on the way. 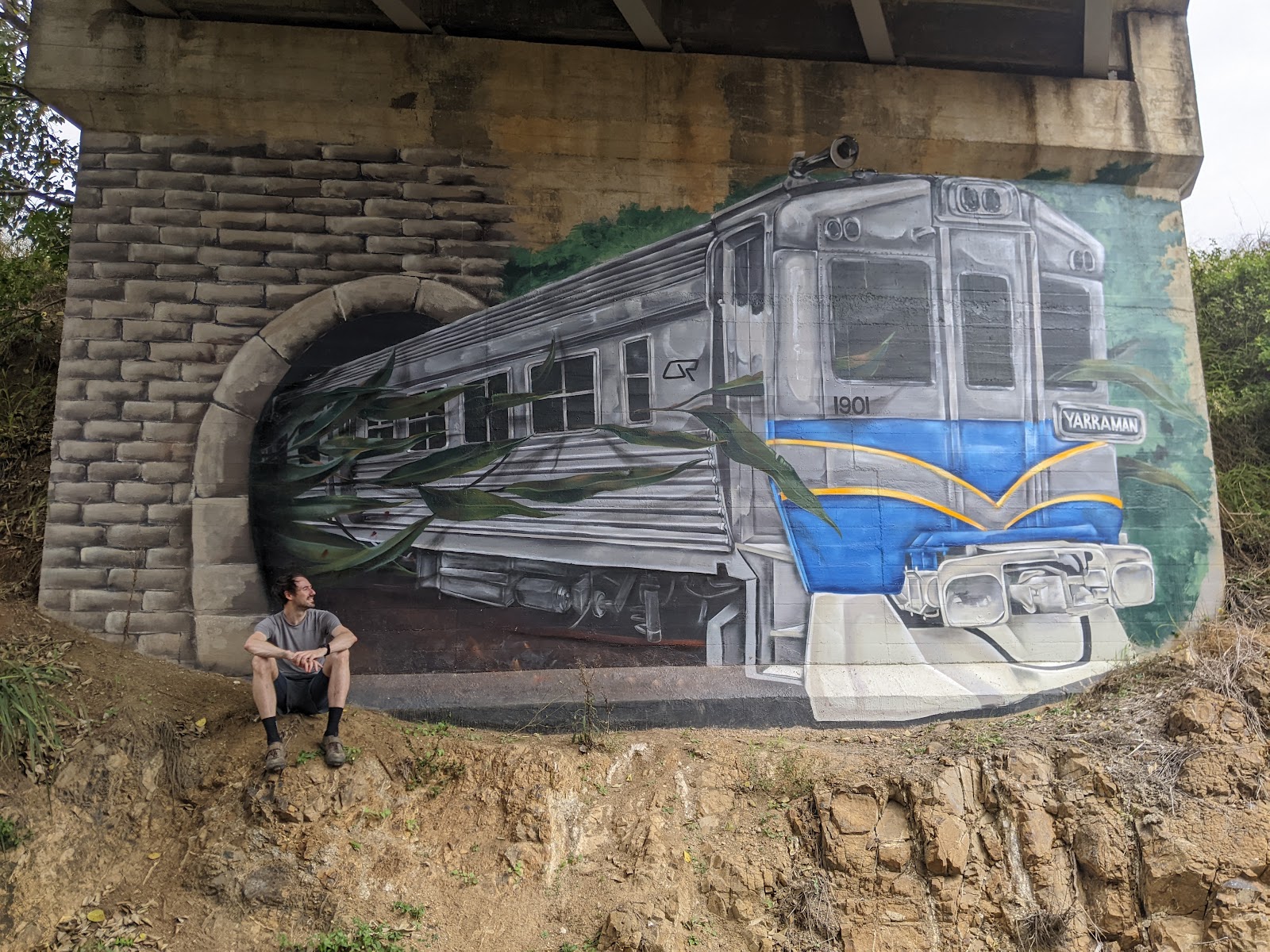 One of the highlights of this section was riding through the train tunnel, though in hindsight it might have been better if we took off our sunglasses before we entered as it turns out that despite being able to see the light from the other side, the middle of the tunnel is... well, pitch black. It may also have been preferable to not have tried to ride 3 abreast to get a nice GoPro shot as there was a distinct moment when I got some serious wobbles (exacerbated by the weight of the gear on my bike) while in between Nick and Naomi who were trying desperately not to ride into the ditches on either side.

The Exchange Hotel at Toogoolawah deserves a special mention, not only for actually being open on Easter Sunday but also because the food was delicious, plentiful, and hand delivered by the chef. Significantly higher standard (and portion sizes) than we expected from a middle of nowhere pub! 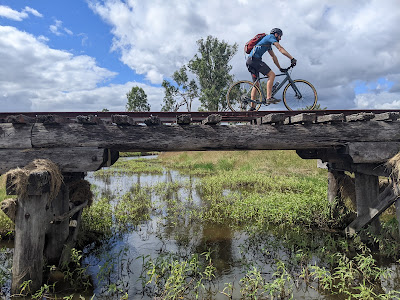 Once we finally rolled into Esk at 4.30pm, its safe to say we were all starting feel it, if not in our legs then at least our bums. We've ridden 100km to this point and spent something like to 10 hours on those seats. Thankfully the Esk caravan park has a very nice (adults only) pool waiting for us, which we have entirely to ourselves as we celebrate our success over a couple of beers and freshly cooked pizzas. 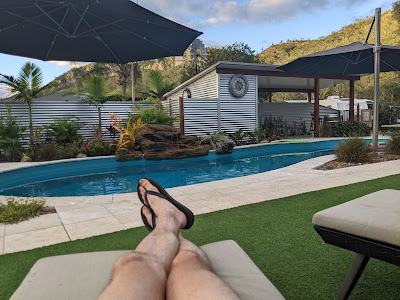 The final day was just Nick, Naomi and I as the others had decided to enjoy a nice sleep in and head home early. We stop for ice cream at Coominya then fight the crowds at Fernvale bakery for lunch before hitting pavement for the last 8km of today's 68, arriving back at Wulkuraka where we left the car.

A quick car/train reverse shuffle later and we're back at the #halpals base of operations and enjoying a dip in the spa, toasting to our success. As we pack our bags, dismantle our bikes, and I say goodbye to my newfound furry friend, we reflect on how great it was to get out of Sydney and finally ride the 168km of rail trail after many previously failed attempts. 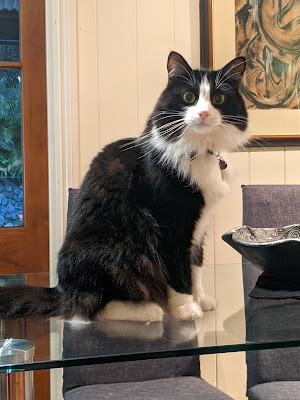 Relaxing long weekend? Pah, who needs it- I loved every minute of my action packed Easter weekend, and given the breakfast conversation was about which rail trail we are doing next... I suspect the others did too.
Bikepacking Mountain Biking
Location: Brisbane Valley Rail Trl, Yarraman QLD 4614, Australia