With the shroud of covid slowly lifting, I've been finding more and more chances to get outdoors. This weekend was no exception as a friend of mine had just bought a new wakeboard and was keen to try it out! Had she ever wakeboarded before? No, of course not. Have I ever wakeboarded before? Once, many years ago... and I sucked at it. In fact from memory I barely managed to stand up and go a few metres before faceplanting back into the water, but hey, that's water under the...wakeboard. 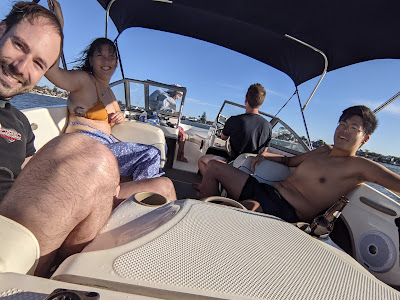 So here we are, on an unusually warm and beautifully sunny Saturday afternoon in April, out on the Georges River near Taren Point. I'm not going to lie, it took a few faceplants to figure out the right technique to stand up and get out of the water, but I eventually got the hang of it!

Turns out it is remarkably like snowboarding, at least in balance and stance, but backwards. Snowboarding is a downhill sport, so you're pretty much trying to lean forward to keep your weight centred on the (downward sloping) board. Wakeboarding is pretty much the opposite, where you are being pulled from the front and need to keep your weight at the back so the boat pulls you along the water... rather than into it. But what a truly awesome day! 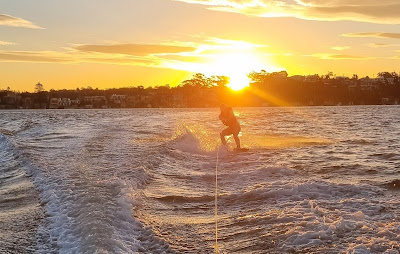