The Man From Thredbo Valley

There was movement of the station-wagon, for the word had passed around
That the bikes from Sydney town had gone to play,
And had hit the Thredbo mountain - each was worth three thousand pounds,
There was very nice gear out there on display.
All the tried and noted riders from the suburbs near and far
Had mustered at Thredbo Diggins overnight,
Mountain bikers love hard riding where the steepest mountains are,
And the chairlift saves our legs, what a delight. 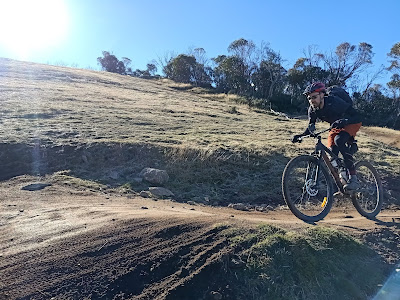 There are high suspension downhill bikes, with shocks as tall as trees,
And full-face helmets seeming common-place;
And people wearing armour from their head to toe to knee,
With a bushy beard, ironic, on their face.
But our bikes are tough and wiry - just the sort that won't say die -
There is courage in their slippery lack of tread;
And we bare the badge of gameness in our bright and fiery eyes,
And nothing but some foam upon our head.

We're riding Thredbo Valley, up by Kosciusko's side,
Where the hills are twice as steep and twice as rough,
Where a tire risks a puncture from the flint stones every stride,
The one that holds their own is good enough.
And the Thredbo Valley riders ride the Thredbo Valley Trail,
Where the river runs those giant hills between;
From the Village, to the Diggins, and then under Ski Tube rail,
Nowhere yet a better flow trail I've seen.

So they found the track continued past the Lake and rail bridge,
Steeply climbing and descending technical,
So much for downhill riding, we were climbing to the ridge,
The up and down felt more symmetrical.
The jumps had gaps, the berms were tall, we hit them left and right,
Riding boldly, we did not fear the spills,
Eventually we have Gaden Trout hatchery in sight,
But the road out is one hell of a hill.

Then fast the downhill followed, on the tarmac deep and black,
Resounding to the thunder of their tread,
As we go across the main road, to the dirt that calls us back,
And the sign "Bay Trail" points us straight ahead.
Through the stringy barks and saplings, on the rough and broken ground,
Across the hillside at a racing pace we went;
With a phone call from the others, they're in Jindy, safe and sound,
Best not be late, or we'll need to repent.

And down by Banjo Patterson's, where the pub-food sits and waits,
Around the bay we cross the finish line,
After starting up in Thredbo, with a group of my best mates,
We ride cold and tired into Jindabyne.
And where around the Snowy Mountains, reed -beds sweep and sway
To the breezes, and the rolling plains are wide,
The man from Thredbo Valley is a household word today,
And we all will tell the story of this ride. 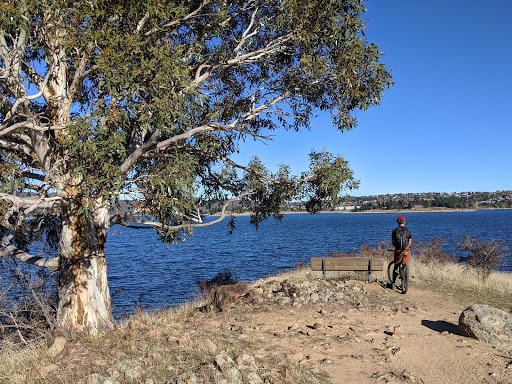