Today I’m heading down to Bungonia National Park to conquer a long time fear of enclosed spaces. While I’ve regularly been abseiling, climbing and canyoning, I’ve never been caving before, despite my uncle’s best efforts. Further to that, my brother is in town and keen for some good Australian outdoor activities, so an overnight camping trip to go caving seems in order! 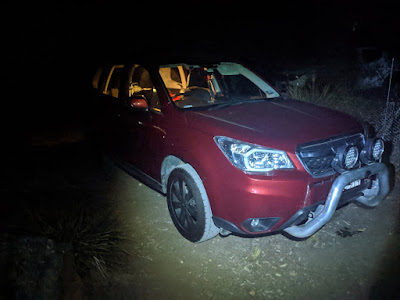 We arrive at Bungonia campground just as the sun sets and start setting up camp. My brother and I spend a bit of time rearranging the car and sorting out our caving clothes while Nick, Naomi and Matt get started on dinner. By the time we sit down to eat, everyone is oddly quiet- half enjoying the serenity of bushland around us, half milling over the treacherous adventure to come. I know which half I was in... 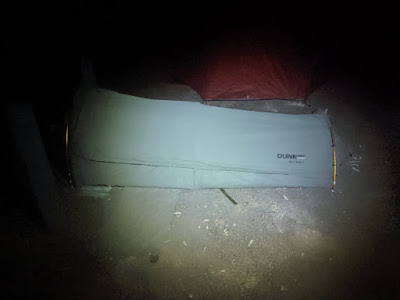 After a filling meal we gear up, pack the bags and pile into the Forester for the short drive to the cave entrance. The cave we’re tackling today is Grill Cave, probably the easiest, but definitely the most accessible in the area. We are all relative newbies to caving however there is no lack of outdoor experience between us, so Grill Cave is a good fit. 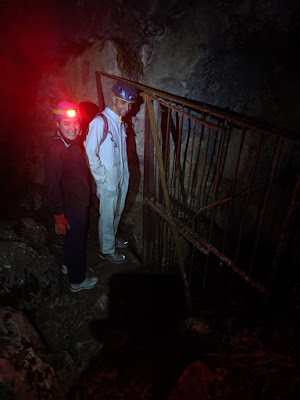 Once we reach the cave and head in, I wonder how much my fear is going to slow me down. At the start all the caverns are wide open spaces and the way forward/backward is clear, but even as I head further down the rabbit hole I discover that I’m really not all that scared. For starters, with 5 people wearing head torches close together there is much more light than I would have expected and we even manage to take a few photos. 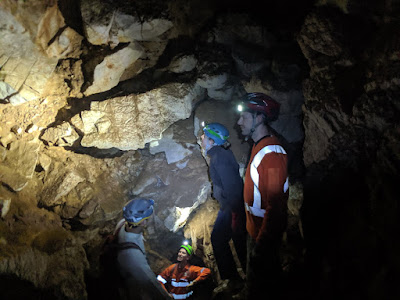 The next most concerning thing after darkness is probably navigation, and my uncle is 100% correct in his advice to “regularly look back, because it looks completely different in the other direction”. However this cave has ladders, which helps a lot in the navigation as you can often see the way you came or the way you should go based on the next ladder. (Naomi even counted ladders as we went, which worked very well too!) 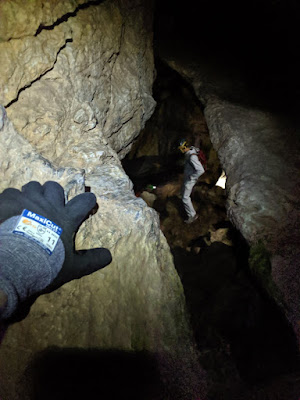 After the first few chambers there were a few narrow openings which we could see into, and Nick opted to go first. I honestly thought I wouldn’t do it, but as soon as Nick told me he could stand up after only a few metres of crawling, I went in. After this, everything was comfortable and I couldn’t stop smiling knowing I’d come down here and done something I wasn’t sure I could do. 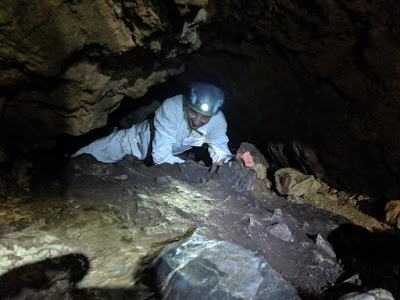 It was just shy of the 2hr mark when we all collectively started feeling like this was pretty great but we should turn back soon, then Naomi yells out “Look, it’s possum rock!”. Initially confused we ask what Naomi is talking about, but once she explains she had been naming rocks the whole way we quickly get the significance. Naomi has recognised somewhere we’ve been already so we’ve made a loop! 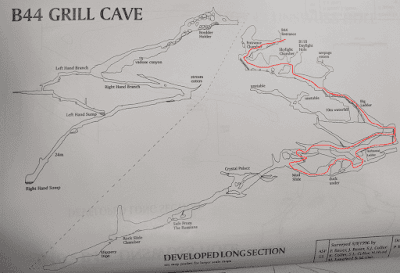 Map scanned from "Under Bungonia"...AFTER we went caving.

I’ll admit I was sceptical at first, but a few metres further and we came out behind a ladder we had definitely been down and that was it. We headed back up the remaining 4 ladders (known because of Naomi’s counting) and exited the cave to warm air and the start of some light rain. Bungonia campground is well equipped with hot showers so we hit these and head back to camp for a quiet drink and some dessert before bed. 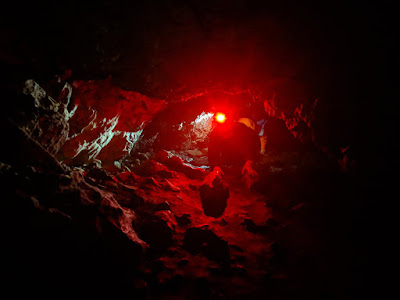 All in all a fantastic entry into the world of caving for my brother and I, with a huge thanks to Nick, Naomi and Matt for organising the trip and making me feel 100% comfortable at all times. I genuinely enjoyed myself and can’t wait to do it again. Next stop Fossil Cave! 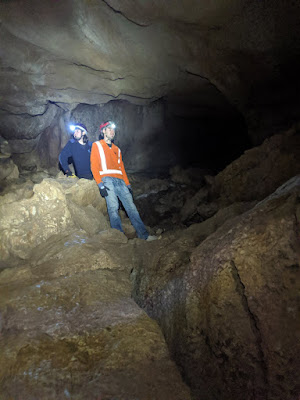