September 03, 2019
As you would know, my snow sport of choice is most definitely snowboarding. Last year I started doing backcountry snowboarding on a splitboard, which involves donning skis for the walk up the hill, but that doesn’t really count. Despite my many years on the slopes, I’ve never actually tried skiing! Long story short, I’ve been promising Benj and Mez (and Alan, Andrew, Belmo, Mel, and the rest of the crew) that one day I’d try skiing… and today is that day! 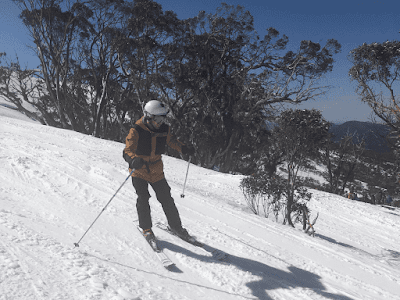 This week I’m in Thredbo, staying in a lovely (and reasonably priced) cabin by the Thredbo River, a mere 400m from the centre of town. The week starts with the wedding of my cousin Sam and his (now wife) Dariya, and I couldn’t be more happy for them! But on to this “ski” thing… 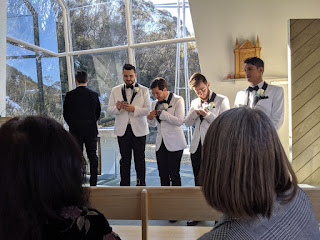 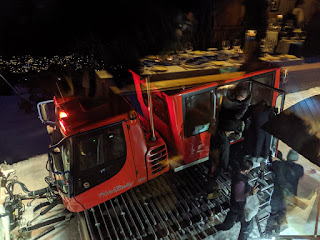 I picked up my hire skis at 3pm on Monday afternoon, so I’ve got an hour to see just how beginner I really am. I’ve watched Benj teach people to ski for years, so I’ve got the theory, and I know how edges in the snow work, but actually doing it in practice is a different story. I’m pleasantly surprised to find that I can stand, stop and snow-plow turn without too much trouble. Pizza…French fry…Pizza…French fry…

The next day I wake bright and early to get first tracks… in the beginner area at Friday Flats. I leave the sleepyhead in bed and try to get up quietly, so she can enjoy her sleep in, but pretty sure I failed and woke her up anyway! I manage 3 runs off the Easy Does It Chairlift and I start to make semi-parallel turns, then it’s time for the lesson. I chat to the instructors and get myself into a beginner, rather than first-timer lesson, given I can already go/stop/turn in some way, and we head up the Gunbarrel Express Chairlift to the Merritts area.

At this point I realise I might have slightly over-seeded myself as the others in my group are a lot closer to actual parallel turns than I am. After only a few minutes we cross paths with the next group down and I offer to my instructor to transfer down a group but she says I’m fine and I’m learning quickly. I guess I’ll learn more being the bottom of one group rather than the top of the other anyway! 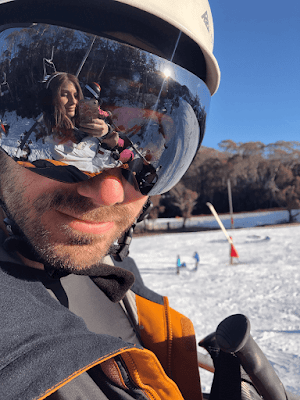 It’s a great lesson, big shout-out to my instructor Sarah, and we get back down the mountain to Friday Flats where I meet up with the sleepyhead mentioned earlier. Three lifts later and we're at the very top of the mountain, Australia’s highest lifted point. Given my abilities on skis are quite beginner, (lets remember this is still my first day!) we take the longest (and flattest) run of the mountain, Village Trail. 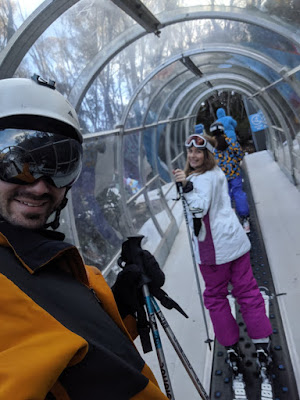 We reach the bottom without too much trouble, but it is after lunch that I set out to hit the hard stuff. My goal for this trip is to Ski down a blue run, and Benj always boasts about people he’s gotten down High-noon on their first day, so that’s where I’m headed. The run itself is okay at the top but fairly slushy at the bottom, but either way I’m not going too fast, I just want to make it down in one piece!

My turns are less great on this new steeper terrain, but I manage to get down High-noon with only 1 stack and a couple of close calls. On the flatter sections I find myself feeling confident and taking a little speed, which is nice, but overall I find it a humbling experience to be a beginner on the mountain again. 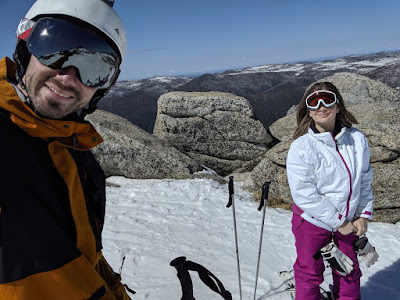 All in all a great day on the slopes, but a quick thank you to 3 people who made this possible. To Benj, for all the years of subconscious ski training, to Mala for putting up with my terrible skiing (and the occasional filming!) and to Sarah, my one-day ski instructor. As Sarah said to me at the end of that lesson, “You’ve done really well today David, and I’m sure after this you’ll find that you enjoy… Snowboarding a lot more.” 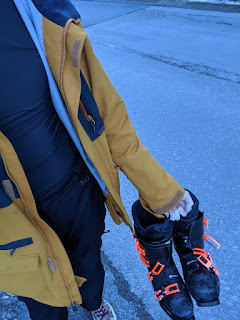 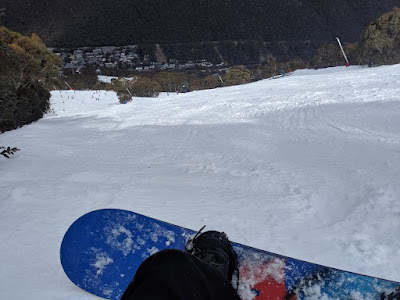