Another day, another adventure, another early morning flight… 6am takeoff means 5am at the airport and 4am wake up, which wouldn’t be so bad if I hadn’t gotten to sleep at 3am having been awake all night unable to sleep with excitement! 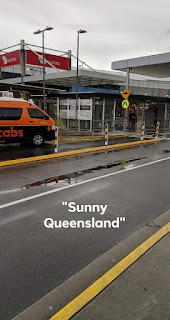 Today I’m in Brisbane. It’s just for the day but I get to tick off a pretty cool bucket list item- abseiling down a bridge pylon! I land in Brisbane and it is pouring with rain, not an amazing start, but I know the bridge climb and abseil goes on in all weather so I jump straight in an uber and head for that bridge! 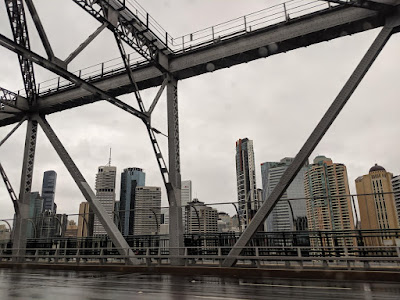 The bridge climb and abseil is at the Story Bridge on the eastern side of Brisbane’s CBD. It pours with rain as I walk into the Story Bridge Adventure Climb building, but by the time we get fitted in harnesses and do the required safety briefing it stops raining just as we get on the bridge. 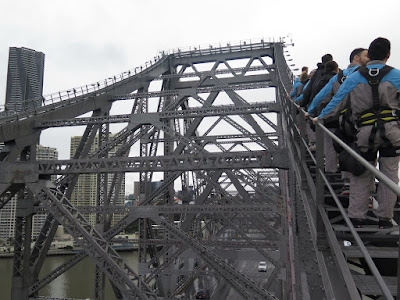 The Story Bridge is 79 years old today (happy birthday!), having been constructed shortly after Sydney’s iconic coat-hanger, designed by the same John Bradfield but with a completely different design. Apparently by this point he was done with designing new bridges so this is basically a copy of the Jacques Cartier Bridge in Montreal… Canadian friends, eat your heart out.

The climb (walk) up is similar to the Sydney BridgeClimb, and although it is not as high, the experience of climbing a structure with an active roadway is just as interesting and unnerving at times. Once at the top, the view is nothing short of breathtaking and despite being overcast we get some great photos, just happy to still be dry! 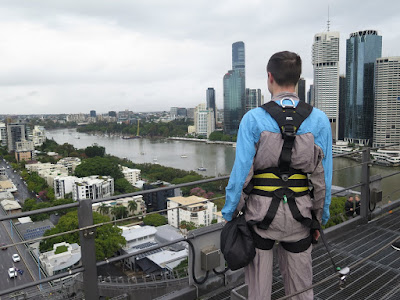 As we re-enter the bridge structure, I feel like I’ve spoken too soon as the rain begins, however 15min of rope prep later and it stops just as we start to descend. The abseil platform itself from the top of the pylon is well equipped with the many levels of redundancy you’d expect from a tourist abseil, however that doesn’t make this any less interesting for me. At 30m high, it’s nowhere near my largest abseil but still something special to be descending down from a bridge under the roadway to the parkland below. 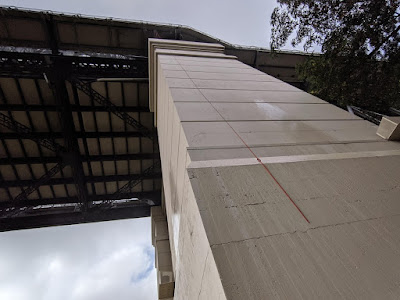 Unfortunately I wasn’t allowed to take my GoPro on the trip with me, so there is no 360 degree video, but the photos clearly show how much I was enjoying this, thanks in no small part to the friendliness of the good people at Story Bridge Adventure Climb. 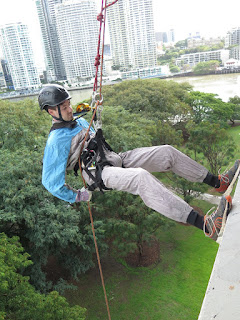 As I leave I find out that there are only 3 bridge climbs like this in the world;
So I’ve got one left! And although you can’t abseil off it... you can Bungy-Jump! True Story… bridge.