April 19, 2019
After a short sleep in (bed was warm, okay?) I make a hearty breakfast of oats and coffee and get back on the trail. 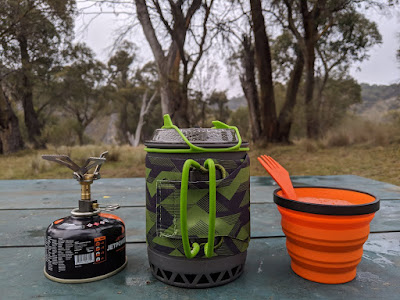 At a distance of 60km, today is planned to be one of the longest days as I make my way from Blues Waterholes to Gavel’s Hut, via 7 other huts on the way. I say planned because the way this trip works is that I can camp at any of the huts, so I’ll stop either when I start to run out of daylight or feel too tired to continue. Because of this, there is a fair bit of leeway from day to day, but I’ve also got an extra day at the end and a half day in the middle so if the riding does end up taking longer than I expect, I’ll still be able to complete the trip! 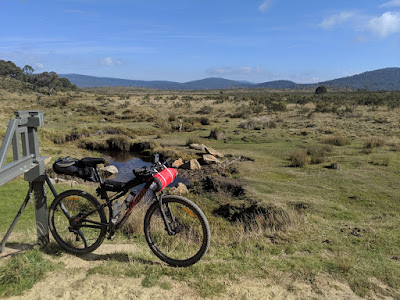 Being a long day, this is a good test of whether I can maintain a good average moving speed, but at only 1000m climb it isn’t all that steep. Riding through the Bimberi Wilderness, I pass the turn off to Pockets Hut and decide to give it a miss. I’ve ridden this section of trail before and been to Pockets Hut twice so I don’t see the need to stop there again. I make it to Gurrangorambla Gate with good time and start a small climb up the dirt road to where the next fire trail starts. 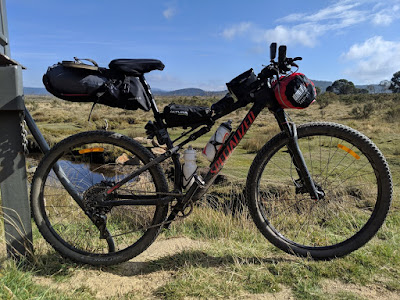 Heading down this fire trail towards my first hut stop of the day is a lot of fun as I descend much of what I climbed yesterday afternoon and this morning, however it isn’t smooth sailing and is quite a bumpy ride. Naturally I stopped at the top and put the 360 GoPro on the handlebars to record the fun descent, but about half way down I look at my handlebars and see no GoPro…just the shorn off piece of plastic which was holding it. 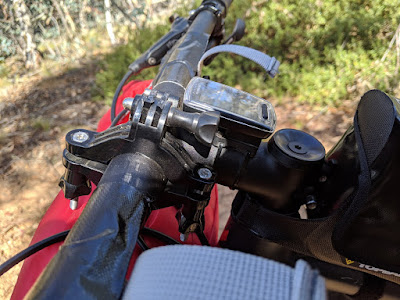 It had been less than 1km from the top so I didn’t have a long area to search, but for anyone who knows my previous history of GoPros and either destroying them or losing them in the Snowy Mountains, you’d understand why I was more than a little worried. “Oh no, not again”, he thought. 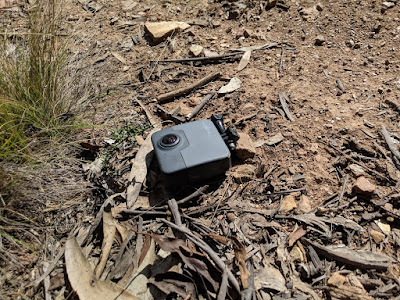 Thankfully this time was a good news story as I found it about half way back to the start, and even more remarkably, it isn’t scratched or damaged! So off I head back to my bike and to continue down the hill to the Murrumbidgee River, where I get remarkably close to a herd of wild brumbies. These hills are scattered with them, particularly when you’re away from the roads. As it turns out a man on a bike doesn’t pose much threat to them so they cross the path and move around me but don’t run off at first sight. 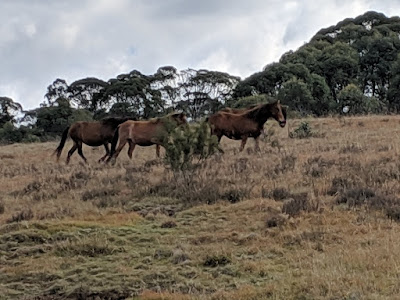 From here I backtrack up the hill on foot and walk in a few circles as I try to find the first hut I’ll be stopping at today, called Love Nest in the Sallees. Despite having GPS coordinates for the hut, it was surprisingly hard to find. The walking track was barely an indent in the grass, and even then only visible if you got low to the ground and looked at the right angle. I suspect this hut is not visited all that often! 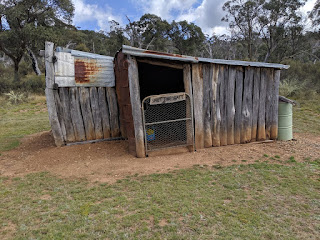 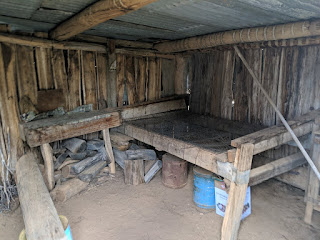 After crossing the Murrumbidgee River, next stop is Peden’s Hut. My feet are now soaked as I didn’t have much choice but to walk through the river, but at least it is a beautiful sunny day and now reasonably warm. 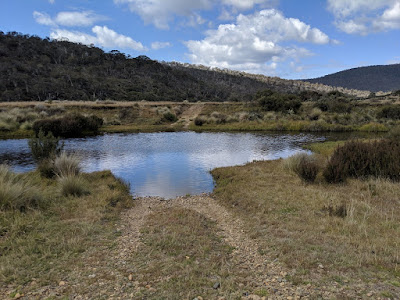 I reach Peden’s Hut in no time and sign the log book. These huts are well maintained and preserved by the Kosciuszko Huts Association (KHA), a volunteer group who wish to keep these huts in good condition but as historically accurate as possible. You are allowed to camp at the huts, but not inside except in an emergency. Needless to say I’m carrying a tent but if it’s particularly cold or windy or raining I’ll probably set it up inside one of the huts along the way! 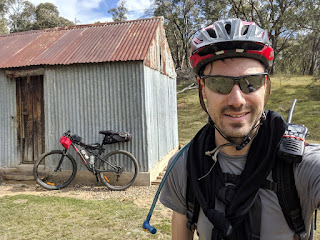 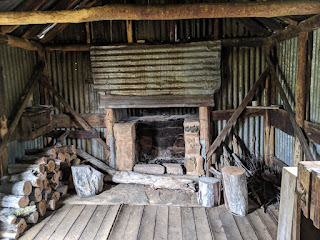 The next hut on my route is Townsend’s Hut, only a few kilometres down the track. 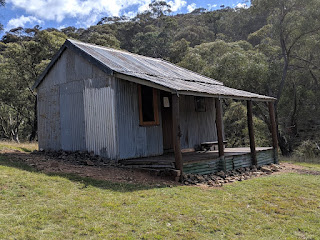 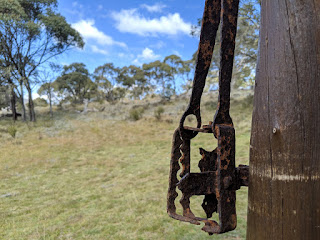 A couple more water crossings on the way here but my feet are already wet so who cares! 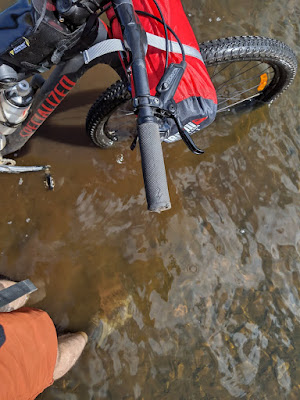 With all the faffing about to find the GoPro and first hut, I’m a little late to my lunch check-in with my parents at Murrumbidgee Crossing. Thankfully the radios are working perfectly and we get a solid range out of them, so by the time I reach them I’ve been in communication with them for nearly an hour. After lunch it’s back up the hill and continuing on Circuit trail to Circuit’s Hut. 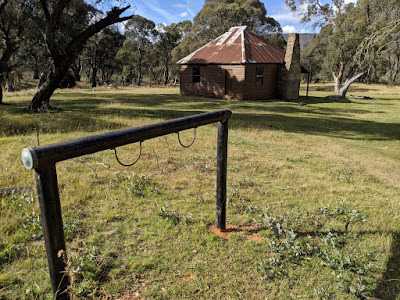 I only stop briefly at Circuit’s Hut as I realise I’m behind schedule. I’m not exhausted or sore, but I’ve stopped longer than I planned for lunch and I’d still like to get to Gavel’s Hut tonight. Barreling down the hill to Schofield’s Hut I stop dead in my tracks at the sight of a large group of horses. These ones aren’t wild, in fact they’ve got riders on them! I carefully ride a wide berth around the group to reach the hut and find out they’re on a day trip out here enjoying the country side. 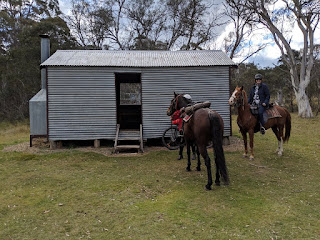 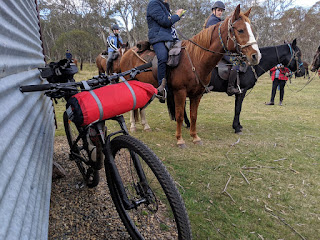 After taking a few photos of the hut I leave them in peace and head on my way, back up the hill and on towards Brayshaw’s Hut when suddenly I hear a strange noise coming from my pocket. I pull my phone out and find to my surprise that somehow I’ve actually got reception out here, in the middle of a huge plain. I make use of the opportunity to try sending an SMS to my support team. When that sends straight away I know this reception is for real and make a quick call to say hi to my pleasantly surprised girlfriend who didn’t expect to hear from me for a few more days yet! 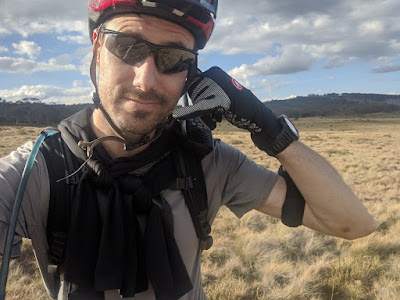 After a cute moment on the phone it’s time to really pick up the pace. I reach Brayshaw’s hut and it is tiny and boring, not somewhere I particularly want to stay the night unless I have to. 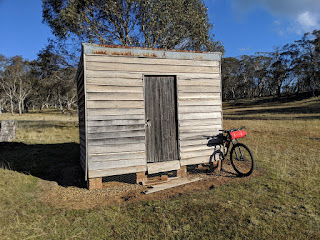 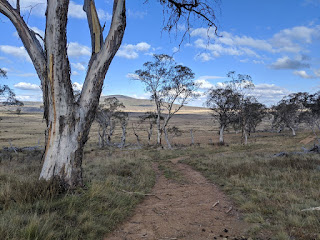 My goal, Gavel’s Hut, is only 11km further and it should be fairly flat so I power on and reach the hut just before 5pm as the sun begins to set. 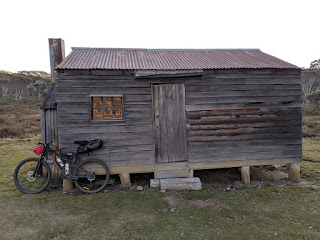 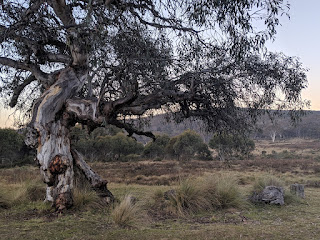 Gavel’s Hut is beautiful inside and has wooden beds so I decide to set up camp inside tonight. There is no one else here so it’s not like I’m stopping anyone from using it in an emergency. 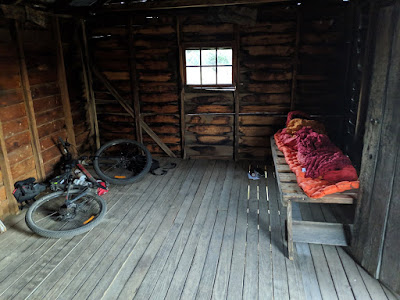 I make myself dinner, a freeze dried packet of Roast Chicken with mash and hit the sack. Another successful day, with over 60km travelled, so I go to sleep satisfied with my efforts but very much looking forward to my half day tomorrow!