February 06, 2019
Today we’re heading into Hobart, where our Tasmanian adventure comes to an end. The last mountain biking of the trip will be the North-South track descending from Mount Wellington to the Glenorchy MTB Park, some 560 vertical metres lower. 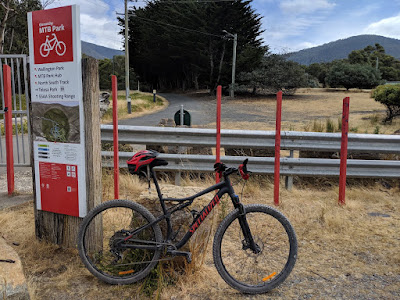 As this is a one way track, we did it in pairs with the other 2 driving around to the pickup at Glenorchy. As is usual the bravado prior to the ride we were discussing in the car on the way up whether or not the riders could beat the drivers to the other end. Upon closer inspection this worked out to be actually possible as the roads go down the mountain and around some 23km rather than the straight 10km line which the NS Track takes. At that point of the day Google Maps said it was a 40min drive so that was my time to beat!


The track itself is fantastic and well maintained, there are lots of natural features and beautiful mountain to ride down. The first third of the track had a lot of rocks, so ended up being technical in parts, but nothing too challenging which you couldn’t roll over so no real chance of injury. The next third was a bit of a climb, and although it looks like nothing on the elevation profile I can tell you it did get my heart pumping! The final third was more like a built mountain bike park, and coming into Glenorchy I have one piece of advice for you: Don’t take the A-Line. 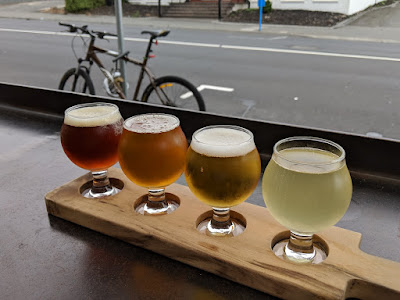 For anyone who mountain bikes and finds themselves in the Hobart area I would highly recommend riding this track at least once. I would happily do it again myself, however today my ride was slightly marred by a mechanical problem. Following on from the Maydena downhill trails, my brake pads were worn very thin and my front brake needed bleeding, so by the end of the north south track I was struggling to keep control and had to ride a lot slower than I would otherwise. Despite this I only narrowly missed my goal time of 40 minutes, coming in at 48.03. Guess you win this round Naomi & Nick (who were driving), until next time...
Mountain Biking Trip:Tasmania Overland
Location: Mount Wellington, Wellington Park TAS 7054, Australia