October 23, 2018
Today I arrive in Helsinki, Finland’s capital. It’s a cool 7 degrees but much more pleasant than the previous few days in Ivalo. Here we are, thankfully, well outside the arctic circle! 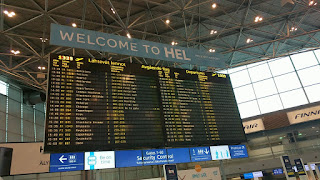 My brother and I are lucky enough to be able to stay with one of his friends while we are here, so no bare-bones hostel bed for me. Here we’ve got a warm bed, freshly baked sour dough, a fridge full of ciders and in true Finnish style, a sauna attached to his bathroom. We make ourselves at home and spend the evening playing some proper old school Playstation games like Crash Team Racing, and a personal favourite, Tony Hawk’s Pro Skater 2. 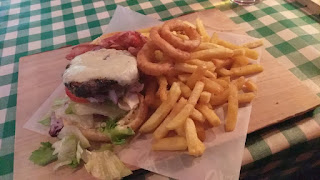 The next day we hit the city of Helsinki and explore for as long as we can put up with the pouring rain. After a pub lunch and a Finnish brand of cider, our first stop is a park between the main streets of Pohjoisesplanadi and Etelaesplanadi. Here we find statues celebrating the authors of the lyrics to the Finnish national anthem. 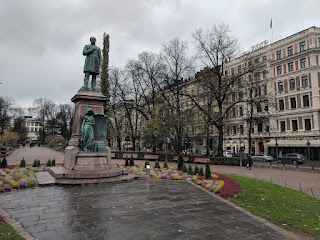 It appears that the things to see in Helsinki are the churches. There are 3 beautiful, but very different, churches in the central city area, the first of which is the Protestant Cathedral at Senate Square. It is a large and impressive building, but entirely white. The interior is minimalist, which I guess makes a lot of sense given that protestantism was initially a protest against the excesses of the Catholic church. 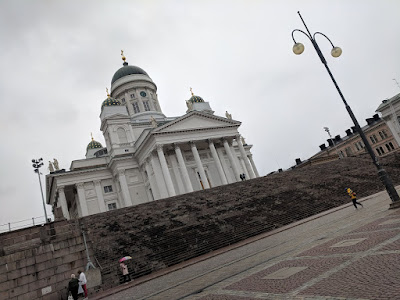 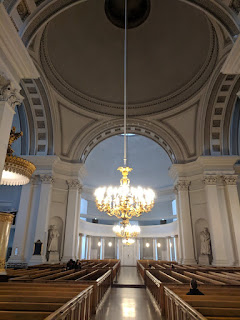 The second is the Orothodox church, up on the hill to the east of the city. It is smaller, but much more ornate both inside and out. 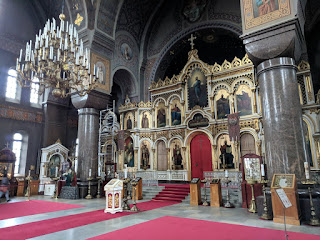 The final church we visit is the Rock church. Now I have no idea what religion this is based on (rock & roll perhaps?) but it’s uniqueness comes from the way it was constructed. It has been dug out of the rock, and built in the cavern. Most of the building is underground and the only exposed section is built with rock so that from the outside the only notable feature is a few glass windows to let the natural light in.

Apart from the parks and churches we did see one other, more touristy, attraction. The Flying Cinema is located adjacent to the Market Square by the water. Here you can experience in 4D (3D + movement and special effects) a flying tour over the city of Helsinki and surrounding areas. While yes this was quite touristy, the weather in the video was substantially better than today, so all in all not a bad excuse to be inside and out of the rain.

It was only a brief visit to Helsinki, but an enjoyable one. It was good to relax in good company, drink some ciders and have a bit of a laugh. My trip until now has been predominantly busy and hectic so Finland turned out to be a good chance to change that. Now I feel relaxed and ready for the next part of my adventure in the USA, which is of course planned to be busy and hectic again. Let’s go USA!
Trip:Europe2018
Location: Helsinki, Finland