The Canals of Venice

At the rest stop after leaving Rome, I had a small success. I went into the rest stop and bought a coffee and jam filled croissant without speaking a word of English. Okay, so it didn’t take a lot of words… Pretty much just hello, goodbye, thank you and the correct pronunciation of the labels next to the food, but I enjoyed it. I continued to the coffee bar to pick up my espresso, which I consumed standing at the bar like a true Italian. Grazie.

From here it was on to Verona, the city of love. This town is famous as the home of Romeo and Juliet, and the balcony which inspired Shakespeare’s most famous tragedy, although interestingly it seems Shakespeare never actually visited Verona himself…. Go figure. We visit the tourist trap…ahem… I mean balcony. There is literally a gift shop. *facepalm* 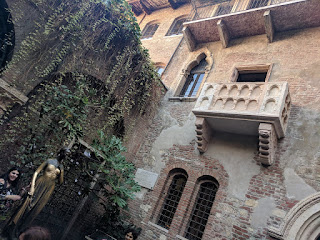 There is a statue of Juliet under the balcony (not on the balcony… clearly someone has their Romeo/Juliet roles reversed) and it is said to bring good luck in your love life if you rub the statue’s boobs…. Which must be true so obviously I did it. Not seedy at all! 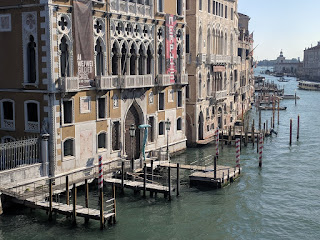 On to Venice, the land of canals and gondolas (the boat kind, not the aerial cable car kind… which I suspect wouldn’t handle those canals nearly as well). It feels like the set of a movie, but it’s beautiful and dirty at the same time. Especially the water. We explore the streets and canals and you can see why people lose themselves here- both in a spiritual sense and also the physical, the place is a maze!

After the obligatory gondola ride, we explore the city and see the cathedral in Saint Marks square, the shops on the Ponte di Rialto, and of course the obligatory climb of the tower. Much to my dismay this tower contains no stairs and I must take the lift. The view is spectacular across the islands of Venice but with no steps it doesn’t feel like I’ve earned it. 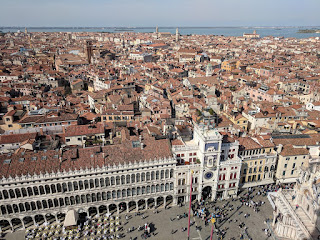 Speaking of looking like a movie set, we happen to run into one while we are on the island. It was an odd experience as we were randomly wandering down some streets then all of a sudden we come across a square where everything is destroyed. Chairs are knocked over, tables broken and rock debris strewn across the square. For a split second we think “what the hell happened here!?”, then we notice the cameras. Security move us around the action so we don’t really see much but apparently they are shooting Spiderman 2… but who really knows. 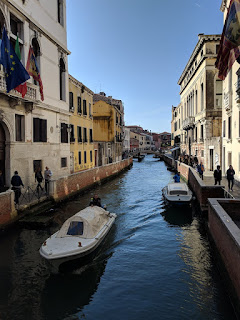 Back on the bus and the movie scene has inspired us to watch the old classic “The Italian Job”, which of course is set in Venice. After I get mocked relentlessly for not having seen it before, we watch it and constantly recognise places not just in Venice but other places we’ve been over the past 10 days. Naturally the movie ends with the guy getting the girl, so it was basically a rom-com.

Ciao for now Italy, I will be back!
Trip:Europe2018
Location: Venice, Metropolitan City of Venice, Italy