October 10, 2018
Last stop, Amsterdam and DAYUM is it good! In terms of the city, this is probably my favourite location of the Topdeck trip. It has the canals of Venice, feels real like Prague, has decent coffee like Italy, and best of all it is a judgement free zone like Berlin.

The Netherlands is full of tradition, and no visit would be complete without stopping at a traditional cheese farm on our way into Amsterdam. The guy who owns and runs this farm is quite the character, he speaks at least 5 different languages fluently as well as a few words in at least 5 more. Just to clarify, when I say “character”, I mean he is bat-shit crazy, but you know what, after 6 hours on a bus we probably seemed bat-shit crazy too and he made the experience quite enjoyable. As well as learning about the traditional dutch cheese making process, we also got to taste some cheeses and did I mention that this farm is also 1 of only 3 traditional clog makers? Ok, so I didn’t buy any, but it was still quite the interesting side note on our trip into the Netherlands- now bring on Amsterdam!

After a brief walk around Amsterdam the evening we arrive, we get up the next morning ready to do that thing which EVERY traveler to Amsterdam does. Look, I understand it’s not everyone’s cup of tea- and yes there are some other countries governments who like to put bans on it, or at least discourage it legislatively to the point where its implausible to even try, but here in Amsterdam it is simply the done thing. I am of course talking about cycling. 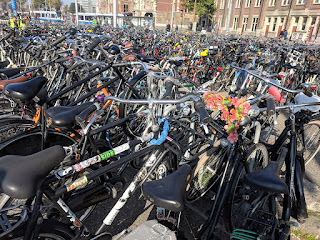 Everyone here rides a bike, barely anyone drives, and I love it! Our bike tour takes us around the city and past the main sights to see with recommendations for the what to do after bike tour is over. The Netherlands is one of the flattest countries in the world, and combined with old narrow laneways and major roads with real cycling infrastructure, this makes Amsterdam an easy place to cycle. There is no pretension, no lycra, no abuse from 4 wheeled motorists and best of all, no mandatory helmet laws. While I’m a fan of wearing a helmet when in Sydney, that’s because 9 times out of 10 I’ve got to be on the road, and even when there is a segment of cycle lane, it doesn’t link with other segments and it isn’t separated properly from cars. Don’t even get me started on how pedestrians treat it like a footpath rather than a roadway and just step in front of you… they are more dangerous than the cars! Here in Amsterdam helmets are not mandatory because they simply aren't required for most short trips. Turns out fairly logical, huh? Weird.

After the bike tour we ask our guide for directions to a nearby cafe (note: not coffee shop) and I enjoy a hard earned coffee and cake. I was served by a traditional Dutch hipster, and I could not have felt more at home. 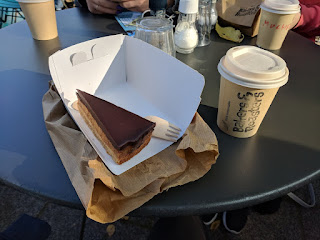 Next stop is the A’Dam tower, right on the river in the heart of Amsterdam. The view from the top of this building is amazing in every direction, and reinforces how flat the whole place is. A lot of the farmland is reclaimed by digging channels and pumping water out of the swampy marshes, but it’s also evident that parts of the city were reclaimed and some are still supported on wooden poles like Venice.

As well as a spectacular view, the A’Dam tower hosts the OverTheEdge swing. For those of you who still love sitting on the swings in a children’s playground as an adult (usually at night after a few beverages), this is a dream come true. It is basically a giant swing set that lets you swing out over the edge of the building, where you can look down and see the streets below or look up and enjoy the view with almost nothing around you. At only 5 euros, I rate this as one of the best value for money experiences in the entire trip.

As well as a spectacular view, and a swing set, the A’Dam tower also has a bar with burgers and bean bags to lie down in. Today might be full of fun activities, but to just lie down, relax and enjoy the sunshine was exactly what Amsterdam was about. 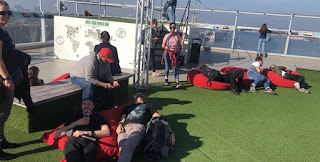 After exploring a bit more of the city we visit the Moco Museum, where there is currently an exhibition on the street art of Banksy. I was already a fan of Banksy’ work, but to actually stop and read the stories behind these works was well worth it. 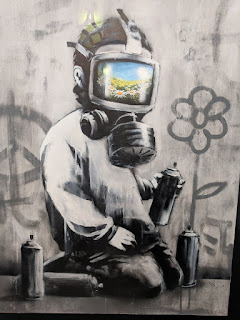 There was one last stop before we headed back to the hostel today, and that was the usual tourist trap of the “I Amsterdam” sign. However upon closer inspection, unlike every other tourist sign like this, you are actually allowed (encouraged) to climb on it. Doug and I just look at each other across the group, and it’s on. We climb various letters and get various nice photos before realising it would be kind of cool to run along the top from end to end. We practise a couple of moves at various points including the I-A transition and overtake maneuver at the top of the D and then we’re good to go. We con a friend into filming it for us, but no matter how much we try we can never get a very clean run because of all the other humans. Thankfully we happen to come back past the sign later tonight when it is empty and the backlighting actually made it look pretty cool.


Tonight is the river cruise through the canals of Amsterdam, and the last official group activity for our Topdeck trip. With the whole boat to ourselves, candlelit settings, and unlimited wine it’s safe to say that everyone had a good time, but this was also when we started to realise that the trip was actually over... this was literally our last night together. Following the cruise we hit a Shot Bar with over 150 different shots. I will describe 3 that stood out to me, however I may or may not have tried a few more.


After an epic last night out, it was back to the hostel and back on the bus the next morning. The final bus trip back to London was an emotional one for many of us. Many a silent tear was shed and longing looks both out the window and at each other were rife. Once in London we went to dinner with the knowledge that this was the last time this particular group of humans would be all together as a group and we would sorely miss each other. 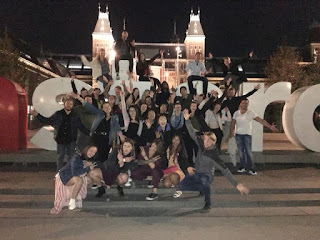 I started this tour hoping to make some new friends, maybe have some which I could visit in future travels if I needed a place to stay, but what happened caught me entirely off guard. I’m a fairly unique human, I have an intense passion for things that I love and I don't have a lot of time for people who tell me what to do or get in the way of achieving my goals. While I have no trouble getting along with others and being friendly, the people who I genuinely connect with are often few and far between. As well as making 37 new friends who I would happily catch up with and visit on future trips, I have been lucky enough to find half a dozen of these humans who I really click with. Whether it be sharing my passion for adventure, my passion for music, my passion for adrenaline or my abominable sense of humour, some of these humans will play significant roles in my life from here on rather than just simply travel buddies.

Thank you to everyone who was part of my Topdeck tour, you have been an incredible bunch, I would not have traded our group dynamic for anything in the world. But to those special few, and you know who you are, thank you for being my kind of crazy, you won’t be forgotten.