July 28, 2018
Queenstown is basically what I would be if reincarnated in the form of a city. It's full of mountain bikes in the summer, snowboards and skis in the winter, and its the all purpose adventure capital of the world. Immediately following my 2 days of riding the Queenstown MTB trails, I swapped the Specialized bike for my Burton board and hit the slopes.

My first day was at The Remarkables, a 45min drive out (and up) from Queenstown. It was a sunny & clear bluebird day, exactly as forecast by the (always reliable) advice of that-guy-I-met-last-night-at-the-hostel-bar. (Cheers Adam, if you’re reading this). With 15cm of fresh powder, it was almost too good to be true, lets recall that back home in Australia snow falls like, well hail, and any day that the ground is covered in snow, not ice, or grass, is an “epic day on the slopes”. But this day was real, and it lived up to its name: Remarkable. 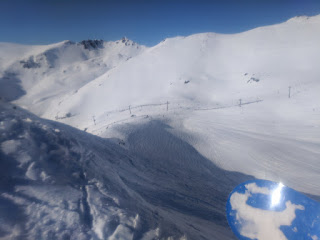 I wasted no time and hit the slopes, accidentally forgetting to start Strava for my first 4 laps of the Curvey Basin chair, however no great loss- they were the warm up runs anyways. After that I traveled a solid 40km, comprising of 3,677m vertical taking as many different paths down the bowls of Shadow Basin chair as I could manage. The views from the top speak for themselves.

The next day was equally as remarkable, another bluebird day. I took it a bit more relaxed, covering 43km with 3,880m vertical in total, having stopped a few more times to enjoy the view. My max speed was similarly a little lower today at 61km/h rather than the first day’s 66km/h. Today I was in holiday mode, and I couldn’t help but stop, enjoy the serenity, and of course take a selfie. 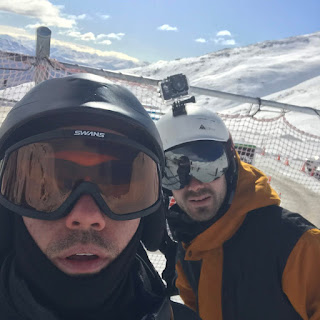 The afternoon I spent at the terrain park. Having found my feet in the powder at the top of Shadow Basin, I latched them firmly into the bindings of my Burton Custom and hit every combination of flat boxes, angle boxes and small jumps which the easy side of Sugar Bowl chair would allow. Although there is a lack of photographic evidence (as I was too busy riding to film), I enjoyed the successes of:
I also managed to ride some wide flat boxes switch (goofy), but the illustrious 180 off the end only ever managed to be 180° upside down rather than the planned front to back.

The 3rd day on the slopes was at Coronet Peak. An enjoyable and large resort area to be sure, but a bit too open and boring for my liking. I would prefer more variation, some tree runs, some terrain park, rather than just continuous rolling hills. Having said that, the day was also not amazing (high wind, low visibility, snowing all day) so that may also be affecting my judgement.


Still an enjoyable day taking 41km of different paths over the hills (wind hold permitting) hitting an impressive 5,088m vertical in just 7hrs before pausing for the white out snow storm in the afternoon.


And THEN the fun begins- NIGHT SKIING. After a break for dinner, and letting the storm clear somewhat, I went back out and enjoyed a further 3 hours of snowboarding at night. The slopes were well lit in the available areas, which is an awful lot of the slopes to be honest, at least the middle third, if not more. 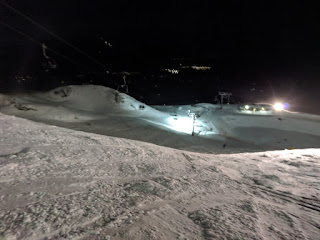 It was great to get another 23km of boarding in after the miserable afternoon snow storm. With 2,737m additional vertical metres, that makes it a hell of a day, and that's before realising I travelled at 43km/h sliding down a mountain... on a single piece of fibreglass… in the dark.

On my last day in dear old queenstown I found myself back by popular demand (3 votes to none) up at The Remarkables. I’ve had an amazing trip with 2 of my best snow buddies (shout out to Marcus & Rose!) and unlike a certain A. Ham. I am most definitely satisfied. I re-do some of my faves in the morning, hit the park for a couple more unintended aerial inversions (stacks) and finish off the day by taking one run that I hadn’t gotten around to yet, “Serpentine”, out wide from Sugar Bowl chair. I avoid the crazy big park obstacles, but enjoy being dwarfed as I ride past them. The last of which is a tabletop to pop off with a flat landing, but I decide at the last second to abort... and immediately regret it. So I do the run again. Table popped, 43km boarded / 3,963m vertical boarded, last run clocks in at 54km as visibility disappears, and I call it a day.


After a total of 200km of snowboarding, descending a whopping vertical 20,000m, I call it a week and fly home. Until next time Queenstown. 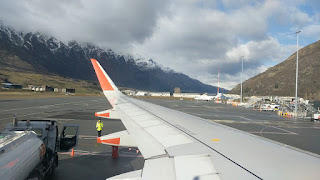